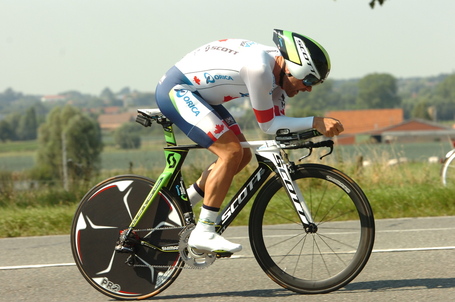 Canadian Svein Tuft extended his personal winning streak against the watch to four races with a powerful five-second victory over BMC's Taylor Phinney, putting the Orica GreenEdge rider into first overall heading into tomorrow's conclusion on the famous hellingen of Flanders. Phinney's time had held up until very late into the race, but Tuft, his nation's champion in the event as part of his winning streak, had a little more. His team's victory in the TTT meant he took the overall by five seconds over Lars Boom of Rabobank, who was third on the stage.

Omega Pharma Quick Step saw their tactical advantage disappear when overall leader Tom Boonen dropped more than a minute on the stage. Niki Terpstra also failed to stay within range of the overall leaders, leaving Sylvain Chavanel, 20 seconds back of Tuft, as the team's top threat. All of those riders could win the stage on the Muur van Geraardsbergen tomorrow, in what promises to be a dramatic, all-out battle. But they'll have to drop Tuft and Boom in the process, with the former being likely, as Tuft acknowledged. But Boom is a cobbles rider first and foremost, and while OPQS can attack him with several riders, the large time gaps on GC mean that Boom just has to stay close to Chavanel, for the most part. Results:

A quick preview: tomorrow's stage is 214 kilometers, about 50 less than the Tour of Flanders, but features 15 rated climbs plus a finish halfway up the Muur van Geraardsbergen. Also included on the circuit are the Leberg, Tenbosse, Eikenmolen and Valkenberg -- none of which are cobbled, but each of which is a stage on the Way of the Cross. In other words, they'll hurt, even if they won't be too dramatic. The last passing over the top of the Kappelmuur is at 186km, 28 km from the line, with two small climbs and the finishing half-Muur remaining, so there should be plenty of fireworks by then.