Greetings all Humans! And also Hoosiers, Swedes, and Seattleites!

Tomorrow-finally!- is time for my favorite race of the year! Let me re-introduce myself. I am Txirla, the Basque Bivalve, the Climbing Clam, the Slimy SanSebier! It is my pleasure to host this event and to bring to you this very special preview with my friend ursula!

ursula: So Txirla, I just can't get a feel for this race with its different calendar slot. Not being in its usual place a week after the Tour and instead being four days before the Vuelta. I can't decide on what that means. Txirla, you got to have some insights on what the change in date might mean.

Txirla: Of course, of course! I know what will happen. But to explain it to you, we have a very special guest with us today to handicap..

ursula, interrupting, hands on each cheek, mouth open wide: OHMIGOD!!!! ITS ITS ITS SAV... 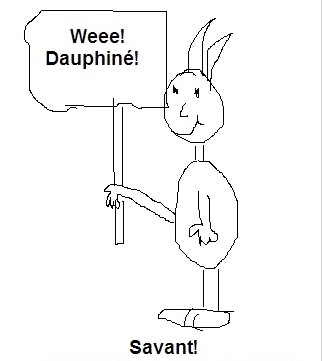 ursula, totally speechless; Txirla, flapping its valves in a slightly disconcerting way. Finally ursula speaks: Savant! The Official mascot of the Dauphine! What are you doing here?

Savant puts down his sign which makes Txirla even more exicted, reaches into his...pocket and slowly pulls out a pair of scissors and a Partagas #2 cigar. He snips the tip, fires up a match and spends a minute lighting the cigar and enjoying the taste.

ursula, still slack jawed (and no that's not normal): Hi Savant! Where have you been?

Savant: Oh laying low to avoid the Swedish-Hoosier-Seattleite anti-mascot conspiracy that's gripped the cycling world the past couple of years. Especially that maniac Swede! Just last month he enlisted some silly Swiss/Canadian guy to go huntin' for mascots during the Tour. Imagine! I can never watch the Tour because he might be there! Those people are as evil as they are desperate!

ursula: I can understand about your problems with a particular Swede. And don't get me started on certain Seattle people. He's got Farrar while while I got Horner. Case closed right there! But the saddest thing is that he has yet to climb Hurricane Ridge. But what do you have against Hoosiers?

Txirla: I'll take that. Insatiable appetite for all things exotic. They eat anything and everything. Did you see Pirates! Band of Misfits!? That's a true story! Its a documentary except they changed the bad guy to Queen Victoria from a certain book writing, clam eating Hoosier maniac. And word under the sea is that she would like to make Savant into a pair of shoes and use the rest of him for special book covers! THAT'S NOT GONNA HAPPEN!

Savant: But nothing could keep me from this race and the local Basques appreciate a mascot. No Hoosiers or Swedes or Seattleites are allowed here. Plus we got an absolutely stacked startlist. Txirla, what do you think?

Txirla: Oh to be sure, a very interesting edition of the race. Traditionally this is a race devoted to the summer: the sun, the beautiful Bay of Biscay, the pretty town, the non-seafood eating...As such the race takes itself as one should take life itself: with a large dose of humor, reflection, and casualness.

To be sure, the winner and the top riders tend to sweat as they do in all races and you never know who will win it until it happens, but for the rest of the peloton? The race is for pleasure and when it stops losing its appeal then its time to get off one's bike and find other adventures.

Txirla makes a face-yes clams can make faces!, while Savant interrupts while blowing cigar smoke at ursula: ursula, you should pray that your next life should be something higher than a human. Like a real bear. Don't you like salmon? Ahhh. You know so little! Life is more than numbers and stats! Yes, there are abandons-the Jaizkibel is one tough mountain to climb in mid-summer! It is understandable to have a rider come to its base, look up at the climb, look down at the inviting beaches, and decide that he needs more than an arm tan! Life is short-you must enjoy it when you can!

Txirla: besides the different spot on the calendar changes the dynamic of this race completely! Four days before the Vuelta! Most of the riders this year will also be at the start in Pamplona just an hours drive away! This year the race is practically a prologue of the Vuelta! More riders than usual will be testing themselves to the limit. The Jaizkibel is the perfect last minute tune up for this very climby Vuelta.

Txirla: And they are up against this: 234 km of heavenly hell:

Whoever conquers that will be a hot favorite for the Vuelta, my friend.

ursula: Okay, you've convinced me. This should be one great race! But you say there's other opinions?

ursula looks down and sees... Cuddles! Hey buddy! What brings you down from land of vertically challenged bike racers?

Cuddles: Need some sun, son! And besides I've got some Basque cobble cousins I'll be visiting. Now that the Muur race is over and what with the way that guy Bert handled the Muur, I decided to check out some riders with real climbing chops. I kinda doubt that this race will be much though. Riders will be restin' up for that bigger race in four days. It might seem like there's a close race happening but the reality is that the riders might not be riding all that hard until the end. But you never know. I'm kinda interested if Sky is gonna try their train thing here. Not sure if that's gonna fly in the Basque country.

ursula: So then. Any of you care to predict a winner?

Cuddles: Nah. I might say look to a rider who isn't riding the Vuelta. Vinokourov, perhaps. He doesn't need to hold back anything.

Savant: Non. Very tough race to predict. Cuddles may be right-a non-Vuelta rider. The kid with hte amazing pedigree, Moser, also fits Cuddles' description...perhaps since the Vuelta is so climby this year, a less climby guy like Gilbert. He's not defending his title and Lulu also isn't here, but someone like them. Chavanel? Cuddles nods Yeah he is due for a big win and this would be the biggest of his career. Plus he isn't racing the Vuelta. But...looks at Txirla

Txirla: Look at the calendar my human friend. This one day Classic is unlike any other because it sits alone on the race calendar. Regardless of if it follows the Tour by a week or proceeds the Vuelta by four days, it sits alone on the calendar. For the spring classics, they come so thick and fast that you easily see which riders are building winning form. Doesn't make them less exciting but predicting is easier....

Cuddles cuts in: Easy enough that a guy from Seattle of all places can guess pretty accurately. I tell you...Seattle? Seattle? SEATTLE? Every spring I try to educate that Seattle guy and every year he disagrees with me. Yeah, he's usually right, but...

Txirla: Ahem. As I was saying. Same is true for the fall classics: there's a bunch of them and even though their variety is greater than the spring, you can narrow your favorites to a few with only the occasional shock win like in last year's Lombardia. San Seb is different because of the Grand Tours. The one day races that come after San Seb, Vattenfalls and GP Ouest France-Plouay, well Vattenfalls is strictly for sprinters, while the other one is like San Seb: unpredictable. And this year's Olympics was too flat to predict anything here. The only safe thing you can say is that there won't be a sprinter specialist winning here. But there might be a small bunch sprint this time like in 2008. I can see that. 10-15 riders make the finale.

Savant: Hey Cuddles! I got a story to tell ya: A guy walks into a bar carrying a cobble under his arm. He tells the barkeep, "Gimme a beer and one for the road."

Cuddles: Yeah, yeah. You know that's actually a true story! I get more beer that way...

Hey! Speaking of beer, how about the four of us get some tapas, down a few beers and just hang out? Talk about old races and argue on who's gonna win the Vuelta.

Txirla looks at the ground, Savant puts his arm around ursula and says: My friend, yes-lets find a place that we can share some non-seafood, preferably of very small particle size then we shall part and call it an early night. Cuddles, Txirla and I have some catching up to do with some other friends of long ago who've been lying low...come along...