Preview: Vårgårda Weekend - two World Cups for the price of one!

Share All sharing options for: Preview: Vårgårda Weekend - two World Cups for the price of one!

We've had a long break since the last round of the Road World Cup, while the riders contested the biggest stage race of the year, the Giro Donne, and then raced the Olympics in front of the whole world; but the next two weeks have not one, not two, but three rounds, in quick succession - starting with the two Swedish races at the Open de Suède Vårgårda.

The first is a Team Time Trial, which should give us an idea of what could happen at the World TTT Championships next month - and then on Sunday, it's the road race. I'll tell you all about them below the jump, and remind you of what's happened in the World Cup so far - but first, here's video from last year's races, to give you an idea of what to expect:

This is the only standalone TTT on the women's calendar, and it's always hard fought. It's 42.5km long, and follows the traditional course for the race - starting in Vårgårda with a little loop through the town, then out on the long, straight road to Herrljunga for around 14km, turning in the town through some twisty technical corners, then back down the same road through Vårgårda again, with a loop out to Hägrunga, and back, over a 50-ish metre climb in a kilometre as they cross Hägrunga Hill, then finishing where they started. Here's the map and profiles, from the race technical guide: 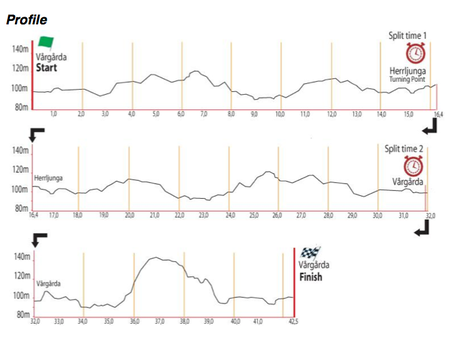 As you can guess, there's a lot to challenge teams there - riding TTT isn't something that happens very often in men's or women's racing, and that long straight road is always windy. If you have a helpful tailwind on the way out, you're fighting it on the way back, and if you don't get that, it hits you from the side all the way - and then there's the climb - short, but sharp.

The TTT has been running since 2008, and for the first three years it was dominated by the Cervélo Test Team, whose team were so beautiful to watch, making it look easy. Don't believe me? Check out their Beyond The Peloton video about the race from 2010! (You'll also get to see Kirsten Wild laughing about what it's like to ride behind Emma Pooley). The second-best TTT team for all those years was HTC... but last year everything was shaken up, and HTC stepped up in a major way - and since they've been Specialized-lululemon, they've dominated every TTT they've raced. They start as the team to beat, but can they manage it? AA Drink-Leontien.nl reunites a lot of the old Cervélo riders - and since the team has announced it will fold at the end of the season, they'll want to go out with a bang. Orica-AIS will be super-strong, with Judith Arndt the powerhouse of women's time trialling. And then there's Rabobank... Marianne Vos will be driving them on, and no one has the force of will that Vos does!

The race will kick off at 17:30 CEST - come back to the comments section for the results!

After a day off (and I'm hoping for the now-traditional tweets from riders bumping into each other in the same pretty coffee shops as they recce the course), it's time for the World Cup Road Race.

The Road Race also follows the same course as previous years. It's 12 laps of an 11km circuit, 132km in total, and riders will know the roads well, as the circuit is the final loop of the TTT course. Here's the map - the profile is the same as the final picture up above 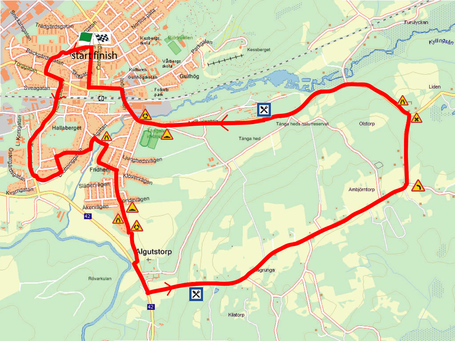 The race is tough, but the climb isn't enough to shake off the top riders, and it tends to be won from a bunch or group by the tough-as-nails sprinters, EDIT! although last year Van Vleuten won from a long-range attack (thanks FH). The race began in 2006, when it was won from an attack by Swedish double World Champion and all-round superstar Susanne Ljungskog, but check out the podium from the last three years:

So, Dutch riders who can get over the hills and then finish in a full-on, elbows-out, fast and furious aggressive sprint do well here. It's such a hard race - but so much fun for fans! And of course, you'll always have the riders who don't want to leave it to the sprinters, and who will attack throughout the race - maybe this year it will work for them, too?

For more of an idea on what it's like to race this one, check out the video at the top, or the Beyond The Peloton video from 2010, when Wild won for Cervélo:

(Can you tell, I still miss the Cervélo Test Team?)

The startlist has far too many riders on it, but look out for Wild, Vos, Van Vleuten, Johansson, and all the usual sprint suspects - especially Ina-Yoko Teutenberg from Specialized-lululemon, who says she'll retire at the end of this year, and hasn't won this one yet, and Adrie Visser, riding for Skil-Argos.

In 2010, there was a clever combination of radio coverage (in Swedish) cutting to live shots from fixed cameras at different parts of the course, as the peloton passed though, on Vårgårda.nu. I've no idea if we'll see anything like that this year, but their twitter has been good for updates, and hopefully our favourite Swedes will tell us in the comments if they find any other coverage.

Speaking of the helpful Swedes, you can see photos from last year's race from our own Jens and the Figurehead, Swedish photographer Christer Hedberg, and the race website. Isn't it great? And of course, anything else we find before or after the races, in the comments.

What Vårgårda means for the Road World Cup

Generally, with three races to go, Vårgårda is an important chance to try to shake up the World Cup standings - but I have to be honest, it really does look like Marianne Vos has this one sewn up. Here are the overall standings after five rounds:

Yes, it will be very, very hard to stop Vos - although Arndt and Johansson will do all they can to try! If you're new to the Road World Cup, and want to know how we got here, there have been four Spring Classics - the Ronde van Drenthe in the Netherlands, the Trofeo Alfredo Binda in Italy, the Ronde van Vlaanderen and the Flèche Wallonne in Belgium - and a sprinters' race, the Tour of ChongMing Island, in China. You can watch the UCI-commissioned videos - 15 minutes from each race, narrated by Eurosport's David Harmon, right here - damn, there's some great racing there!

If you have any questions, or want to know more, get down to the comments and join in the chat. It'll be an excellent weekend of racing - and the following weekend it's the final World Cup, GP de Plouay, which we should get to watch live....