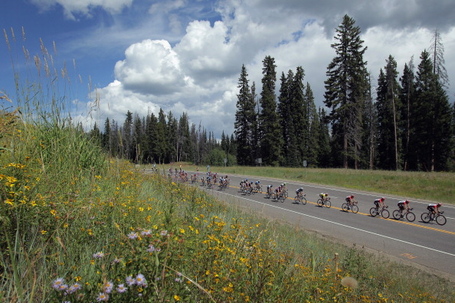 The USA Pro Challenge rolling through the Colorado mountains in 2011. Photo: Doug Pensinger/Getty.

The USA Pro Challenge begins on Monday in Durango, Colorado. The seven-stage race starts in the southwest corner of Colorado, climbs to dizzying altitudes, and finishes with a time trial around Denver. For American riders, this race has become a favorite. It offers a chance to race on home roads in front of families and friends. Expect the major climbs to be choked with fans, especially when the race visits cycling-mad Boulder.

Though the fans will be partying, the riders will have some work to do on this course. The main challenge of the USA Pro Challenge is the altitude. Denver sits at 5000 ft (1524 meters) above sea level, and much of the race will unfold in the thin air above 8000 ft (2400 meters). The highest point in the USA Pro Challenge is the 12,126 ft (3696 meters) summit of Cottonwood Pass. Drop that climb down in the middle of the Tour de France and it towers over the massive col de Tourmalet, which summits at 6393 ft (2115 meters). This Colorado place, it’s way up in the air.

The opening stage runs 202 kilometers from Durango to Telluride and includes three categorized climbs. It’s too early for a general classification battle, but the climbs late in the stage could launch a successful breakaway. This stage could also follow a similar pattern to the opening stages of last week’s Larry H. Miller Tour of Utah and finish with a sprint from a select group of race favorites.

After a short transfer, the second stage begins in Montrose. The course traces an arc around the Gunnison National Forest, and finishes in Crested Butte. Two short, steep climbs open the hostilities at Cerro Summit and Blue Mesa Summit, but much of the stage looks almost relaxing. There’s a sprint line in Gunnison, then it’s a gradual uphill grind to Crested Butte. The stage finishes with around five kilometers of climbing. The time gaps will not be huge here, but none of the general classification riders will want to be caught sleeping.

With stage three, the real racing begins. The stage runs 210 kilometers from Gunnison to Aspen. That sounds simple enough, right? Not so fast. The stage runs over two truly ginormous passes: Cottonwood Pass (12,126ft) and Independence Pass (12,000 ft). For added fun and games, the climb to Cottonwood Pass runs over unpaved roads. With the elevations of these passes, weather could play a role as late summer thunderstorms are common in the Colorado high country. The stage finishes with a descent off Independence Pass to Aspen, and only a small group should survive to contend for the stage victory.

As if it were not enough to climb Independence Pass once, the riders wake up to climb it again at the start of stage four. The stage runs 156.4 kilometers from Aspen to Beaver Creek. It is a relatively short stage, which won’t offer much chance for the breakaway riders. The good news is, after they summit Independence Pass, the riders race over rolling terrain until they reach the short climb up Battle Mountain at kilometer 132. From there, it’s all descending until the final kilometers. The climb to Beaver Creek runs about five kilometers and looks a lot like the finish in Gunnison. The contenders for the overall have to pay attention here, and it should be a select group racing for the stage victory.

After all that climbing, this stage five will come as something of a relief. The stage runs mostly downhill over 189.7 kilometers from Breckenridge to Colorado Springs. This is still Colorado, so it’s not all flat fun and games. The stage begins with a climb up Hoosier Pass, and there are a few speed bumps along the way. The final 30 kilometers of the stage run mostly flat, so the sprinters should finally have something to celebrate when the race reaches Colorado Springs. There are some tricky roads on the run-in to Colorado Springs, though, which may favor a late, cheeky escape.

Stage six may not be the hardest stage of the race, but it will almost certainly be the craziest. The stage runs from Golden to Boulder. Boulder, there’s some people there who like cycling, and the stage finish is on Mount Flagstaff, a favorite climb for local boys like Garmin-Sharp’s Pete Stetina and Tom Danielson. It all starts innocently enough with around 30 kilometers of rolling terrain. It doesn’t last, and the race climbs Boulder Canyon and crosses the Peak-to-Peak Highway. After a long descent, a short climb up Lee Hill Road announces the run-in to Boulder. The stage finish comes after eight kilometers of climbing on Mount Flagstaff. It’ll be a madhouse at this stage finish.

The final stage of the USA Pro Challenge almost feels anticlimactic after all the mountainous terrain of the previous six days. The race concludes with a 15.3 kilometer time trial in downtown Denver. This one should be a crowd pleaser. It’s short, but if the time gaps are still close after all the climbing, this stage will decide the overall. The profile is almost completely flat and this is a race for the specialists.

Both motivation and acclimation always play a role in a race like this USA Pro Challenge. While their grand tour pedigrees might make Vincenzo Nibali or Cadel Evans the favorites, the overall title may well go to one of the local boys who have grown up riding these high elevation passes. Tejay van Garderen, Levi Leipheimer, Tom Danielson, Christian Vande Velde, Matthew Busche, and Chris Horner all look good for this one, and they will be racing in front of home crowds.

Last year, Levi Leipheimer won by 11 seconds ahead of Christian Vande Velde. Tejay van Garderen finished third at 17 seconds, and Tom Danielson was fourth at 21 seconds. The Liquigas-Cannondale Italian duo of Vincenzo Nibali and Ivan Basso could break the American hold on the top of the classification, but the podium is likely to look pretty similar to last year’s race.