As I was going up the stair, I met a race that wasn't there

Share All sharing options for: As I was going up the stair, I met a race that wasn't there

I had an obvious angle to start this preview with.

Following the recent debate over what team and race sponsors get in return for their money, it seemed somehow quite fitting that the very next race on the calendar should be this year's Trophee d'Or. Otherwise known as the invisiblest race on the calendar, given the massive difficulties we and others have had in finding any information in recent years. Take for example Vicki Whitelaw's husband's lament back in 2008:

Vicki is off at another stage race, this time in France. Not exactly sure where in France as the Trophée d’Or Féminin is flying under the radar. It is a UCI ranked race (2.2) but there is nothing about it that I can find on the web. NOTHING! It doesn’t seem to have its own web site, cyclingnews.com hasn’t put up results for the first stage (though they might do so yet) and all the references I can find when I google it are either results from previous years or someone’s calendar suggesting that it will be on again this year.

But then something very odd happened. Maybe it's the littlest Whitelaw has superhero powers, or maybe it's just the heat.

I don't want to query why too much, but first the ever brilliant Gwena managed to get hold of an electronic copy of the race manual (click on the picture to download it), and then a real, genuine, proper website. And we even have a start-list. Mother of Mercy, is this the end?.

So where is the race? Right in the very centre of France. Six stages and almost 500km of racing squeezed into five days and a radius of 50km from Bourges cathedral, with over 4500m of climbing and 19 hills that count towards the QOM prize. Those last two figures could mislead you into thinking that this is a particularly mountainous race, but that's not the case. Viciously lumpy would be a far fairer description, as the highest climb ascends just 130m, only two others go more than 100m up, and a couple seem to be there from fond childhood nostalgia. 2km at 2% would have terrified me too, when I rode a tricycle. It's not a race for the sprinters or the mountain goats, but instead a stage race for the one-day race specialist. Riders like Emma Johansson and Noemi Cantele have done well here in the past. 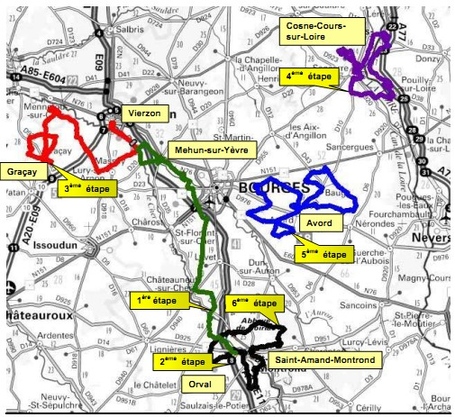 Things kick off at 16:20 local time Saturday afternoon (late starts are another feature of this race - don't be surprised if someone answers your "who won today?" question with "they haven't even set off yet.") with a road trip from Saint-Amand-Montrond to Mehun-sur-Yevre (the green stage on the map above), with a couple of bumps out of the many en route marked out as Cat 3's.

Sunday is the one day where the peloton doesn't get a chance for a lie-in, with a 9.6km team time trial at 10:15 around Orval, close to the start of stage 1, followed by a trip after lunch to Vierzon, by stage 1's finish, to ride a convoluted 95km to nearby Gracay. The short section at 8.5% right before the last km ought to bring some of the big names to the front.

Stage 4, a loop beginning and ending at Cosne-Cours-sur-Loire is the queen stage, with five cat 1 climbs and one cat 2. None are longer than a km and a half, but they are all in th 7-8% range which should tempt plenty of attacking. Thunderstorms, flash floods and landslides added to the excitement last year. With temperatures predicted to hit 40, some may find themselves wishing for more of the same.

Stages 5, a figure of eight centred on Avord, and 6, a loop starting and ending at Saint-Amand-Montrond, are a bit calmer but there are still seven categorised lumps to cross, so it's not over till it's over.

Seventeen teams are listed on the provisional startlist (Top Girls get a bit lost on the formatting), but as ever no-one knows for sure until the riders actually sign in. A lot of the top teams are in Vargarda for the World Cup, but there is a healthy French entry, with Vienne Futuroscope, ASPTT Dijon-Bourgogne, and Bigmat Auber 93, many of the Italian teams, including Be Pink, the ladies who don't lunch, Faren Honda, and Vaiano Tepso, have been persuaded to make the trip, and a large lowlands contingent have come too, including my tip for the win, Anna Van der Breggen of Sengers Ladies.

We'll try to bring you other news as and when it arrives, but be warned that it often doesn't. Or at least not particularly promptly. The Twitter account of ace boy reporter (sans chien) Bart Hazen is probably the best place to start. Video? How about I play the judge and you pretend to be the Apple lawyer?