On the Ground at USA Crit Nationals

Share All sharing options for: On the Ground at USA Crit Nationals 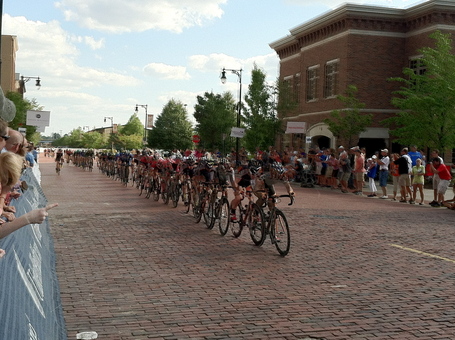 Where most countries have two national championships for road cycling that garner much attention - a road race and time trial - the United States has three. The reason is perhaps less due to the extraordinary love of bicycle racing this country has, for we pale in comparison to the countries in cycling's homeland. Instead, we have a national championship for the criterium to celebrate this distinctly American form of racing. Other countries have criteriums, certainly. Great Britain has its Tour Series that draws crowds and the biggest domestic teams. The mainland has its post-Tour criteriums, celebrations of riders' accomplishments and a chance for the fans to get close to their heroes for up to two hours of racing.

But in these countries, criteriums are still a side show, a venue to draw the public in while teams and riders are not off competing in road races, stage races, and the like. In America, crits are a lifestyle, the bread and butter of our bike racing, a personification of our approach to many aspects of sport: short, fast, powerful, exciting, and then over to let us move on to the next thing.

Crit nationals are held on a different weekend as the national championship for road and time trial for the professional men (though juniors, U-23, and women race all three over the same week). This year, like last, it was held in downtown Grand Rapids, Michigan, the classic Downers Grove venue in Chicago discarded in favor of bricks, new crowds, and new sponsors. And, because Grand Rapids is a mere two hour drive from my place, I was on hand to watch the racing.

While I have never been to Downers Grove, the venue in downtown Grand Rapids provided a good course and nice backdrop for the racing. Eight corners were on tap this time, along with two sections of not always smoothly laid brick on the back straight and the finishing stretch. While not cobbles, I have raced on the course and know it is sufficiently jarring, especially in the 100m immediately before and after the finish. Adam Meyerson quipped the day after the race that he had bruises on his underside. Important for spectating, the finishing stretch was lined with bars and restaurants, which were full of racers and fans after the amateur racing wrapped up before the big event began. When I arrived, Theresa Clif Ryan was a few laps away from winning the women's National Crit Championship Series race and the pro men were warming up for their 67 lap, 80km jaunt. 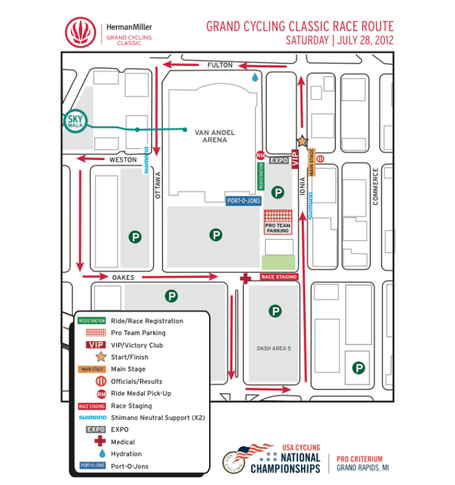 The weather was superb, a pleasant 82 degrees and sunny and stark contrast to the powerful storm that swept through the course last year with five laps to go, tossing barriers into the suddenly glassy streets and forcing the race to be called and re-started over half an hour later. With no such threats on the horizon this year, I settled into the shade at a bar and watched the race unfold. And with a Founders Centennial IPA - always a good choice, especially when it was brewed five blocks away - wetting my hands with condensation this is what I saw. 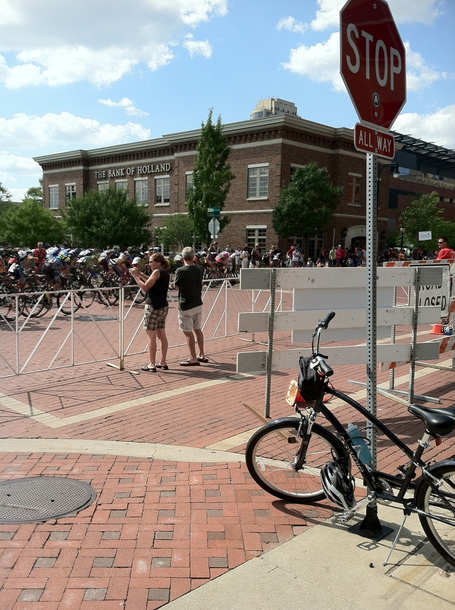 The sight here stayed the same for most of the race and only barely perceptible changes happened as the race progressed. For the first half of the race, little happened. Teams rotated through at the front, keeping the pace fast but not blistering. Everybody had a sprinter to work for, no entrepreneurial riders were given any gap to play with. But as time wore on, the effort that was at first hidden began to show. The peleton elongated, the cacophony of shifting gears under pressure that sounds like shots moved closer and closer to the exit of the corner as harder and harder accelerations were needed to hold the wheel at front. And when gaps became a real threat to those at the back, we left our sheltered perch and worked our way down the finishing stretch.

Last year's champion, Eric Young of Bissell, was left walking his bike to the neutral service pit with 15 laps to go, front wheel dangling dejectedly from his left hand. His team was lined up on the front, the reason at first not clear til a friend recognized Frank Pipp, as much the veteran as Young is the wet behind the ears prodigy, at the back of the line. Teams lined up near the front and jostling began in earnest with 10 laps to go. Young was back in the race, stealthily working his way towards the front end of the field. It was only on the last lap that anyone noticed he was back there.

With ten laps to go, Optum - Kelly Benefits was on the front. For only two of the final laps did Bissell wrest control away from Optum. 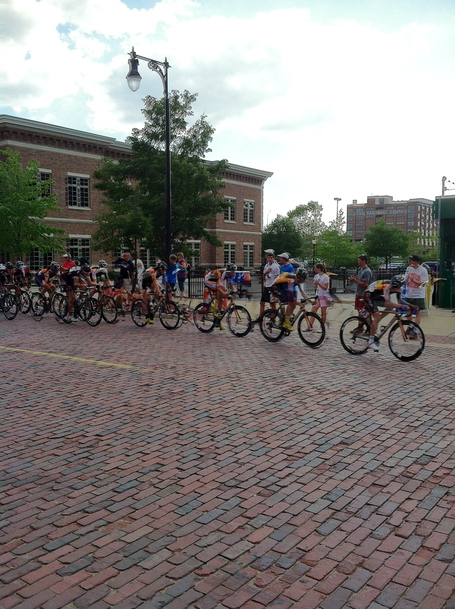 Two laps to go, one lap to go, the figures become a blur as the speed past. Optum still has control of the front of the field with five riders, nobody dares to - or can - challenge them. Bissell is directly behind, the only team with the strength to organize more than two or three riders, sprinter and leadout man, at the front. This scene, it is reminiscent of the HTC leadout trains of old. 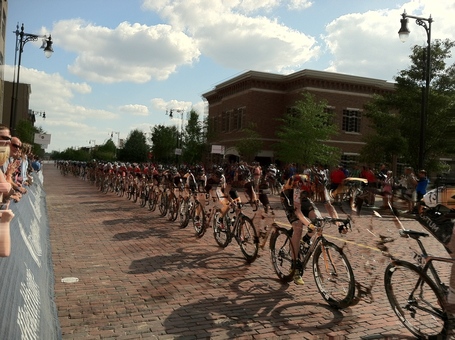 As the bell sounds for the final lap, we crane our heads to see as much of the course as we can without leaving our carefully selected vantage point. 150m from the final corner, 150m from the line, full view of the straight. The singular flow of riders approached and were through turn six before we could distinguish figures, the only colors we could see were orange, black, and red. Nervously we peered towards the final corner, crossing fingers and toes that no bike would skitter across the bricks like last year. Jelly Belly's Brad Huff opens up the sprint, but it is too early and Ken Hanson easily passes him as they tear past us.

As our heroes gathered for the podium, Hanson was interviewed. A former collegiate and elite national champion in the discipline, he still gives all of the credit to his teammates. Brad White, a leadout man who lost charge of his United Healthcare teammate Jake Keough on the final lap, was a bit confused about the podium step third was supposed to occupy. After some gentle reminding by a podium hostess, order was restored and celebrations began. Hanson first, followed by Huff, White, Young, and Pipp. 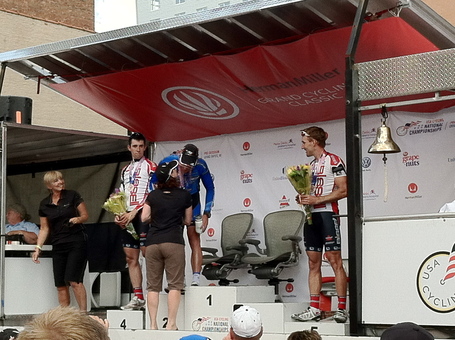 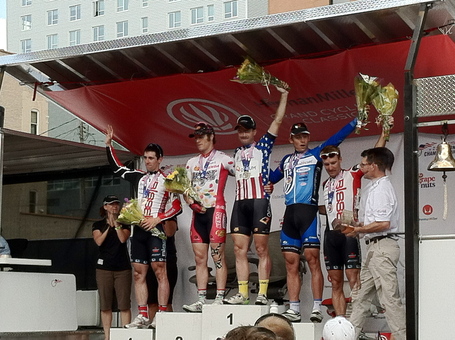 All photos courtesy of my shaky phone.