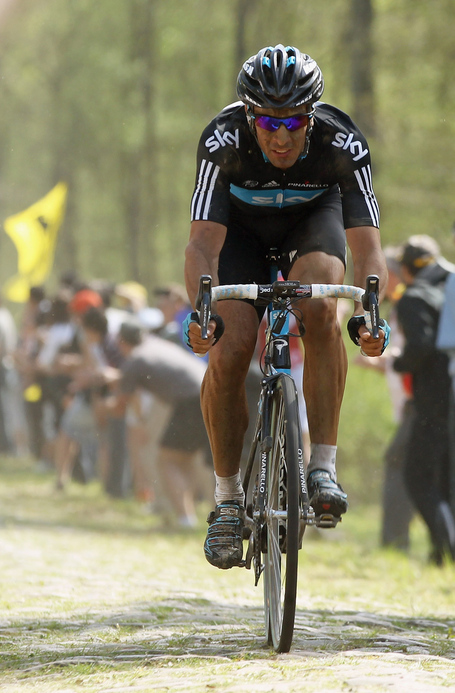 Spring is a long ways away - Omloop Het Nieuwsblad, the season opener for the classics, is over six months away! But the transfer market is starting to prompt discussion of exactly what the next season of cobbles and bergs will hold. On Monday, three transfers of solid classics riders were announced - Nick Nuyens to Garmin-Sharp, Juan Antonio Flecha to Vancansoleil, and Daniele Bennati to Saxo Bank - Tinkoff. For a round up of what these three interesting transfers might mean, follow along.

After years of promise and solid but not spectacular results, Nuyens surprised many by winning the 2011 Ronde van Vlaanderen, joining an attack by Fabian Cancellara and narrowly out-sprinting Sylvain Chavanel. The victory was a high water mark for his career, especially after winning Dwars Door Vlaanderen in the weeks prior. But then, Nuyens suffered a hip fracture at this year's Paris-Nice and missed the classics, robbing him of the races where he shines. Now, he is in the final stages of negotiations with Garmin-Sharp.

Nuyens is coming into a void filled by the prodigious talent Sep Vanmarcke, who is departing Garmin for a yet to be named team. Vanmarcke is the more talented rider, stronger now and only promising to gain resiliance and power over the following years and several grand tours. Nuyens, on the other hand, has less raw power to work with but instead relies on a canny ability to read situations very, very well indeed. In the 2011 Ronde, he barely made it over the Muur and the Bosberg in the lead group, struggling over the tops of the bergs at the back of the group, but knew exactly when to fire his sole bullet to chase after Cancellara after ignoring earlier forays off the front.

Garmin wants to be a team to be reckoned with in the classics but simply could not afford to retain Vanmarke on the roster with a large portion of its budget devoted to its stage racing talents and star sprinter Tyler Farrar. They similarly lost Thor Hushovd after the 2011 season, though Hushovd was not the happiest camper at Garmin. So where does Nuyens fit into all of this? He has experience and the ability to podium on the cheap. He still commands a sizeable salary - no former Ronde winner does not - but a poor season plagued by injury and little in the results department makes Nuyens a cheaper buy than last year. Had Vanmarcke stayed, Nuyens could have passed on some of his experience, but that much talent only congregates in teams with little focus on races past April. Instead, Nuyens will share leadership duties with 2011 Paris-Roubaix champion Johan Vansummeren.

Known affectionately as Juan Van Der Flecha by some fans, Flecha defies the stereotype of Spaniards as lithe climbers who detest the cold, rain, cobbles, and bergs of Flanders. Instead, Flecha relishes in the harsh conditions and seems at most times more Belgian than Spanish. Winner of the 2010 Omloop Het Nieuwsblad, Flecha also has three podium appearances at Paris-Roubaix to his name along with assorted podium placings at the Ronde van Vlaanderen, E3 Prijs, and Brabantse Pijl - truly a veteran of the cobbles and a perennial favourite.

So, why is he leaving Sky where he has had an unquestioned leadership role in the spring classics for the last three years? Support likely isn't the reason - Flecha has shared leadership with Edvald Boasson Hagen and, to a degree, Bernie Eisel while enjoying the strong service of Matthew Hayman, Jeremy Hunt, and Ian Stannard. While this lineup may not strike fear into the hearts of opponents like that of Omega Pharma - Quickstep, it has been more than sufficient to get Flecha to the business end of races protected, often with at least one teammate for company in the final 50 km of racing. In this year's Paris-Roubaix, Sky were the only team to have sufficient numbers to mount a chase of Tom Boonen in the final kilometers. While Flecha will be an unquestioned leader at Vacansoleil, filling the spot voided by two time former Ronde champion Stijn Devolder, his support will be less impressive.

Instead, Flecha's departure likely speaks more to the changing emphasis of Sky itself. It wants to be a grand tour team - Bradley Wiggins even hinted at an ambition for Sky to win all three grand tours one season - more than ever. While Flecha can be useful on the flatter stages and is a proficient stage hunter, winning Stage 13 of the 2010 Tour de France, he is costly even for Sky's large budget. With Flecha at Vacansoleil, Sky can afford more support for Bradley Wiggins and, perhaps more important, solid support for more than one proper tilt at a grand tour a season.

10 time grand tour stage winner in his sprinting prime, Daniele Bennati appears to be going the way of Stuart O'Grady, trading finishing speed for classics power as he ages. Though not a star classics rider or podium hopeful, he is an extremely strong domestique and can last until the final 50km of a race where team leaders need crucial support. Witness Bennati's solo attack off the front at Strade Bianche this year, going free at 38km to go with Daniel Oss for company before dispatching his companion on a steep climb shortly afterwards. Bennati built up a lead of 40 seconds and forced other teams to burn valuable riders chasing, eventually setting up his teammate Fabian Cancellara for a race-winning attack with 12 km to go.

Bennati may be headed to Saxo Bank because of his sprinting ability - he has yet to win this year but had five sprint victories last year as well as a second place finish at Ghent - Wevelgem. Certainly, Bennati offers a way for Saxo Bank to pad their small UCI points tallies (sans those of Alberto Contador) in the coming years. But one wonders if Bjarne Riis really has this in mind - he already has Juan Jose Haedo, who occasionally wins at smaller and mid-level races. Saxo is built largely around Alberto Contador and this is only likely to increase in the following year, so bringing on a sprinter for the grand tours makes little sense. Maybe Bjarne has an itch to start building up a classics team again? Rumors have circulated that Fabian Cancellara is not too happy at his current team, which are immediately followed by speculation that he will go back to his old manager Riis. If he were to do so, bringing Bennati would be prudent to ensure help in the spring.

Men's Transfer season: All the updates and summary