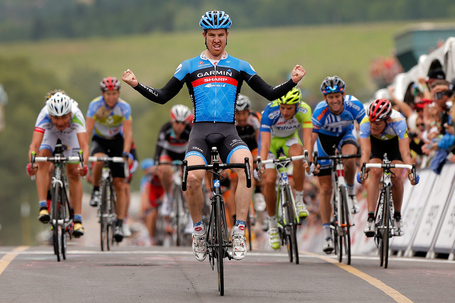 Today Garmin-Sharp sprinter Tyler Farrar broke his season-long non-victory duck. Shattered it, really. That picture above? Notice how the other guys don't look all that close to him? That's because they're... you know... not. Farrar was on good form today, staying in the winning peloton of some 60 guys, rather than sagging back to the chase group, where so many of the faster finishers ended up. Farrar climbed over three passes, including Lizard Head Pass, more than 10,000 above sea level.

Sound cRaZy? Not as crazy as this: the stage win is Farrar's first victory on home soil since 2005 when he was riding for HealthNet-Maxxis (and won the USPro Criterium). Now, granted, we probably don't know about whether he's won the odd crit here or there, but it's certainly the first big race he's won back in the States.

It may also be a sign that he's coming into a solid block of form, which raises the possibility of really putting this year behind Farrar. Not sure what's on his plan next, and targets like the World Championships probably don't suit him. But there are plenty of races, such as the Circuit Franco-Belge, which do. Oh, and he might be good for a spot on one of the Worlds TTT squads, given his place in the Garmin lineup. 2012 has most assuredly not been Farrar's year, but if it can end on a positive note, that could make all the difference in 2013.