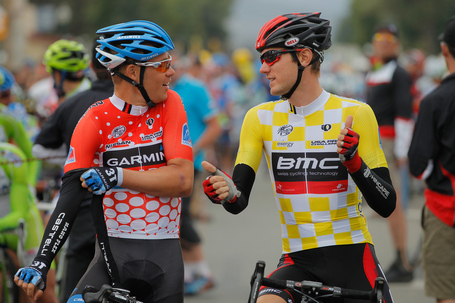 Today's victory by Garmin-Sharp's Tom Danielson sets up a nail-biter of a general classification battle at the good ol' USofA Pro Cycling Challenge.* Danielson's win was a classic mega-effort by a veteran whose dues were long since paid in full. Tejay van Garderen's yellow jersey defense was only slightly less admirable, maybe on par when you consider his age, or lack thereof. BMC and Garmin got locked into a great chess match, which has several rounds left, and a handful of other teams waiting to pounce on the next game. Christian Vande Velde snuck his way into yellow, which may be the best thing to happen to... everyone besides Garmin-Sharp.

* Can I just say, if people were critical of the name, I don't think it's because of the word "Cycling".

Ultimately the race may well be a dead heat all the way to Denver. There is potential for mischief tomorrow and Saturday, so we could see some real gaps open up on GC. Still, if today didn't sort things out, the short uphills at the end of stages 4 and 6 may or may not see much either. Which leaves Sunday's time trial. A quick Top Ten power poll is in order, and by order I mean how they'll finish at the end of the day Sunday.

Climbing Juice? Plenty. He was in yellow because he won the only uphill finish we've had so far. You sort of wonder when he's gonna run out of gas after his first Tour de France as well as a stop over at the Olympics, but his super power is recovery. No reason he can't pull this off.

Crono Power? I'm gonna say he's graduated to #2 in the American crono-pecking-order. Maybe Levi on a good year, one where he doesn't get hit by a car, retains the second spot and gives Zabriskie a run for his money. But right now, that's what Tejay's doing. And even Zabriskie's position is under threat. For more on how un-fluke-like TVG's crono-ness is, see the Tour de France's final ITT results, where Tejay put 38 seconds into Captain America.

Team Factor? What BMC lack in performance, they more than make up in star power. And age. Anyway, Tejay can count on at least some help every day, and Matti Frank looks terrific. Johan Tschopp was awesome last week. Cadel may have a day or two left in his legs. In other words, good enough. 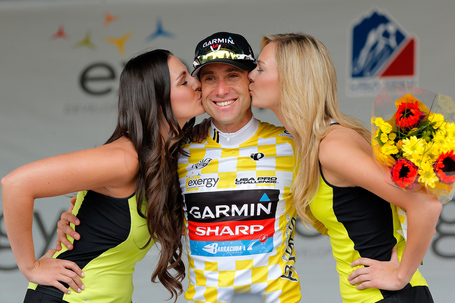 Climbing Juice? If the case for TVG going well uphill is based on stage 2, then I suppose you have to say the same for Vande Velde. But a week ago Vande Velde was coming undone in Utah, as Johan Tschopp took over the race lead for good. My hunch is that this week is a bigger target and Vande Velde will be better as the race goes on. He'll have to be.

Crono Power? He tied Leipheimer in the Vail ITT last year and generally gives his slightly older compatriot a run for his money against the watch. If everyone were on top form and the Denver ITT were the only stage, I wouldn't love VandeVelde's chances, but in context, he's got a good chance.

Team Factor? Off the charts. Garmin have two guys up the road on every stage, with Vande Velde getting an armchair ride among the favorites. Zabriskie's time loss early on, when he drove himself beyond where his digestive system was prepared to go, means he's free to get up the road and help. Meanwhile, Danielson and Stetina are both mere seconds out of the lead, so if they can shadow attacks, it will scare the crap out of everyone else. It's so much more fun to see a team that not only has a lot of cards, but plays them too.

Climbing Juice? Playing the Scarlet Pimpernel role, Levi is sitting quietly just eight seconds out of the lead, and not lifting a finger to change anything. Barely a week ago he stomped the field en route to Park City, and Levi used Utah last year to sharpen his form.

Crono Power? Frankly the entire subject is debatable -- on any given day Vande Velde can hang with Levi in a time trial. But Levi has done it more, and has closed the deal on one-week races against the watch. So until proven otherwise...

Team Factor? Bunch of lowlanders. And this is what kills it for me. Well, that and Levi's year of ... looking a little less than 2011. But assuming he's on form, the only way you put him ahead of Vande Velde is if teamwork counts for nothing. Eventually, perhaps in that Flagstaff climb at the end of stage 6, a/k/a the other place that could decide the overall, they will notice him.

Climbing Juice? Not a problem, per se, although he lacked the jump yesterday to stay in contact with the lead. But in a one-week race, you can expect him to hold his own.

Crono Power? Could surprise. He was tenth in the Olympic crono, albeit quite a ways back, but in a race that consisted mostly of crono-specialists.

Team Factor? Aru has been terrific. Kreuziger made the cut today. That's enough.

Climbing Juice? At this point he's in decent shape, though he's a decent bet to concede a bit of time Saturday.

Crono Power? Better than most. His two Tour de France ITTs saw him finish 10th and 19th. He crushed Levi and Danielson in the Tour de Suisse, a pretty good data point, just two months ago.

Team Factor? I suppose Horner is still a factor, but owing to his poor crono results all year, I say Chris works for Klodi in the end. Fuglsang and Busche put RNT level with Garmin for multitude of threats, though they've been far less anxious to play their cards than the Americans. Jens! Voigt is literally indefatigable. 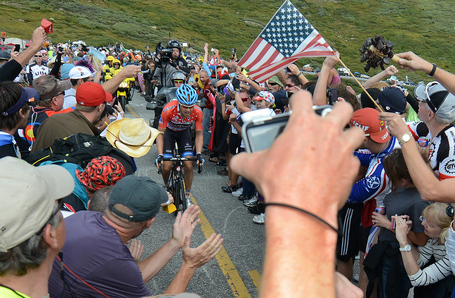 Climbing Juice? Much respect. Now do it again.

Crono Power? Very solid, but unfortunately he's up against a GC that consists almost entirely of strong cronomen. I put him here simply because he's emptied the tank more than anyone else, apart maybe from (and less literally than) Zabriskie.

Team Factor? Scroll back to the Vande Velde writeup if your memory fails.

Climbing Juice? Sure, although you have to wonder how a Dane survives at 10,000 feet. But survive he has. In general, he's been on a tear since June, winning the Tour of Austria and doing well in the Olympics.

Crono Power? National champion, yo! Of Denmark, but still, he's generally solid enough to make it into the conversation.

Team Factor? Loaded. Might even start using their power soon.

Climbing Juice? You don't win the US championships without some climbing legs. He's not as consistent as some of the bigger names, but he's generally solid, and can probably hang in the field, unless his team empties him in the pointless service of Damiano Caruso. Which they probably will.

Crono Power? Decent. There's a big dropoff among the contenders after Fuglsang. But at least he didn't contract the Italian Crono Disease from, say, Damiano Caruso, who has a raging case of it.

Team Factor? Since Duggan is leaving, you can count on de Gaas not using Caruso to create openings for Duggan. And since it's the US, Duggan isn't going to sneak away unnoticed either.

Climbing Juice? Seems OK. I don't really know him and his results don't present a clear picture, but Vlaanderen90 gets kind of excited when you mention Rovny, so I assume there's something to it.

Team Factor? Not a major factor. But he can follow wheels, at least to Boulder.

Climbing Juice? He's been a reliable teammate to van Garderen and looked sorta convincing on the attack yesterday, even if he didn't finish it.

Team Factor? It's BMC. But then, with TVG in top shape, Frank is the team factor. 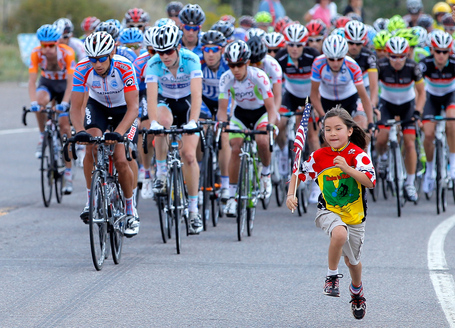