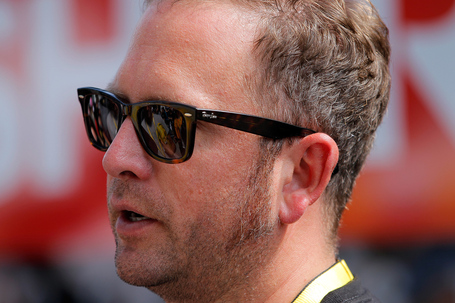 On August 11, the New York Times published an Op-Ed piece penned by Jonathan Vaughters in which he admitted to doping during his career as a professional cyclist. The revelation surprised few who follow the sport closely as it came after years of increasingly clear allusions by the manager of the Garmin-Sharp team who has now become an advocate for clean racing. The story was welcomed by many but was idealistic, dealing with the emotions involved in the decision to dope, to stop, and to retire from the sport in succession, rather than the details many craved. The highlight was on taking away the choices Vaughters was presented with, not the particulars of his past.

In a wide-ranging interview with Bicycling Magazine's Joe Lindsey, Vaughters delved into more of the details of his decision to dope - when it first happened, methods, avoiding detection, and ultimately why he stopped. What follows is not a summary, for I highly recommend reading the story, the full transcript, or both on your own. Instead, this is a focus on two of the biggest points in the article - one concerning Vaughters' trajectory through professional cycling, the second the myth that universal doping levels the playing field.

Just That One Time?

One of the first myths Vaughters shattered was that his doping was limited to his time at US Postal, surprising many. Vaughters has long hinted that he doped during his term at US Postal. He won the Stage 3 time trial up Mount Ventoux in the 1999 Critérium du Dauphiné Libéré, setting a record time for the ascent to the summit. Rather than expressing pride or joy, however, Vaughters has often merely said he was not proud of finishing second in the Dauphiné that year and that his performance there "answered a lot of questions." The way Vaughters framed it, the Dauphiné was a one-off, a blip on his timeline rather than the culmination of years of decisions.

The ambiguity about whether Vaughters doped at US Postal has not been cleared, most likely because Vaughters does not want to reveal anything that will appear as evidence in the US Anti-Doping Administration (USADA) case against Lance Armstrong in the coming weeks. However, if we draw a trajectory of Vaughter's career, it seems as if he is the anonymous second teammate who confessed to doping at US Postal alongside Frankie Andreau in 2006 to the New York Times.

Vaughters began his European career with the new Division 1 - equivalent to a Pro Team in today's ranking system - Porcelana Santa Clara team based out of Spain. The team's manager, a member of the Jesuit order, forbade doping even though it was openly discussed, even boasted of, within the peloton. Though the team was stacked with talent and took a much more scientific, marginal gains approach to training, diet, etc. than its competitors, its riders consistently struggled. Finally, the team's manager approached Vaughters with a proposition: they would ensure his red blood count stayed at the level it was at the beginning of the season, for health reasons, by using "medication." Though he knew the proposition was to dope using EPO, an idea that revolted Vaughters if discussed openly, he acquiesced. It was 1996 in the months leading into the Vuelta.

After a year riding for Comptel - Colorado Cyclist in 1997, Vaughters moved to US Postal for the 1998-1999 seasons. In his second year at US Postal, Vaughters had his now infamous Critérium du Dauphiné Libéré performance. A year later, he moved to Crédit Agricole and the results tapered off under Roger Legeay's management.

The taper is likely due to a change in behavior on Vaughters' part. Legeay would not tolerate any doping on his team and offered to pay Vaughters as if he had won the Tour de France if he merely placed inside the top 10. However, the pressure to get results to maintain the team's position as a Division 1 team, largely self-imposed, eventually led Vaughters to begin doping on his own in his preparation for the 2002 Tour de France. He made it to the Tour, but only after abandoning his doping regimen in his preparation. He abandoned the Tour after a crash and came home to race in the United States for half a season in 2003.

The way that Vaughters has talked about the 1999 Dauphiné makes it seem different from prior races in the way he prepared for it. To many, it seemed it was the only race he had doped in preparation for. But now, knowing that Vaughters had first used EPO three years prior, the question of what made that particular race so different is less clear. Perhaps this will be answered after USADA finishes its arbitration hearings in the Lance Armstrong case, perhaps not. One thing is certain - some parts of the interview have prompted more questions at the same time others were answered.

A second myth the Vaughters interview deals with is that legalizing doping would even the playing field. An argument used by some upset or jaded with the seeming inability of anti-doping measures to deter riders from turning to illicit means, the response "just legalize it" is none too uncommon.

Many are skeptical of this approach, likening the effects to an arms race where the winner is determined by he who is most willing to risk his health or even life, not the strongest and most savvy rider. Vaughters agrees. But, there is another side to this scenario that is less evident on the surface.

In the EPO era, one of the first tests for the drug consisted not of testing for its presence but establishing a maximum allowable limit for a rider's hematocrit, or the volume percentage of red blood cells in an individual's blood. If a rider's hematocrit exceeded 50, the result was a positive test and suspension. Before a test for EPO itself was developed, the result was a finely tuned game of chicken where riders attempted to bring their hematocrit to 47-49, just under the allowable limit, and maintain it.

This may sound like a level playing field, but it is far from it. Individuals' natural hematocrit values vary greatly - some, like Vaughters, have a naturally high hematocrit (i.e. in the 40s) and others have baseline values much lower (in the 30s). Assuming similar VoMax and other physiological characteristics, this can be taken as an indication of how efficient a rider's body is at transporting oxygen and extracting it from red blood cells; a lower hematocrit value is counteracted by an increase in efficiency within the body.

If two riders, one with a naturally low hematocrit and one with a naturally high baseline, both raise their hematocrit to 50, one receives a much higher percent boost than the other and thus a much larger improvement in performance. Even if anti-doping regulations did not specify maximum allowable hematocrit values, there is likely a maximum level riders would be willing to hit for fear of negative effects on their health.

Simply put, there is no such thing as doping equally. While Vaughters' discussion was limited to EPO (and can be extended to blood transfusions), it highlights a basic fact: there is no standard response to any performance enhancing substance, be it testosterone, human growth hormone, cortisone, or any other product. There is no level playing field aside from a clean sport. This, Vaughters says, is one of the logical - not ideological - arguments that makes him so staunchly anti-doping. Though it is impossible to make a world where doping is completely eradicated, it is his hope that we can achieve a world where the gains from doping are so small that it does not give an unfair advantage to those physiologically responsive to it, that it does not change the results of most races.