This is all you need to know about today's stage. 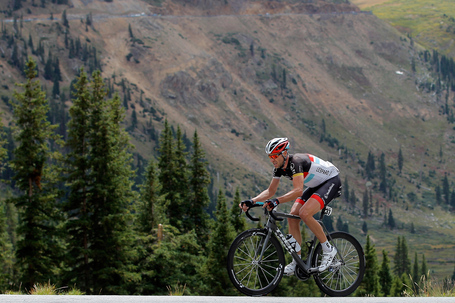 I'm not that into Jens! hyperbole, but I shit you not, the pack was getting rained on and Jens wasn't. And he had a four-minute lead. On the same course. So he's a microclimate, among other things.

If you could zoom in you would see this: 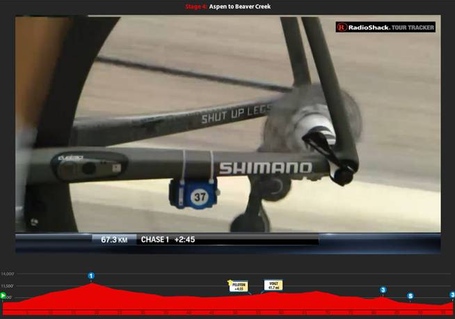 Also, being solo in the mountains is dangerous, but not for Jens. At one point a lynx pounced on him, but he ate it. With his legs.

Tejay Van Garderen of BMC got a measure of satisfaction today by outkicking Christian VandeVelde at the line, putting him back in the yellow jersey. Not sure why he wants it just yet, but he does, and BMC do, and their arch-nemeses Radio Shack be damned! Of course, the Shack got 1-2 on the stage, when Andreas Kloden fired up his deadly sprint to the line for the first spot after Voigt, so nobody will be questioning their gender today. [If anyone ever compares me to the women's pro peloton, I will thank them in no uncertain terms.] Kloden, at +0.17, continues to look like a threat to win. Today's punchy finish wasn't as punchy as Saturday's will be, but there's little reason to doubt Klodi's fitness for that stage. Which means Sunday's time trial will be awesome... which we already knew.

Oh, and tie-breakers... I think I understand them now. To wit: