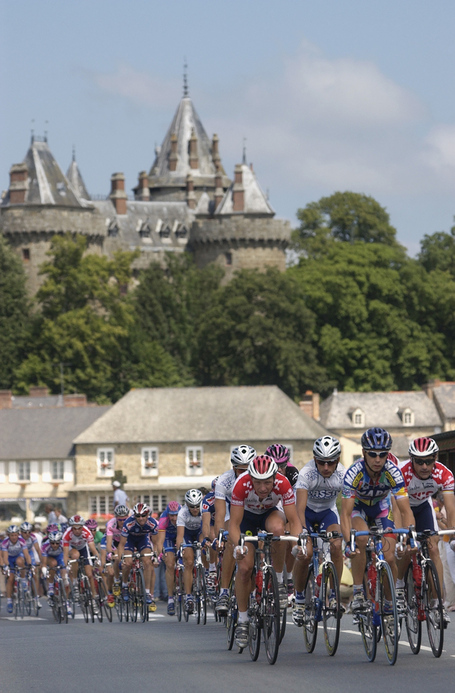 I don't have time for a proper post here, but let me at least get the conversation started.

What: GP Ouest France, not to be confused with the GP Plouay, which is the women's race. Monty wrote that one up before it was buried under the AvaLance of news. Great race. But for now I'm talking dudes.

Actually Plouay hosts a full four days of events. There's a BMX race (happened yesterday), a journalists' race (earlier today, surely you caught that one live, right?), and the women's World Cup event tomorrow followed by the men Sunday. Quite the cycling celebration, in a place that loves cycling more than most.

Where: Plouay is in Brittany, where the ancient French love of cycling has never faded (I'm told). Not sure what the poll numbers say, but regardless, the roads of the Morbihan district have seen a few Tours de France pass by and hosted the 2000 World Championships.

And that's what this parcours is, a world championship race. More than any other classic the GP Ouest France and its rolling terrain favor everyone and nobody in particular, just as you hope a world championship course will. It even features a circuit race format, which is usually a bad thing, unless the circuit is long and interesting enough so you won't confuse it with a crit. This one is 27km and rather delightful. The main course is the Cote de Ty-Marrec, featured pretty late in the circuit, enough to jog the tactics in the final passing if they haven't gone to hell already. It's 1.4km at just over 5%, though, so it won't eliminate everyone...

Who: ...like Peter Sagan. The President of Fastvakia is back in action after a couple weeks off following the Olympics. Since he is rumored to be human and since he's gone two races without winning, it's plausible that he isn't in top form, and won't be until the World Championships, which he will eat for breakfast. So Sagan is hardly a sure thing Sunday.

The defending champion, Grega Bole, is a good example of who wins here: guys who can sprint without being eliminated at the mere mention of a hill. Matt Goss is another former winner, if that helps, but so is Thomas Voeckler, and Simon Gerrans, and Vincenzo Nibali, for those years when the race gets broken to bits. Edvald Boasson Hagen is another pretty good bet here, though for once Sky won't be drilling the peloton into submission, so Eddy will have to take matters into his own hands. There are tons of young guys going for the experience, like Jetse Bol and his former teammate Ramon Sinkeldam. Surprises can't be dismissed. But there's yet another group, the classics dudes, like Nick Nuyens, Greg Van Avermaet, Sep Vanmarcke, Heinrich Haussler, and the entire Vacansoleil armada. Don't sleep on Arnaud Demare. Or Rui Costa... love that guy. Full startlist here.