Share All sharing options for: Five Cool Things About the USA Pro Challenge 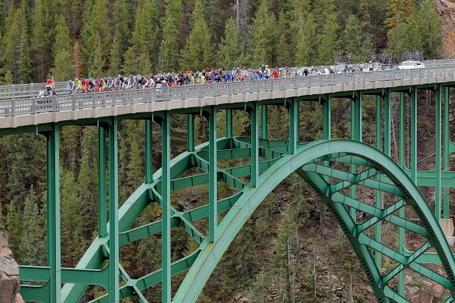 The USA Pro Challenge riders cross a bridge on the road from Aspen to Beaver Creek. Jens Voigt won the stage after a long solo escape. Photo: Doug Pensinger/Getty.

Christian Vande Velde of Garmin-Sharp won the overall at the USA Pro Challenge at the final day's time trial in Denver. Tejay van Garderen of BMC Racing Team, who wore the leader's jersey for several days, finished second, while Levi Leipheimer of Omega Pharma-Quick-Step was third. Up-and-coming star Taylor Phinney of BMC Racing Team won the stage. But you knew all that right?

The crowds were crazy, the mountains steep, and the air thin. If we were going to sum up the USA Pro Challenge in one sentence, that might just about do it. But really, a seven-day stage race is too big for such a small summary. So, I have reached deep into my bag of words, which I confess is getting perilously close to empty, and I bring you Five Cool Things About the USA Pro Challenge.

The course in Colorado was by all accounts ridiculously difficult, almost too much so. The course climbed up and over the 12,000 foot Independence Pass twice. That’s some thin air, right there. Over on Twitter, Ben Jacques-Maynes, breakaway dude extraordinaire grimaced at the notion of a rivalry among the U.S. stage races over making the hardest courses possible. In his view, the Amgen Tour of California, Larry H. Miller Tour of Utah, and USA Pro Challenge are plenty difficult.

In Colorado, the stage finishes kept it zesty. In Crested Butte, Tejay van Garderen attacked the short, uphill finish. Van Garderen won the stage and took over the race lead, which he held until Boulder’s Flagstaff climb. It was the kind of finish that May’s Amgen Tour of California missed. There, the hardest climbs came a long way from the mostly flat finishes. Short, punchy, climbs — they give good bike racing.

At the Amgen Tour of California, Garmin-Sharp tried to make the race hard. They rode on the front, they turned the screws on the climbs, but the win eluded them. At this Colorado race, the team changed it up. The USA Pro Challenge is arguably one of the most important races for the U.S.-based team. The team started out as a junior team in Boulder, and several riders on the team’s roster call Colorado home. Ask any U.S. rider, and they all like racing these U.S. stage races. Because it’s home. And they can race in front of their families and fans.

And at Colorado, Garmin-Sharp raced it up. Raise your hand if you expected to see Garmin riders in the break on the opening stage? You did? Well, you’re way smarter than me. Zabriskie rode two straight days in the break, puking his brains out on the first day. The team’s reward was a solo victory for Tom Danielson. The aggressive tactic also spared the team the job of riding tempo on the front, a job that BMC had to shoulder. Every day, a horde of dudes went up the road - really, when it’s twenty riders, the word breakaway just feels inadequate - and Garmin-Sharp had riders join the move each day.

The result of the hard week’s riding for Garmin-Sharp? Three stage wins, including two for Tyler Farrar, who has raced winless this year, and most aggressive and a stage victory for Danielson, and the overall victory for Vande Velde. That will make the sponsors smile.

Taylor Phinney won the final time trial in Denver ahead of Levi Leipheimer and Christian Vande Velde. It was not totally a surprise. After all, Phinney finished fourth in London in both the time trial and the road race. At the same time, Phinney’s transition to the pro ranks has moved slowly as he has worked through injuries and crashes at inopportune moments. By now, though, things are plainly coming together for Phinney. He won the prologue at the Giro, and he won in Denver. Next call, the classics.

Phinney, Tejay van Garderen, Joe Dombrowski — the Colorado race showed that the kids are coming up fast and looking good doing it. Van Garderen won a stage and held the race lead until Leipheimer stripped him of the jersey on the climb to Flagstaff in Boulder. In Denver, van Garderen finished third on the stage to take second overall. Van Garderen is all the time inching closer to the win he wants to badly. This week’s stage victory was the first road stage win of his career, which seems weird when he’s already finished fifth in the Tour de France. But for stage racers, time moves a little more slowly, and the bigs wins just take a little bit longer to come around.

Dombrowski, meanwhile continued to live up to the hype in the high mountains, and won the best young rider’s jersey. Watching Astana’s young climber Fabio Aru and Dombrowski revisit their Giro rivalry in Colorado’s mountains was good times. Next question? Which pro tour team has signed the young climber?

The Olds Aren’t Done Yet

Early on at the USA Pro Challenge, Jens Voigt announced that he had signed a contract to race yet another year with Radio Shack-Nissan-Trek. Voigt will be forty-one years old next year. When I talked to him a couple weeks ago at the Larry H. Miller Tour of Utah, Voigt joked that he was getting too old for this bike racing game, and that his shut-up legs mantra wasn’t working especially well. Well, it worked well enough in Colorado.

The day after BMC sports director Mike Sayers slammed Radio Shack-Nissan for passive racing — in an unfortunate turn of phrase, Sayers told them that they belonged in the women’s race — Voigt let his legs do some talking of their own. Voigt attacked early in the stage, and rode solo all the way to the finish in Beaver Creek to take the stage victory. Too old, what?

And while the kids put up a solid challenge for overall victory at the USA Pro, the prize went to veteran Christian Vande Velde. Scroll through Vande Velde’s results and the race wins are few and far between. He has spent much of his career riding in support of others. He did a massive ride for Ryder Hesjedal on the Passo dello Stelvio, for example. Nice guys, they don't always finish last. Leipheimer finished third, the two veterans providing the bookends around up-and-coming talent van Garderen.

There’s always been a bit of a rivalry in the United States within cycling. There’s Colorado and there’s not-Colorado. Boulder is the headquarters of VeloNews, and Colorado Springs hosts USA Cycling. Colorado, they think they’re pretty cool when it comes to bike racing. And certainly, the crowds turned out for the USA Pro Challenge. From the looks of it, the Boulder finish was mayhem, and several of the other stage finishes looked almost as nuts. The crowds are a good sign for the future. If people turn out to watch the bike race, maybe we can have nice things.

The race did struggle on the video front. I suspect that has something to do with the remote areas that the course included. There’s not much going on at 12,000 feet in the normal way of things. Sorting out the video would be an important next step to growing the race.

There’ve also been reports of non-payment by the event sponsor Exergy. That does not bode well for the the future, when Exergy has funding commitments spread throughout cycling in the United States. But hey! I’m feeling optimistic today! With all those crazy people out watching the race, surely there are sponsors just dying to throw down to support it, right?