Today In I Love Everything... It's the ENECO Tour!

Share All sharing options for: Today In I Love Everything... It's the ENECO Tour! 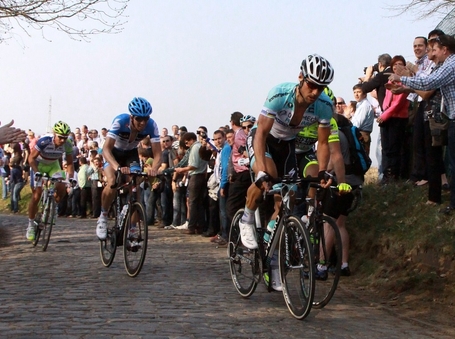 Yesterday, caught up in the fervor of the Olympics, I learned to love track. Sure, it will always be The Sport That Stole Geraint Thomas, but British people surely love track, and I like our former landlords well enough. So OK, track.

Well, apart from Frinking-gate (shudders) I've had nothing but positive experiences with the Dutch, so it's time once again to give the ENECO Tour a fair shot. This year's edition occurs well into the cycle of Everyone is Jonesing For UCI Points -- teams, riders whose contract is up, and so on. The race gets to matter on this score alone.

And give the Dutch credit for keeping their focus on what matters. The former Tour of the Netherlands could be one giant suck-fest if they'd stood fast to their original home-country Tour. But no, they changed the name at the behest of a big, stable sponsor (check), they made it a BeNeLux event, which brought up the subject of hills besides those of Greater Maastricht (check), and they generally find things to get interested about. No exception this year.

Every year there's a general romp around Belgium and the Netherlands, grazing the edges of Liege-Bastogne-Liege, Fleche Wallonne, de Ronde and Amstel Gold, but being careful not to grab hold of them, for fear of staging a pale imitation of the spring classics. Most days end in a sprint, but somewhere along the way there's a wrinkle that determines the general classification. Usually it's an under-20km time trial. Maybe it's a real climb. This year, for the first time in the UCI era, it's a team time trial.

But before we get there, can we give a shout-out to some awesome stages?

On Sunday the ENECO Tour doesn't so much as pay tribute to the Tour of Flanders as mock the organizers who set out to kill de Ronde last year, as the race will finish in Geraardsbergen. Yes, Geraardsbergen. Via the Leberg, Langendries, Valkenberg, Tenbosse and Eikenmolen. With not one, not two, but three passages of the Muur, including the finish on the Old Muur (think of the wide cobbles before they turn up to the Kappelmuur), sort of a tribute to the various layers of cycling history in the town. If you hated the omission of the Muur from the Tour of Flanders, Sunday is your day to watch, scream for Tommeke or one of the other classics dudes on hand, and vent your frustration and love at the same time. Sunday is the day the ENECO Tour becomes a big deal in Belgium. And I don't blame the Dutch organizers one bit for this plan. It's a masterstroke.

The question remaining is, who does all this favor? Taylor Phinney, that's who. It doesn't appear that there are time bonuses for sprint wins, but BMC maneuvered Phinney into third today, so if they win the TTT tomorrow, he will take over the GC lead. From there he can sit back, while stage threats like Adam Blythe, Greg Van Avermaet, and Phillippe Gilbert take their chances. He can follow the lead of classics vets like Alessandro Ballan, Marcus Burghardt and Manuel Quinziato shepherd him around. He'll get the same time almost every day, smack down his rivals in Saturday's ITT, and coast home Sunday behind the epic battle on the Muur.

Not that it will be easy. Garmin-Sharp and Omega Pharma Quick Step figure to give BMC a run for their money tomorrow. Overall Garmin's squad is on par with BMC's: Vanmarcke, Millar, Haussler, Navardauskas, Rosseler, Klier and Kreder being the main men. That's powerful. But Haussler lost to Phinney today and Garmin don't really have a cronoman on Phinney's level. Sorry David. Same goes for OPQS, who are bringing their A-list from early April: Boonen, Chavanel, Steegmans, Terpstra, and so on. Great team for Sunday. No time trial aces on hand. That stage probably means more to them than the GC anyway, so no problems there.

Another team to not sleep on is Vacansoleil. Thomas De Gendt, Gustav Larsson and Lieuwe Westra are all strong against the watch, meaning they'll have a good day tomorrow (you'd think) and have a few guys high up on GC after Saturday.

A few other individuals to watch:

If you don't love the ENECO Tour yet... well, you may never, but Sunday will be your best chance. This is going to be great fun.