Vanmarcke: I Haven't Signed With Garmin (Yet)

Share All sharing options for: Vanmarcke: I Haven't Signed With Garmin (Yet) 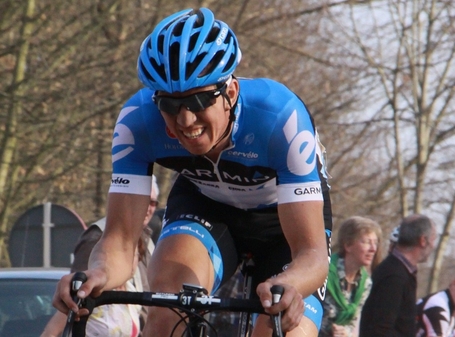 Sep Vanmarcke told the Gazet van Antwerpen (via Sporza) today that he has not signed a contract for next year, fueling speculation that he may not extend with Garmin-Sharp. I don't want to say much about contract stuff, since there is almost no reliable information readily available. I had thought he planned on staying with Garmin. But Vanmarcke is in a pickle: he has no grand tours in his legs this year, and is a reserve for the Vuelta -- which he finished last year, 140th overall, in his grand tour debut. He has something like 30 race days total for 2012, according to CQ. Meaning, Garmin aren't investing race starts in him to build toward 2013, and they're starving him of UCI points which he'd need to become an attractive transfer target.

Or maybe not. We all know Vanmarcke served notice of future classics success with his win in the Omloop Het Nieuwsblad. Rabobank are mentioned by Sporza as keen for his services, and Lotto-Belisol's Marc Sergeant said the same of him in April, albeit with the caveat that he figured Sep wanted to stay away from Belgian teams. Anyway, someone will sign him, probably for a goodly sum.

The question is, who? Garmin-Sharp have to be where he looks first, but having him as a reserve for the Vuelta suggests they are either not planning to keep him or worried about him not wanting to stay. I'll take a wild guess and say that cost might be the issue. And in fairness to Garmin, they should be thinking twice. Sep is awesome, but he can't climb much, by his own admission. So it's hard for a team like Garmin, which invests heavily in the GC for the grand tours, to justify sending him to the Tour de France, or the Giro. The Vuelta, OK, and maybe they come to agreement before long and that last Vuelta spot opens up. But Garmin don't have unlimited funds and don't have an unusually large number of grand tour start slots such that they can be giving them out to a classics guy.

By contrast, the Belgian teams most certainly do have plenty of grand tour start slots for their classics guys. Their differing priorities mean that they absolutely can and should spend those Tour spots on a guy who won't get a single result, save for the odd first-week cobblefest. For Lotto, say, to buy up Sep and send him to the Tour as a way to harden his form for the next spring makes perfect sense, and justifies a big salary. If it comes down to the money, Sep will have to choose between the cash and his explicit desire to keep some distance from Belgium. Rabobank is a happy medium, but I can think of a few other teams that might fit the bill. Saxo-Tinkoff? Orica-GreenEdge? Maybe even Katusha or Astana?

I liked him at Garmin, he seemed happy and it's a proven environment for young riders, but I wonder what it takes to build a classics team if you're an American outfit without unlimited funds. My guess is that what Vaughters can succeed with is a classics guy who does other valuable things well -- like Boasson Hagen, who sprints and justifies his Tour presence, or like Sagan, who is a killer in several disciplines. But those guys don't grow on trees. Garmin have one in Van Summeren, a great grand tour workhorse and a model for what Vanmarcke can do someday in July, when he's built up more. Plan B is an older classics vet who is fine with a limited role built around spring and not much else, and is paid accordingly. There again, it's hard to buy those guys away from the Quick Steps and whatnot, but unpolished gems can be found (Nick Nuyens) here and there.

Oh, and the Tour of Flanders starts in 236 days. Just saying.