This year's European Champs take place over the next four days in the Netherlands province of Zeeland. 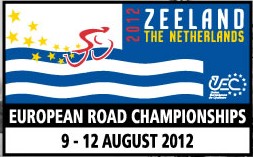 So named because it is very close to the sea. But land. And being Dutch it is also very very flat. So what better way to spend an August weekend than with lots of sand, sea, sun, and echelons. OK the sun might be a bit tough on all those British riders going dizzy and pasty under the artificial lights of the velodrome, but British Cycling came up with a great solution to that one: Don't go.

Road Championships mean two sorts of races: Time-trials and Road Races. These get two days apiece. At 10am Thursday morning, just outside Borsele (home of the famed Omloop), the boys set off on a 24.9km course, then at 3pm the U23 women follow that same course. You can download a pdf of the route if you want to try and trace it yourself on Google Earth, but why not sit back and enjoy the vodeo that the organisers have put together. The music might be a bit old hat, but it's early days yet.

Then on Friday morning the girls start at 10 am with a shortened version of the course of just 14.8km, followed at 3pm by the U23 men on the original 24.9km path.

Then on to Saturday and Sunday for the real meat of the Championships, the Road Race. The course is a 20km circuit running from Goes to Wemeldinge, with a long curving section following right beside the coast. Get a pdf map here, or just sit back and enjoy the video. And because this is the European Championships, celebrate that it is accompanied by some of the cheesiest, Europeanest music you're ever likely to hear. The only thing missing is some random scary mascot popping up to tell you "Remember, kids. Stick to the middle of the road!"

Saturdays programme is 129km (6 and a bit laps) for the boys at 9am then the same again for the U23 women at 2pm. Sunday sees the girls race 80km or 4 laps at 10am, followed by the U23 men's race of 172 km (8 laps - yes I know the maths doesn't work out. Aren't we lucky that Newton wasn't Dutch) at 1pm. There's a programme available with all the maps together, but it's just not the same without the music.

The latest news is that there are a total of 730 participants entered for the weekend, coming from 34 countries. You can download pdfs of the entries here, and leave any comments you have below. None of us (well apart from Vlaanderen) is an expert on these people, so any tips on who to watch for are very welcome. And note that a win here automatically gives you entry to the Worlds. Both personal, and as an additional rider for your nation. So there aren't any excuses for not sending a team.