As per usual the time trial at the Tour Of Utah took place at Miller Motorsports Park to the west of Salt Lake City in the town of Tooele. The unusual part was that it was on Wednesday and was a Team Time Trail, on many accounts the first in North America since a similar Team Time Trial at the raceway during the 2008 Tour Of Georgia ( Which by the way rumor has it that the most recent Gov and LT Gov of the state are floating ideas of reinstating.) Also in a change from the last couple of years was the fact that a 12:15 start instead of the late afternoon norm.

Wednesday turned out to be another very hot and dry day for the riders with concerns about air quality as local wild fires have the air in the area smelling like camp fires everywhere and an air quality index of 150..over 100 is considered unhealthy. For the day I spent the entire race on the back side of the race in what turned out to be quite the interesting position. Miller Motorsports Park is a typical road course with many twists and turns but very little elevation change except a small rise on the back side that I posted myself on the back side of. It became interesting when it started to be apparent that the combination of decent crossing winds and the rise had some riders blowing up and teams trying to get back together. 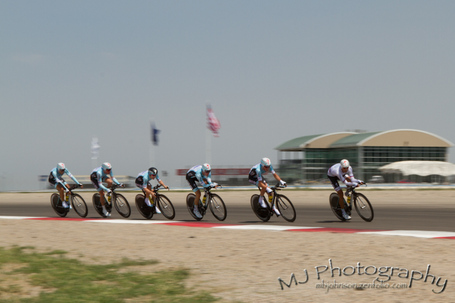 The Team with the worst issues was of course Levi's Omega Pharma Quickstep group of only six riders. With only six riders the margin was already very thin for them and the dropping of Chicchi in the first lap. That left them with only the required five guys needed to stop the clock and one of those five was Stagiare Jeroen Hoorne who struggled to keep the pace. The team communication as they went by was quite boisterous and not completely complementary. Had to really feel for them as they struggled to hold it together until the end.

In early running Rabobank was very impressive with great discipline and technique. They slowly burned their matches and came by in the last lap with the required five driving hard. 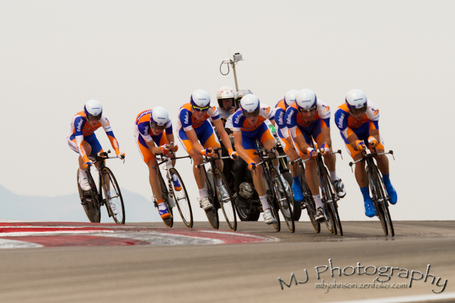 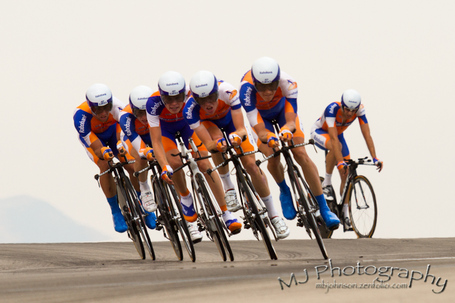 This took them to the early lead and they held on to it for most of the day until the Garmin Sharp Barracuda squad came by and just blasted the course to take it by over 30s. 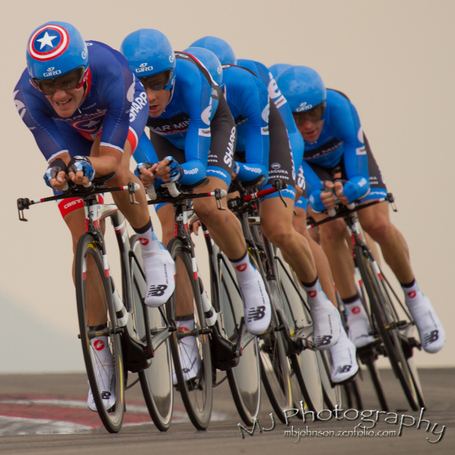 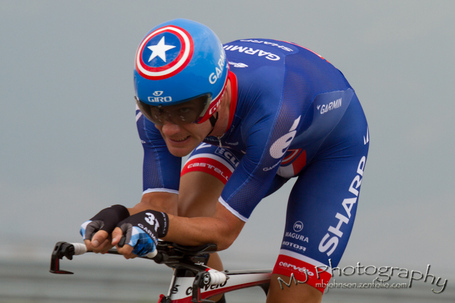 I was very impressed by the Bontrager Livestrong squad as well. Many of these U23 riders have NEVER ridden in a Team Time Trial. I am convinced that had they used the technique to burn a few riders early they might have even done better as they finished mostly intact. 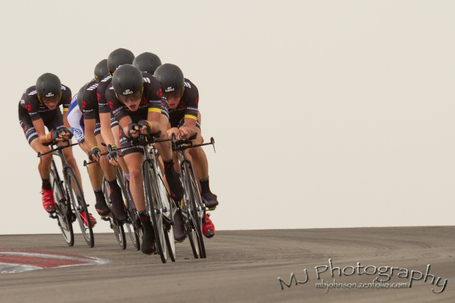 Overall it was another great day and I can now say that after seeing 9 major stage races in the US I have finally seen a Team Time Trial. Personally I would love to see them keep it in the race every year and just move it to different locations other than the MMP, while it is a great venue it has been used over and over and they could use a change I think to expose others to the TTT. By having it midweek and middle of the day the number of spectators was visibly down from the usual Friday late afternoon crowd.

For more pictures feel free to look at the gallery Here