FSA-DS: Under the Red Kite!

Share All sharing options for: FSA-DS: Under the Red Kite! 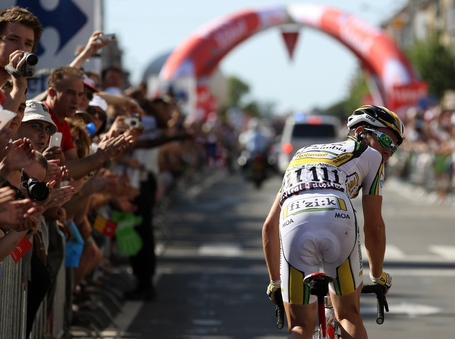 Anyone coming up on me?

With all the grand tours in the books, we have a pretty good idea of how the final battle for Ultimate FSA-DS Supremacy is shaping up. Here are the top eight on the current standings, men's side (I'll get to the women's comp later), with eight being the cutoff of teams that are roughly within 1000 points of the lead:

Ninth-placed Hägerlinge is about 1300 points back, so this seems like a logical and manageable cutoff. A thousand points is a large number for some of us. Me, for example, a thousand points is more than one-eighth of my season's total. Or put another way, it represents more than the shortfalls experienced this season by Denis Menchov and Michele Scarponi added together. So yeah, some of us think that's a pretty big number.

But to the teams on this list, it's all in a day's work. So if L-Mick has to get moving in a hurry, well, s/he's been doing all year already.

Before looking at the teams in contention, let's talk about what's left to win. There are a full four cat-2 mega-classics: the three world championship races and Il Lombardia. How much you want to take from that is an open question, since the winners' circles of those four events might not overlap much. But there's a spate of climbers' races around Lombardia -- Emilia, Coppa Sabatini, Giro del Piemonte -- where riders have occasionally run the table. The sprinters (and maybe classics guys) have Paris-Tours and the Circuit Franco-Belge. And the World Championships RR is hard to peg as ruling out any of the above. If your guy might be getting the hot hand right now (I'm looking at you, Gerro and Gilbert), then a big finish is worth contemplating at least.

What's left: Hm, tougher one here. Boonen is a plausible Worlds protagonist and presumably Paris-Tours too. Lots of Gar-Men for the team time trial. After that... aren't guys like Tejay and Wiggo and Purito winding things down? With 350 points in hand over bvl, they may hang on, but I bet that lead shrinks.

How they got there: Wiggo, Sagan, Boonen, Rui Costa, Henao and just a TON of steady contributions.

What's left: Rui Costa has hopes still. Martin is a favorite for another ITT world title. If he and Sagan get the two golds in Valkenberg, the WaterBoys will be in trouble.

How they got there: J-Rod, Wiggo, Boonen, Valverde and Greipel. Henao seems to be a common thread. Nice pick on Nordhaug, though having a Norwegian DS helps there.

What's left: With Farrar injured, it's not clear. Greipel is the biggest name on there that would help the Rouxs close in on the WaterBoys, but Wafelijzer has him too. Methinks Holdenmate might be boxed into second or third.

How they got there: Wiggo, Sagan and Boonen. Mini Phinney, Thibaut Pinot and Luke Durbridge were minor coups.

What's left: Sagan, of course. Needs Phinney to beat Martin for the Worlds ITT if s/he's to close in on Wafelijzer too.

5. Haence Armstrong... trent lowe (at the back of the peloton), DS PrinceBuster

How they got there: J-Rod, Sagan, Boonen and Valverde. [I'm not mentioning Greipel much since he just barely exceeded last year's total, though obviously he didn't hurt.] Henao, Demare and Moreno Moser were astute pickups too.

What's left: Just upset specials. Menchov? Breschel? This is probably a good place to point out how everyone at the top of this list picked Boonen. Doesn't help them separate from each other, but Tommeke's big comeback certainly killed all the teams who don't have him.

How they got there: J-Rod, Sagan, Boonen, Rogers, Moser. Renshaw shows up on a couple of these teams, some nice cheap points there.

How they got there: At the risk of sounding repetitive... J-Rod, Wiggo, Boonen, Valverde, Henao....

What's left: Rui Costa would help with a big result. Sep for the world title?

How they got there: Here we go again... Wiggo, Sagan, Boonen, Valv, Rogers...

What's left: The usual dilemma. Pinotti could surprise in the ITT, that would certainly help.

So you can see, the top eight teams have gained a great deal of separation from the pack, through wisdom and luck. They just haven't gained much separation from each other, nor are they likely to. The top three spots are going to be interesting to watch, because Sagan and Martin could close the gap on WaterBoys. If they win.