Share All sharing options for: ReCycled, by Richard Smith 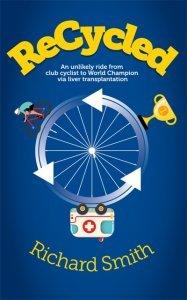 Title: ReCycled - An Unlikely Ride From Club Cyclist To World Champion Via Liver Transplantation
Author: Richard Smith
Publisher: Richard Smith
Year: 2012
Pages: 289
Order: Mamil Cycling
What it is: A tale about organ transplantation mixed with a humorous field guide to cycling in the the UK.
Strengths: Funny and poignant.
Weaknesses: Some of the humour can seem a bit repetitive after a time.

Richard Smith is a club rider, a UK-based cat 3 racer who can crack twenty-five for ten (time trialling talk, don't ya just love it?) and ranks seventeenth over twenty-five. In Shropshire. Smith is, in other words, and not to put too fine a point on it, a fred. Often also known in superior cycling circles as a fucking fred. Smith is also known in certain circles as a British, European and World Champion. Not at tiddlywinks. And not at competitive crocheting either. He's a world Champion in the cycling road race and time trial at the Transplant Games.

Aged twenty-six, Smith began to turn yellow over the New Year of 1992/93, was told by doctors that it would probably clear itself up in a few weeks and then, at the beginning of February, collapsed and slipped into a coma. On being admitted to hospital other doctors decided that no, this wasn't going to clear itself up and Smith was diagnosed with acute liver failure. The men in the white coats have a wonderfully mind-boggling name for the actual ailment - sporadic fulminant non-A non-E hepatitis - and an even more mind boggling explanation for its cause: it's idiopathic. Which translates into English as 'fucked if we know.' Patients generally not liking to know that their doctors don't know, you can understand why the men in the white coats stick with idiopathic.

Sporadic fulminant non-A non-E hepatitis Acute liver failure can be, in case you don't already know it, fatal (the doctors have a wonderfully obtuse alternative for 'fatal' as that's the sort of word that tends to give patients heart failure, but let's stay away from non-essential medical jargon, eh?). The liver does rather a lot of work. No liver = no life. Solution? A liver transplant.

Public information notice: everyone should carry a donor card (or be on the donor registration system, whichever way it operates round your way). You don't need your organs after you're dead. They'll have been eaten by worms before the Resurrection comes round so don't try using that as an excuse. Cyclists in particular should always - always - carry a donor card. If you do have the misfortune to experience a fatal wipe-out or car-bike interface, then you might as well go into the next life with a smile on your face knowing you've delayed someone else joining you there. End of public information notice.

Smith got lucky with his bad luck. The timing - a wet weekend in February - improved the prospects of a donor organ becoming available in the narrow timeframe left to save him (admitted Friday, likely to be dead Monday). By the time he awoke on the Thursday the plumbers had plugged in Smith's new liver and things were tickety-boo. Or as tickety-boo as they can be in such circumstances. In case you don't quite realise how big the liver is and the sort of mess the plumbers make plugging it in, here's Smith describing his scar:

Twenty six inches in length and known colloquially as a 'Mercedes' it stretches from one side of my abdomen to the other and up to my sternum. It is perhaps unsurprisingly the shape of the Mercedes badge or, for those of my generation, the CND symbol like the badge I wore on my blazer in the sixth form. If only Bruce Kent could see me now.

Smith, I should point out, tells his story with a dry sense of humour. Self mocking. All mocking. Daft. You might think sitting down with a Sam Beckett might be more cheery than reading about organ transplantation but save the Beckett for another time and try ReCycled. It's got a lot more in common with Scrubs than House.

Let's try this. Have you ever read 1066 And All That? And do you remember the little interactive bits at the end of some chapters, the quiz-that-isn't-a-quiz thing? Smith pulls off something like that. Here's question two:

A young man unexpectedly receives a cheque for £800. He is newly married and saving for a house. He has changed jobs recently and whilst he is not in debt money is tight. He has no savings to speak of, no pension, life insurance or common sense, and having recently had a life saving transplant, could pop off at any stage. He is a keen cyclist. What should he do with the money?

(A confession: when I first read that I thought Orange was the bike's colour, not brand. Because, well, you tell me you've got a new bike and the first thing I want to know is what colour it is. Smith, alas, neglected to tell us what colour the Orange he blew the dosh on was.)

ReCycled is two books for the price of one. In one part, Smith is talking about his own experience as someone who has received an organ transplant. In the other, Smith is offering a humorous field-guide to British cycling.

The heavy bit first. As well as being funny in a wry way ReCycled is quite poignant without ever descending into icky platitude-ridden group-hug mush. Or if it is it could be that I buy that brand of icky platitude-ridden group-hug mush. Something that's important not to overlook about what happened to Smith is that he had a real near-death experience. Not that sort of near-death experience many of us will have had when you've planted your front wheel into a massive water-filled pothole while hooring down a descent, done that slow-mo thing where you marvel at the grace with which the back wheel comes off the ground while simultaneously wondering what sort of mess your head is going to make when it ploughs into the tarmac, especially seeing as you weren't wearing a lid. Smith's was a real near-death experience, the one that leaves you mentally as well as physically scarred when you come through it. Dealing with that sort of shit can be a bit of a head wrecker. The sort of head wrecking they don't sell lids for. A lot of people don't try and deal with that sort of shit, they just file it away with other sorts of shit of a similar type. Until one day the shit starts seeping out. And things turn very, very brown. Smith's story of how he did - or didn't - deal with the mental trauma makes for an interesting read.

Now, pop quiz time. Great Britain has, you might have noticed, gone through a Summer of Sport the like of which has never been seen before or will ever be seen again, starting with Chelsea winning something and ending with Andy Murray winning something else and in between a load of other people winning lots of other things. Frankly, you'd want to have been on one of those disappearing ice floes up in the Arctic not to know about it (and even there some bastard TV crew looking for a stranded polar bear to film would probably have spotted you and wanted your opinion on Britain's astonishing ability to organise the Games). But did you know that, as well as the Olympics and the Paralympics and all the other usual guff, this Summer also saw the European Transplant Games taking place? (I only noticed because Ireland bagged one or two medals, which rates as news over here).

The original idea of the Transplant Games was neither a celebration of sport nor of Otherness, rather it was simply a canny bit of marketing: the British love sport, put transplant recipients in a sporting environment and - with all the attendant publicity - you might just raise awareness of the need for, and wisdom of, organ donation. With the added bonus that the Games would promote physical exercise within the transplant community. Thirty-four years on, that's pretty much what they're still about. Only now on a ... well not quite a global level, but definitely trans-national.

Entrance to the Games is open to anyone who's had a transplant (a real one, organs and bone marrow, I'm pretty sure hair doesn't count. Though I must admit to not having actually checked the rules...). Smith discovered the Games a year or three after his transplant and thought they sounded interesting. Having recently taken up mountain biking he thought trying the cycling in the Transplant Games - then just the one event, a brief road race - might be a worthwhile target to aim for.

Over the years since an extra event - a short time trial - has been added to the Games' schedule. In 1999 Smith bagged a bronze medal in Budapest, Hungary. Two years later, in Kobe, Japan, he became World Champion for the first time. In 2003, in Nancy, France, Smith became a double World Champion, the time trial added to the Games and he winning it and the road race. After a time out Smith was back in 2009 for the Games in Sydney, Australia, where be bagged another gold in the time trial and a silver in the road race. And then, last year, in Gothenburg, Sweden it was another two golds.

Like the Games themselves, ReCycled helps promote organ donation in the wider community, as well as plugging cycling within the transplant community. It also fulfils the latter role within the wider community: Smith's story of how he got into cycling and got better at it is well worth the read if you yourself are relatively new to two-wheeled life, particularly in the UK. Here Smith covers much of the normal ground, from the incipient gear fetishism through leg shaving and on to explaining the anthropology of some of cycling's various tribes. Let's take one quick example to show you what we're dealing with:

This chap will tend to be a larger gentleman, possibly getting on in years and whatever his name the initials HMS, as in Her Majesty's Ship, will prefix it. Due to his choice of gearing it will take him a long time to get up to cruising speed and he will be unable to change any parameters like speed or direction during his voyage without written notification sent several weeks in advance. His leg speed will be similar to a torque-heavy marine diesel engine slowing imperceptibly when riding up a gentle incline and increasing marginally when descending. Under no circumstances will he change to smaller gears as he will not acknowledge their existence.

His style of riding and, more particularly, the fast times he records will infuriate those who coach cycling and know, for a fact, that fluid and fast leg speed is a far more efficient and faster way to ride.

Overall, the mix between the different sides of the stories in ReCycled - the funny and the serious, the personal and the general - is well balanced, and the whole thing handles well and makes for an informative and entertaining read.