The town of Brakel and its former inhabitant Broerie proudly present: The GP Impanis - Van Petegem, a brand new Belgian SSR. So why should you care? After all Belgium's got so many small races. Well, this is the last pro-race before the worlds, and several big names will race here.

Oh, did I mention Sporza will broadcast this one live? 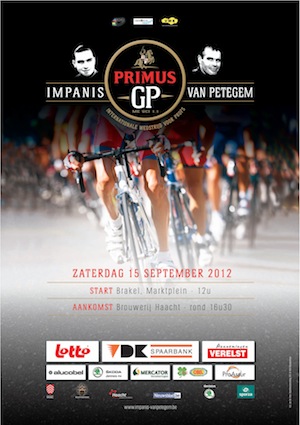 The race will be held next saturday. That's the day before the worlds TTT, so all the riders who have been selected for that event won't start here. But there are plenty other who want to test their legs one last time exactly one week before the worlds road race.

The race is named after Raymond Impanis and Peter Van Petegem. Impanis, nicknamed het 'Bakkerke van Berg', was a racer in the 1940's and 1950's. He won the Ronde van Vlaanderen, Paris - Roubaix, three stages in the TdF, the Paris - Nice GC (twice), so he clearly was no slouch. This is what he looked like:

I probably don't have to introduce Peter Van Petegem. Van Petegem, aka 'de Zwarte van Brakel', was born and raised in the town of Brakel, and he lived there for most of his career. At the end of his career he moved... 200m outside the town limits.

The fact that Van Petegem has his roots in Brakel, explains why the race will start there. So what's the link between Impanis and Haacht, the town where they've drawn the finish? Well, actually there is none. Impanis lived all his life in Berg (Kampenhout). But the race is sponsored by the beer brand Haacht. The brewery is located in Haacht, a town that is about 10km away from Kampenhout.

The organisers absolutely wanted this spot on the calendar. With the worlds being only 200km away from Haacht, they thought they could attract a strong field of riders and a lot of publicity. That strategy wil probably work this year, it might even work in 2013 (Firenze) and 2012 (Ponferrada). But what if the worlds are held on another continent? I doubt they'll be able to bring a strong field to the start then.

Okay, so the race starts in Brakel, the centre of the Vlaamse Ardennen and the rest of the universe. And it finishes in Haacht. But what happens in the 201km in between?

They start in the Vlaamse Ardennen and the course -especially the beginning- looks quite bumpy. But don't be mislead. They won't ride any of the traditional Vlaamse hellingen. Instead the organisers opted for wide open roads and a bunch of clims that can be taken in the big ring. Some of the climbs are:

- Kleiberg in Brakel (they climb it, but some of you might know it fom the RvV sportive. It's the long twisty descent towards the centre of Brakel, between Valkenberg and Tenbosse)

- Trap Op in Horebeke/Brakel (the road where Van Petegem lives and the hardest hill of our sunday groupride, also known to the sportive-participants as the downhill right before the cobbles of the Haaghoek)

- Guilleminlaan in Geraardsbergen (the backside of the Muur).

After a short lap through the Vlaamse Ardennen and the Pays des Collines, the riders will pass a second time through Brakel before they leave towards Brabant.They'll hit Brabant Wallon first and the course passes next to the Ronquières inclined plane, which is basically an enormous elevator for ships. More wide roads will bring the peloton to the finish in Haacht. My guess is that the organisers chose all these wide roads because they know the riders don't want to take any risks right before the worlds. It's a wise choice, but I still expect a lot of abandons if it rains or if it's very windy.

Wile most part of this course seems bumpy, it isn't actuall all that hard and with the last 30km being flat, we can probably expect a bunch sprint here.

The startlist may change, with the worlds being so close, but right now, this looks like a pretty strong field for a new race. Of course there's lots of sprinters (Greipel, Kittel, Veelers, Fenn, Goss, Nizzolo, Van Dijk,...), but also a favorite for the worlds (Gerrans) and some outsiders (Voeckler, Kruijswijk, Fuglsang). And of course Zdenek Stybar.

Will we have a man on the scene?

We will. The race starts only 1,5km down the road where my parents live, so I will be there to take some pics.

Can DDIFP watch this race?

Yes, Sporza will broadcast the last 90km, you you'll probably find a stream at the usual places.