Share All sharing options for: Cyclocross 2011/2012, by Bálint Hamvas 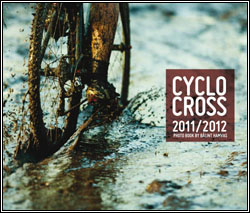 Define a good cycling bookshelf, the sort of books it should contain. To fill the spaces for the Grand Tours and the Classics, there's plenty of books to choose from. To fill the spaces for rider biographies and autobiographies, you're spoiled for choice. To find something about track cycling, there's a few choices available to you, a couple or three of them actually worth reading. Tech mechs? So many to choose from. But where do you turn to the space for ‘cross?

A quick clipping from Simon Burney's preface to the book explains the value of a photographic account of the cross season:

"In most instances words can be used to best effect to describe something new to someone. In the case of the winter cycling discipline of cyclocross I beg to differ; words somehow don't do it justice, and you find yourself using long sentences including lots of ‘ummm...', ‘well it's...', ‘you know...' without conveying a small percentage of what makes this such a fascinating and all-enveloping sport to those who watch or compete in it."

I have to confess that ‘cross has mostly passed me by. Falling off bikes and getting covered in mud and squirrel shit has never thrilled me so I've never been bothered with trying it for myself. Like the music of Tori Amos, it's something I'm happy to leave others to enjoy. Mostly ‘cross has been something that came around each winter and gave an excuse to pop up to the Phoenix Park over Christmas and watch others torturing themselves.

That said, I'm not approaching Cyclocross 2011/2012 in total ignorance: I do know who guys like Niels Albert and Sven Nys and Zdeněk Štybar are. I could probably even pick Kevin Pauwels out form a police line-up if I had to. Most of the rest of the ‘cross universe is unknown to me though. Mostly what I don't know is how the ‘cross season works: I know what the road Classics are, but which of the ‘cross races are more important than others? So the question for me was how much extra knowledge - understanding of and feeling for ‘cross - would have I have acquired by the time I got to page the last of the book. 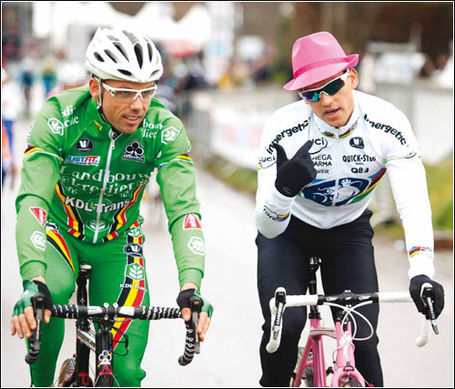 Confession: it took me a few tries to get to the end of Cyclocross 2011/2012. The problem? I kept stopping to look at the photographs. Ordinarily, a lot of cycling photography passes me by. It's pretty ordinary, and so I don't have many cycling photo albums on my bookshelf. But Hamvas's pictures worked for me not just as race reportage but also as proper pictures too. The sort of pictures that make you want to pause and enjoy them. 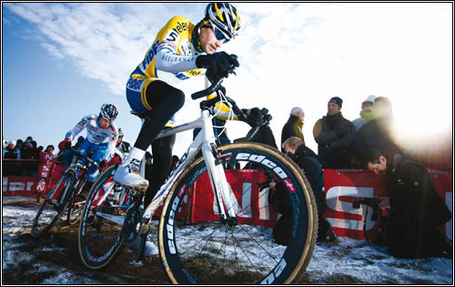 There is more to Cyclocross 2011/2012 than pictures and that more is the words from Caroline Cardinaels. Here's Cardinaels from the report on the World Cup race in Plzen:

"Wine. Ruins. Scotch, antiques, leather, Sven Nys. And according to several accountants, diversified investment portfolios. All things that get better over time. Or, in the case of Nys, wilier at least."

As that brief quote indicates, the accompanying text is fun and playful, not just a simple 'this rider won, that rider lost' race report.

One of the things I have learned reading Cyclocross 2011/2012 is that there's not as much mud in 'cross as I used to think there was. But there's a lot more sand than I had realised. Here's Cardinaels again, from the Zonhoven race in the Superprestige series:

"Millions of years ago, Zonhoven was underwater, sort of like a Belgian Atlantis or what the Fiji islands will be like in fifty years or so. Big seas covered everything, making it rather hard to cycle. But thankfully, the seas withdrew. And what they left was sand. Lots and lots of sand."

The rest of this piece goes how to explain how that sand came to feature in the Zonhoven race. How Tom Meeusen was out for a bike ride one day with Erwin Vervecken. How they arrived at a big, steep sandpit. How Vervecken - a triple World Champion - dared Meeusen to ride down it. Which Meeusen dared to do. And then Vervecken did to. And the next thing you know the big huge sandpit was added to the race course and everyone had to do it. 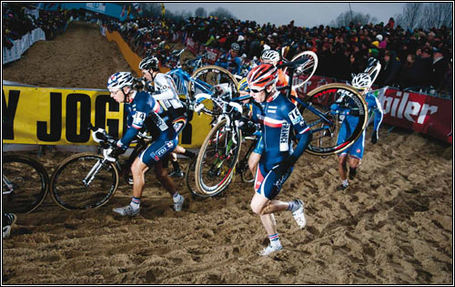 Just think about that for a moment: sixty-one thousand fans. Standing in the cold to watch bikies go by. These fans are one of the things that make ‘cross photos more fun than road or track one. In Cyclocross 2011/2012 there's a shot of a group of six Štybar fans who've gone to the bother writing Š's nickname on the back of their ponchos. Only they haven't quite got themselves arranged in order properly and are thus anagrammed (‘T!BYYŠ'). Or there's one of a kid with pink wellies graffitied with exhortations for Štyby to 'go baby, go.' Elsewhere, there's a pic of a Kevin Pauwels fan, fingers on both hands crossed, almost looking like she's praying for her man to bring home the bacon. Mostly though it's just fun looking at pics with lots of fans in them and reading all the different reactions.

So I've learned that there's sand in ‘cross, as well as mud. What else have I learned? Well this I kind of half knew but never really paid attention to, but there's also cobbles. Real cobbles. Koppenberg cobbles. But cobbles and sand aside, mostly there's mud:

"Modder. Bagger, slib, derrie, slijk. Smurrie, dras, blubber, drek. Whether or not the Inuit have more words for ice and snow than English does, is a matter of academic debate. But what is a well-known fact is that Flemish can describe mud with more precision or accuracy than any other language in the world."

Other things I've learned include that Belgians will try and make alcohol from anything (Hazelnuts? Cactus?) and that the Americans aren't the only ones who know how to hold ‘cross races in the dark. Night-riding is something I like, cause things really do go bump in the night when you're out on a bike, especially when you find yourself on a country road that's supposed to be closed because someone's dug a great big hole in it in order to put in some new pipes. But I digress. Back to ‘cross:

"Some things are simply better done in the dark. Watching films and telling scary stories, for instance,. What fun is it listening to tales of werewolves and vampires - and I mean tales of real werewolves and vampires, not the ridiculously perfect Disneyfied versions - when you can clearly see that there are, in fact, no werewolves nor vampires anywhere near your campsite? I'll tell you: it's no fun at all.

"On instinct, you'd guess that cycling is not one of the things generally improved by darkness. But each year Diagem proves us wrong. The race starts at 1930hrs on a Friday night and in wintertime, Belgium is completely blanketed by darkness that late in the evening. Floodlights provide ample light for the riders to see where they are going and the special setting makes for a remarkable and peculiar atmosphere."

In addition to the races Hamvas also took some time out to pull together a few photo essays, paying a visit to Ridley and Bioracer's factories, taking a look at time keeping and offering a portrait of Bart Wellens. Two years without a major victory Wellens was threatening to quit the sport until his win in the GP Rouwmoer during the GVA series.

As well as the guys Cyclocross 2011/2012 also pays attention to the other peloton, with Nikki Harris, Helen Wyman, Daphny van den Brand, Marianne Vos and plenty of others all featuring in Hamvas's photographs. All told, you seem to get a well-rounded portrait of a season's ‘cross.

I acknowledged at the start of this that my knowledge of ‘cross is limited. Hamvas and Cardinaels haven't quite turned me into an instant expert, ready to tell you who's going to do the biz in Vegas, but what they have given me is a greater appreciation of ‘cross. And they've also entertained me. Really, can you ask much or of a book that you be educated and entertained by it?