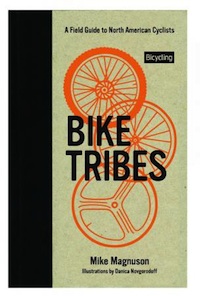 Ever wonder how many different types of cyclists there are? Well, now there's a place to find the answer.

SPOlLER ALERT! It's 20. There are 20 different types of people who inhabit the cycling world, at least if you're just counting species of people who actually pedal a bike. Well... 21 if you count artistic cycling. Also Interbike is happening this week, and from my experience there I can think of another dozen subspecies inhabiting the cycling world, mostly relating to sales, marketing and the media. But these people change into one of the pedaling species on the weekend, so maybe it's not worth getting into.

Anyway, I know about the variety of cyclists now, because Mike Magnuson's Bike Tribes: A Field Guide to North American Cyclists has laid them all out, one by one, in a succession of 38 stories. Thirty-eight lines about 20 cyclists, if you will. For each type of cyclist, Magnuson creates one or more fictional characters whose purpose is to demonstrate what the cycling sub-genre is about. There's Todd, the casual mountain biker, who crests a small hill for exercise and vanity, only to be passed by daredevil women on the way down, unwittingly mocking him. There's Bill, King of the Cat-4 40+ masters guys. There's Chareesa, the triathlete who's bored to death with her personal training clients. There's Adam, the greying randonneur... Dave the RAGBRAI skinny dipper... Tray with a fixie... Critical Massers... and dozens more.

ANOTHER SPOILER ALERT! In the end there is an overarching message of inclusion to this whole list of biker types, which is nice enough. Sure, for my money it's not other cyclists who trouble me when I'm on a bike, but if we're to take over the world from the Car People (and we will, mark my words), it's good to know that there are some ready coalitions. Anyway, I think I get the purpose of this book's existence, which is Magnuson painting the multicolored tapestry of Cycling, for all those laboring under narrow, two-toned impressions to see.

At times, though, I wish he'd just made a list, with some photos or illustrations. Because it's the fictional vignettes where this book struggles. They're grouped around a short, character-less explainer, which binds the vignettes to the subject, but way too many of the fictional stories leave me not caring at all about the characters. Granted, hooking the audience in 2-3 pages is a tall task. Maybe if Fred and Ellen, the coffee-sipping century riders, talked for 10-15 pages about how they met over cycling, how they found each other's company or nature or other people or an escape from their shitty jobs through riding, something worth caring about, then I'd care about them. But they can't, there's no time. So instead, I am expected to get hooked by dialog. Like this:

Fred winks at the lady and says, "My wife and I are volunteers."

Ellen says, "Yeah, we volunteer to drink coffee wherever we go. And we have relatives in Tennessee."

Fred says, "Tennessee Volunteers. Get it?"

The lady appears not sure whether to laugh or be angry or to come out and say what's probably on her mind: Why on earth (sic) do you people want to ride 100 miles in the first place?

p. 84. Me, I'd go with angry, if cringing isn't an available option. Also, the last time I worked at a big ride two months ago, pretty much all the volunteers knew exactly why people were doing the ride and had done it before or were planning to do it next time themselves, but that's a minor quibble. The bigger point is, even when the book isn't telling jokes that fall flat, it's often writing cliches about cyclists. The cross racers are dressed up like members of KISS. The rando dude is an aging loner and the RAGBRAI people are hippies. The masters champ is waaaay too into being the masters champ (OK, some cliches are 100% accurate).

Often is not always, however, and some of the stories Magnuson crafts start to work, if that's possible in two pages. "The Shrinking People," a chapter about weight loss, touches on the complex emotions often involved, and both vignettes are effective and bordering on poignant. I also like that the chapter on commuters, the longest in the book, includes not just happy smiling car-abstainers but a vignette about a kid who got busted for DUI -- a reluctant commuter. Life is complicated and stories get weird. Not enough of Magnuson's stories get weird. And no, cyclocross racers in costumes don't count.

Magnuson blogs for Bicycling Magazine about regular-dude-on-a-bike stuff, which I can more or less relate to, but reading about it isn't my cup of tea. It clearly is the cup of tea for much of Bicycling's readership, probably the most diverse audience among the large US mags. So there's a place for this book, to bring together disparate cycling subcultures who read it, say "hey, that's me!", and then read on to discover their neighboring subcultures, whom perhaps they've overlooked up to now. He humanizes each of them -- which is to say that the book should be taught in Driver's Ed classes. But he doesn't bring enough of them to life, and when I invest myself into 200 pages, I need more than lists and fly-by characters.