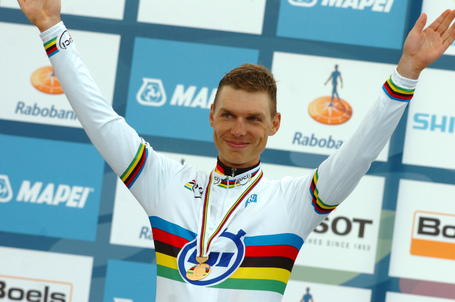 Germany's Tony Martin successfully defended his world title in the Elite Men's individual time trial, his second winning performance against the watch in this year's UCI World Championships in Valkenburg, Netherlands. In a tense two-man battle with the top time of Belarus's Vasil Kiryienka was never a major obstacle to victory, Martin barely held off American Taylor Phinney's quest to become the youngest ITT champion in the race's history.

Kiryienka, who took the bronze medal, posted a surprising time of 1.00.23, a time that stood up until the final three riders took the course, as Phinney's fellow American and BMC teammate Tejay van Garderen missed out on posting the best time by less than five seconds. Van Garderen's recent run of form and consistency in the time trial suggests that he too may have a rainbow jersey in his future in the event, at least where he can take advantage of his climbing prowess. Frederick Kessiakoff of Sweden also chimed in, as expected, with a top time only a second back of van Garderen's. But Kiryienka's effort was the upset of the day, a delight to his 2013 team, the crono powerhouse of Team Sky. 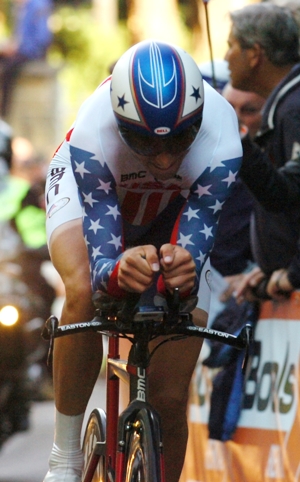 However elated Kiryienka may have been knowing he had a medal once van Garderen missed out, it was clear that the top two spots were being contested on the course. To nobody's shock, Phinney posted the best first split and Martin the best second split, by which time the two were closing in on a minute's advantage over Kiryienka. Nicknamed the Panzerwagen after a vintage WWII model of an armored tank, Martin's second split (13" better than Phinney) saw him reverse a four-second deficit at split 1 as the hills took their toll on the big, powerful American. But the Cauberg, the course's signature climb which peaks out in hailing distance of the finish line, did not trouble Phinney, as he smashed the hour mark and closed his deficit to Martin to a mere five seconds.

It is fair to say that Martin's climbing ability helped, given the three uphill portions and Martin's dominance of the middle third of the race, but it's not fair to say that Phinney's climbing ability was a serious obstacle. Phinney simply lost to a much more experienced rider who also happens to be one of the two best time triallers of his generation. Martin's success follows on the heels of having powered the Omega Pharma-Quick Step team to victory in Sunday's team crono event. He can go for the Triple Crown in Sunday's Road Race, though he'll do so as an underdog of epic proportions. Results: