Share All sharing options for: Dwars Door Vlaanderen Gets Bump In UCI Status 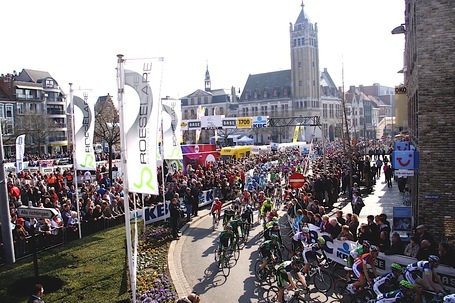 Just to show doubters like me that they can use their powers for good as well as evil, the UCI have now rated Dwars door Vlaanderen -- the traditional opener of the three-week Cobbles season -- as a 1.HC race, up from the 1.1 classification of last season. The bottom line is that the total of points awarded goes up. The winner gets 100 UCI points instead of 80; places go 15 deep instead of 12; and some other confusing UCI rule stuff applies. Bottom line, Dwars gets more enticing.

How much more... one cannot say. Last year, for example, BMC didn't make the start at Dwars. Neither did Euskaltel, FDJ, Liquigas, or Radio Shack-Nissan-Trek. So, missing from the field by team choice were Cancellara, Sagan, Hushovd and Gilbert, to name a few. Does going to 1.HC guarantee a better field? Nope... if you look at the closest comparison, fellow 1.HC race Brabantse Pijl, they were at the same number of top-level teams.

But the added points means two things. First, more points, and the obvious interest that follows. Secondly, a slow consolidation of the Cobbles Season, potentially into a full-on UCI World Tour run. Well, probably not, because the Belgian, Dutch and other northern Conti teams would want someplace to race, and if the number of entries shrinks to World Tour wildcards only, that's maybe a bit too much. Also, the World Tour, like the Podium Cafe Calendar, has to balance its Belgianness against the other nationalities, for the sake of fairness, so don't look for the entire thing to go WT.

But it would behoove cycling to bump up Dwars (and not Driedaagse de Panne or the Scheldeprijs). This along with the E3 Prijs tends to function as the best preview of the Tour of Flanders. Riders use it to hone their Ronde form, with the added incentive of chasing a valuable palmare while they're at it. While the final km are decided as the race exits the Vlaamse Ardennen, because a preview of de Ronde isn't supposed to be too similar, the course nonetheless took in 13 hills (e.g., Oude Kwaremont, Paterberg, Steenbekdries, etc) and three of the most notorious flat cobbled sections (Holleweg, Haaghoek, and Varentstraat).

Oh, and Dwars is under the Flanders Classics umbrella. So there's that. Don't ask me whether that's a good thing or not.

Oh, and the 2013 UCI World Tour Calendar is out. The only notable addition is the Tour of Hangzhou in October, 2013. This will be quite exciting, since the 2012 version of the race was canceled. Yep, that's a real World Tour-level event there. Anyway, lots of date-shuffling, as usual. No Giro dell'Emilia, so my work here is far from finished.