If you thought the Olympic road race was exciting, wait until you see what the women's peloton can do on a truly exciting course! It's a simple one to describe - 8 laps of a 16km circuit that includes two climbs - the Bernelerberg (900m at approximate 5%) and the legendary Cauberg - 1,200m at average 5.8%, but reaching 16% at it's steepest. The women are very familiar with this climb - after all, they've been up it for the trade team TTT and the Individual TT - and it featured in the last stage of the Brainwash Ladies Tour. And here's what happened....

Yes, Marianne Vos won, in fine form. And the question on everyone's lips should be "Can she do it again and achieve the double of Olympic and Road Champion?" Find out who'll be trying to stop her below the jump.

Vos has had an interesting history with the Worlds. The first time she raced, in the Junior World Championships, in 2004, she won her first rainbow jersey. She was second the following year, to Marta Bastianelli, then in 2006, raced and won her first elite Road World Champs.... it remains her only adult rainbow jersey (she's also won two on the track, and five in cyclocross, and she's still only 25!) but every year since then, she's come second. It doesn't matter what the course is like - hilly, sprinty, horrifically tough - she's been THE rider to beat.

For the last three years it's been the Italians who have been her, racing with that improvisational spirit of not caring who wins, as long as it's one of their team. In 2009, it was Noemi Cantele and Tatiana Guderzo who tag-teamed in beautiful style, harassing Vos between them until Guderzo broke away for the win; in 2010 it was Giorgia Bronzini, almost invisible in the front group until it came down to the sprint, and she appeared, as if from nowhere, to jet past Vos and Emma Johansson for the win; and last year it was Bronzini again, who timed her sprint perfectly... But the Olympics showed that if there's one thing the Dutch have learned, it's how to beat the Italians at their own game, and the race will be exciting to watch! 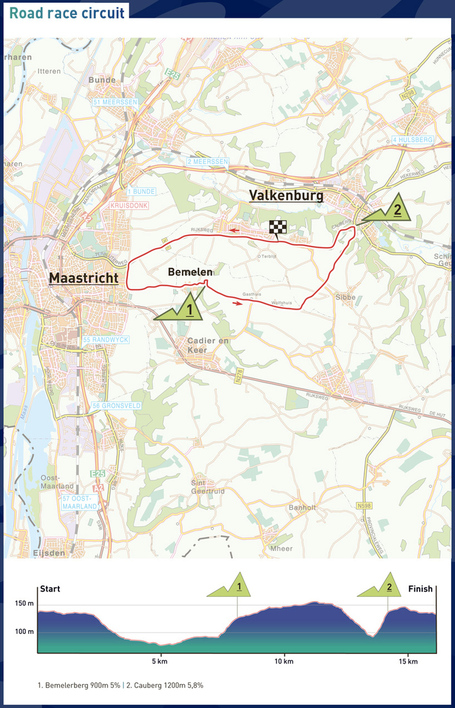 Here's the course - as I said, eight laps, without the 100km warm-up section the men ride. That Brainwash stage was much more complicated to map. In a season when a lot of the traditionally hilly routes have turned flat (most likely to mirror the Olympics course), it's refreshingly hellish!

So, who do I think will do well? Well, obviously Vos - she really, really wants it, apart from the Brainwash stage, she rode the Cauberg three times with a broken collarbone in the Holland Hills Classic! It'll be a wall of orange, cheering fans, and that will just spur her on!

Evie Stevens (USA) was second behind Vos at Brainwash, and has already won a gold (in the team time trial) and a silver medal (in the ITT), showing that the Cauberg is her friend! Stevens has had a fabulous season, beating Vos at the Flèche Wallonne, and being the only rider apart from Marianne to wear the maglia rosa in the biggest women's stage race, the Giro Donne.

Then there's the 2011 and 2012 ITT Champion, Judith Arndt (Germany), who's retiring at the end of this race (boo!) but who Vos herself has identified as a big threat. Arndt won the road World Champs in 2004, and I'm sure she'd love an extra rainbow jersey (to go with 2 for ITTs and 1 for the track) to round off her career.

The other rider Vos is describing as a favourite is Emma Pooley (GB). Pooley has missed the hills this year, so rode the Haute Route cyclocportive through the Alps, where she came 4th overall.... out of all the men too (it did make me laugh, I'll be referring to this next time some dude tells me he's ridden with female pros, and he's much faster than them, honest guv). Watching her in the TTT and the ITT, she made the Cauberg look easy - and as a rider well known for attacking with solo escapes on these kind of courses, if she gets to ride for herself...

The other Emma, Emma Johansson, could be a strong threat here, too. Her 2012 has been a hard one, starting with two broken collarbones after being hit by a car while training - and it was interesting to see her get stronger and stronger with every day of the Giro Donne, culminating in her final stage win.

Finally, watch out for the entire Italian team! Giorgia Bronzini traditionally rides herself into form for the biggest races of the year, and while she's a sprinter, she was, very interestingly, 9th on that Brainwash stage. But then, her Italian team-mate, Elisa Longo Borghini was third on that stage, and is having a fabulous year. Then, as I've already mentioned, Tatiana Guderzo and Noemi Cantele are experts in Vos-baiting, and attacking on their own behlfs (I loved watching Cantele completely disrupt the sprint trains in the final kilometres of last year's Worlds, attacking and throwing the other teams into chaos!). If it sounds like I'm saying that every single Italian rider needs to be watching, that's the intention!

Whatever happens, with a course this special, whoever wins will be a true champion. I can't wait to see how it plays out! Don't forget to join us for the livethread, and we can see how wrong I am!