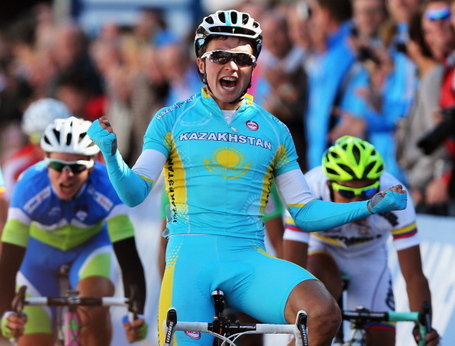 Ten laps up the Bemelberg and Cauberg climbs were not enough to deter the sprinters in the Under 23 Elite Men's race this morning in Limburg. Though the race was characteristically full of attacks, a group of fifty riders remained together over the top of the Cauberg on the final lap, resulting in a sprint of strongmen. Kazakhstan's Alexey Lutsenko snuck by along the barriers to barely hold off charging Frenchman Bryan Coquard at the line, the two riders separated by less than a wheel's length. Belgium's Tom Van Asbroeck looked to be in a good position with 100 meters to go, in the lead after a strong leadout from his teammates, but faded in the headwind blowing down the finishing straight.

Spurred by the attacks of Austria's Greg Preidler and Australia's Jay McCarthy, a small group of riders got separation over the top of the Cauberg on the final lap. However, a moment of non-cooperation doomed their efforts in the face of a headwind in the final two kilometers. Though the eventual podium was struggling over the final climb, they were able to move towards the front and get position in the final 500 meters for the sprint. The Belgian team kept the speed high after the final climb, highlighting the importance of having several teammates near a sprinter on the final lap. This might be a preview of the difficulties on offer in the Men's road race on Sunday, as a breakaway on the Cauberg will have difficulty establishing a large enough gap to encourage cooperation and withstand a chase from behind.

Podium finishers Lutsenko and Coquard are both moving to the professional ranks next season. Lutsenko will join Pro Team Astana and be mentored by veteran Kazakh rider Alexandre Vinokurov while Coquard has signed a contract with Europcar.