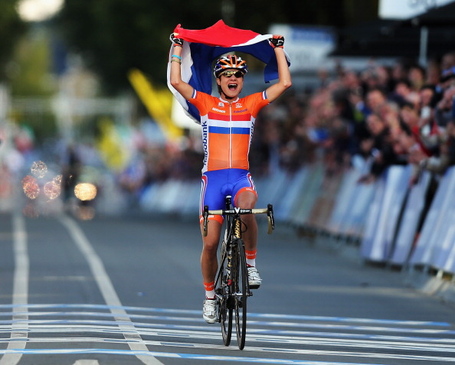 We always knew that the women's World Championships road race would be spectacular - but this had everything - thrills, spills and spectacular attacking. I'm still on a huge high! Below the jump, I'll remind you how the race unfolded - and come back to the comments for all the post-race video, interviews, blogging and twitter fun that we can find.

Firstly, I have to apologise for using even more exclamation marks than normal (sorry tED!) but oh my word, what a great race!

It was 8 laps of the 16km course, with two climbs each lap. The peloton started out with Team USA and Great Britain doing a lot of work on the front, and Robyn de Groot having a weird crash, where her chain slipped, her wheel buckled and she went down - but that was nothing to the enormous crash on the narrow roads on lap 2 that took down or delayed all but around ten of the peloton. As riders untangled their bikes and chased back, Megan Guarnier (USA) started the first of the attacks, and the race began in earnest.

The attackes came thick and fast - from the Americans, to Loes Gunnewijk (Netherlands) and Judith Arndt (Germany) to a little group of Kirsten Wild (Netherlands), Trixi Worrack (Germany), Liesbet de Vocht (Belgium) and Jessie Maclean (Australia). On the fourth ascent of the Cauberg, Lucinda Brand attacked hard, and when she was chased down by the Germans, her team-mate Adrie Visser had a turn. Attacks, attacks, attacks, groups escaping and being caught, all the big teams using the hills to try to force an advantage. And then, on the fifth lap, what was to be the decisive break was formed.

The USA's Amber Neben was the one who set this one off, attacking on the Bemelerberg, with Charlotte Becker (Ger), Rachel Neylan (Aus) and young talents Anna van der Breggen (Ned) and Rossella Ratto (Ita). At first, it seemed like this was yet another doomed break, never getting above 36 seconds' lead. Neben took control, trying to marshal the forces to ride hard, but they only had 29 seconds as they entered lap 6. Great Britain were active on the front, but then, as they hit the Cauberg, Marianne Vos (Netherlands) decided to attack. It took everyone by surprise, and only Elisa Longo Borghini (Italy) could follow her. She soon reached the group, and the dynamics changed - now 2 Italians, 2 Dutch, a German, an Aussie, an American - and with one of those riders Vos, the group took off. Despite some formidable riders chasing behind them, including Emmas Pooley and Johansson, the group had a lead of over a minute and a half. At every climb, Vos' attacks grew stronger - and on the penultimate time over the Cauberg, it became obvious that she was loving the crowds and the hill. Becker and Ratto were dropped - with Longo Borgini and Neylan looking very strong.

On the final lap, Van der Breggen attacked, forcing the others to chase - and then, the final time over the Cauberg. Neylan attacked first, but she was no match for Vos, who caught and passed her, disappearing up the road.

From then on, the race was won. The final kilometre was a victory celebration, Vos openiy crying as she sped past the ecstatic crowds. She even had time to grab a flag from a spectator, crossing the line looking ecstatic - celebrating the end of an incredible year, where she won the Olympic gold, the Giro Donne and the Road World Cup series, and finally broke her five-year string of second places. A truly worthy winner, it was impossible to be anything other than happy for her. At just 25 years old, she's now won ten rainbow jerseys - Junior Road World Champion, 2 Senior Road World Champs' titles, 2 on the track and an amazing five in cyclocross. She truly is the very best rider in the world! 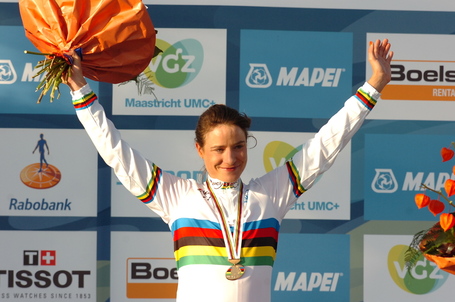 Behind her, Neylan came second, a fabulous vindication for the Australian, who's suffered through a hard year. Problems with her team meant that she didn't even have a bike to ride two weeks ago - but her season finally turned around when she raced the Tour de l'Ardèche with a mixed team of Emma Pooley, Sharon Laws, Marijn de Vries and Petra Dijkman. Pooley won, and Neylan finished 4th in the GC - her best result in a UCI race at that point, leading to her being picked for the Australian National Team, a decision they must be very proud of. After the race she looked stunned at what she'd achieved - check out Kristof Ramon's slideshow! It's safe to say that she won't have a problem finding a team for 2013! Find out more about her on her blog on her website, and in my interview with her last year, last here on the Café.

Rounding off the podium was Longo Borghini, who had come third on the Cauberg stage of the Brainwash Ladies Tour, and third on the GP Plouay World Cup. She's had a superb season, and has cemented her reputation, at 20 years old, of being the next big thing in Italian Cycling. Neben came in in 4th, with Van der Breggen and Ratto coming in solo behind her, and New Zealand's Linda Villumsen won the sprint for 7th. A beautiful race, with a deserving podium, and a great end to the season.

Congratulations, too, to Straw Dog, who won the FSA Virtual Directeur Sprotif competition with his Vos-lead team. Check out your results on the FSA website - and huge thanks Ted for running the website, and Ted, Jens, Majope and Monty for keeping up with the scoring all year. You're all fabulous!

I can't believe the season is over - but what a way to go! Share anything you find about the race in the comments, and check back to see what others find. I'll be sitting on the sofa, grinning widely, remembering how great it was!