Eighteen wins in 2011, three in 2012 so far. But this year's win trumps all of the year before: Philippe Gilbert has shown that he was rightly crowned absolute favourite for the worlds in Valkenburg by winning the rainbow jersey in style. After a 11-men strong break without any Belgians in it, brought back by hard work from team GB and the defending world champ, the race played out wonderfully for team Belgium. 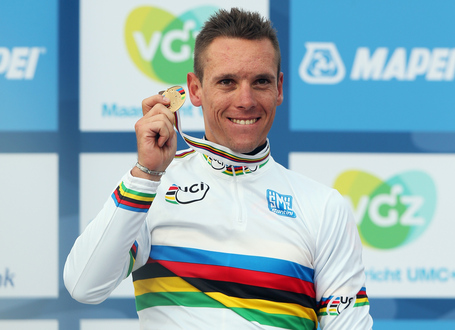 A strong break including Fuglsang, Tiernan-Locke, Voeckler, Meersman and Leukemans went but was eventually brought back; and as is always the case in the worlds, rider after rider dropped back and out, either from having done their share of the work (Cavendish, Devenyns) or from not having the shape or health needed to win anyway (Wiggins, Breschel). The unlucky ones got caught up in a very big crash about midway into the peloton, Uran, Henao and Rast were some of the victims.

In the end, the race played out much like the U23 version, and we went to the line with a peloton of about 60 men strong. Still there: Philippe Gilbert. It didn't take a genius to know what would happen when that group reached the foot of the Cauberg. Gilbert went hard, the rest hesitated for a split second. Valverde, Boasson Hagen and Kolobnev followed eventually, and for a few seconds it looked like Phil would be brought back. But three guys chasing one man that's one too many for the medals, and a little hesitation was all Gilbert needed.

And so one of the regionals d'etappe - Liège isn't too far from here, and misses PhilGil is from Eisden which is just across the border - walked away with the victory, to many cheers from the crowd. Boss Hog sprinted to second, Valverde got the bronze. And now? "Now the finale is really going to begin", dixit Kevin De Weert. "And knowing Gilbert, it'll be a good party..."