Share All sharing options for: Milano-Torino: Contador Soars to Victory

Saxo-Tinkoff star Alberto Contador, fresh off his victory in yet another grand tour, managed to pad his resume today in the revived Milano-Torino classic. Contador's win -- not televised but reportedly the product of a last-kilometer solo attack -- marked the first time in his incredibly storied career that the Spaniard has won a one-day classic race. For all his victories, there wasn't a single one-day palmare among them. He once came in second in the Clasica Ciclista a los Puertos, which sounds like something designed for him specifically until you remember that this is Spain we're talking about. He got on the podium, just, in La Fleche Wallonne two years ago -- another race where he should have a clear shot at winning. Ninth in LBL represents his best monument effort. Maybe Bert 2.0 rides a few more classics?

Anyway, I won't bore you with stories of how the race happened, since I don't have any information. But I will list your top ten: 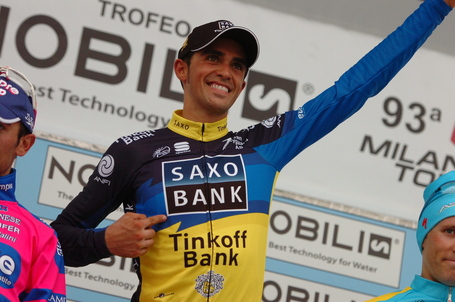