Share All sharing options for: Ten Poems About Bicycles, edited by Jenny Swann 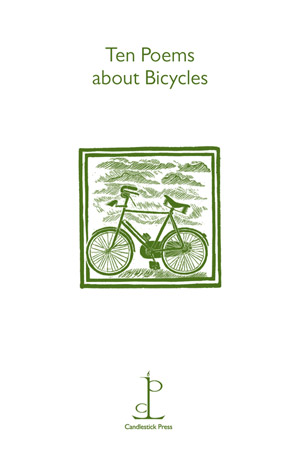 The Café Bookshelf, at this stage of its life, has covered a wide variety of cycling books. It's got reviews of standard rider biographies and autobiographies; of the histories of individual races; techs mechs books; novels; it's even got art. Ten Poems About Bicycles is, I think, a first for the Bookshelf and something I've wanted to get around to adding for quite some time now: poetry.

Here's Jenny Swann - Candlestick Press founder and editor of Ten Poems - in her introduction, explaining what the pamphlet contains:

"Ten Poems About Bicycles covers as many different aspects of the bicycle as is possible in so short a space, from its early history, through some teething problems - mostly in the brakes department - on to the affection that bicycles have inspired in their riders, and the miraculous and sometimes poignant associations that have gathered around them in poetry."

From Banjo Patterson's Mulga Bill's Bicycle ("'Twas Mulga Bill from Eaglehawk that caught the cycling craze / He turned away the good old horse that served him many days ...") we move through Connie Bleasley's whimsical Wheel Fever, past James Burns' touching Boy On A Bicycle and on to Jonathan Davidson's A Lady Cyclist Learns To Cycle ("Climbing on it, I felt it shy, / lunge beneath me / clatter to earth ...") before getting to Derek Mahon's The Bicycle.

"There was a bicycle, a fine
Raleigh with five gears
And racing handlebars.
It stood at the front door
Begging to be mounted;
The frame shone in the sun."

Mahon is a poet I happen to like, ever since first being pointed at his Antarctica ("Solitary enzyme, / Though the night yield no glimmer there will glow, / At the heart of the ridiculous, the sublime ..."). His The Last Of The Fire Kings contains one of my favourite group of lines ("... a place out of time, / A palace of porcelain // Where the frugivorous / Inheritors recline / In their rich fabrics ..." - I love Mahon's use of the word frugivorous and its Edenic implications). While everyone knows Famous Seamus, Mahon - who tends to be somewhat overlooked, even here in Ireland - is to my mind the more interesting Irish poet of his generation. He's not as dour as his ennobeled compatriot, his poetry feels (to me) that bit more alive, more real. Somehow, though, I'd managed to forget that Mahon had a poem about a bike (it's the final section of Autobiographies). Among the canonical poets I could recall Samuel Beckett (Sanies I) and Rita Ann Higgins (Almost Communication) and Louis MacNeice (The Cyclist) and Seamus Heaney (Wheels Within Wheels) and Dylan Thomas (Me And My Bike) and Pablo Neruda (Ode To Bicycles) all writing poems that featured bikes, but Mahon ... well being reminded that he too had written one was one of the delights of getting a copy of Ten Poems About Bicycles.

Mahon's poem goes to explore the delights his Raleigh gave him, the "happiness a free-wheeling / Past fragrant hawthorn hedges" and the "day-runs to Monaghan / Rough and exotic roads" (only Mahon and Patrick Kavanagh have ever pulled off the pretence that anything in Monaghan is exotic). Finally, Mahon arrives in Dublin, university days and new beginnings:

"It went with me to Dublin
Where I sold it the same winter;
But its wheels still sing
In the memory, stars that turn
About an eternal centre,
The bright spokes glittering."

At Mahon we're at the halfway point of Ten Poems. Swann's selection continues with Helena Nelson's beautiful Bike With No Hands ("One look at you and I knew / you'd be able to ride a bike with no hands ..."), Michael Donaghy's wonderful Machines ("Dearest, note how these two are alike / This harpsichord pavane by Purcell / And the racer's twelve-speed bike ..."), Paul McLoughlin's dark The Bicycle Garden ("... this gaunt tableau / of BMXs, racers, mountain bikes, / an aged Vespa with its fairing crushed ..."), Phyllis Flowerdew's curious A Spider Bought A Bicycle ("A spider bought a bicycle / And had it painted black ..."), finishing with a haiku credited to Coney ("The wind behind me / Water bottle is my friend / Watch that taxi door").

The one thing absent from Ten Poems is poetry about the sporting side of cycling: it lacks an ode to Sean Kelly, a sonnet to Mark Cavendish, a ballad about Gino Bartali, a sestina featuring Miguel Induráin, a villanelle on Greg LeMond or even a limerick for Hugo Koblet. Short of Jean-Bernard Pouy's epic (and untranslated) 54x13 I can't say as I've read many poems about this side of cycling though. As with decent novels covering the sporting side of cycling there really isn't much to choose from (Tim Krabbé's The Rider and Uwe Johnson's The Third Book About Achim being the notable exceptions in that department).

There are Jeff Cloves' poems about Tom Simpson and Fausto Coppi (check out William Fotheringham's Cyclopedia) and of course there's Alfred Jarry's The Crucifixion As An Uphill Bicycle Race but beyond that I draw a blank on poems that Swann could have even considered for inclusion in Ten Poems. Maybe by the time Another Ten Poems About Bicycles comes around someone will have enabled me - or Swann - to put that right (and, with the popularity of cycling on an upswing in the UK, it's to be hoped that it won't be long before Another Ten Poems appears).

The brevity of Ten Poems is one of its selling points (brevity being something I've yet to master I tend to appreciate when others succeed at it). It's a nice little EP compared to the Box Set that the completist in me imagines a book of cycling poems would be like (padded out with many, many, poems from the Victorian era when bikes were new and copyright has expired). And, while I can rattle off most of the list of canonical poets who've eulogised the bicycle, it's the poets I'm not overly familiar with that are the real pleasure - for me - of Ten Poems.

The other selling point of Ten Poems is the format itself. Priced at a fiver, Ten Poems is up there with your pricier greeting card but - you have to admit - its contents sure beat the platitudes of Hallmark. Pressing home the greeting card point, each copy comes with a matching envelope and a bookmark. As a cheap gift or an expensive card Ten Poems works. But most importantly it works as a little volume of poetry: something you can pick up multiple times and still find something fresh within.

The first time I read Ten Poems it was Donaghy's Machines that stood out most for me (not just for comparing bicycles with a Purcell pavane, but also for its name-checking of Schwinn). Later it was Burns' Boy On A Bicycle (which has something of the simplicty and directness - as well as the poignancy - of Jacques Prévert's poetry). On the most recent read it was Nelson's Bike With No Hands (it's such a sweet little love song - if I'd known that women could be wooed simply by a man being able to ride a bike with his arms folded I'd have mastered the art sooner).

The point here being that what you'll get out of Ten Poems About Bicycles will change with the seasons, or with your mood (such is the joy of poetry). So as well as buying copies for friends - and that is principally what Ten Poems is, a rich but inexpensive gift to give - make sure you buy a copy for yourself. Like the bicycle itself it's something that will take you to places new and familiar and with which you'll enjoy repeated journeys.