A weekend at the races: world ports and GP Jef Scherens

Share All sharing options for: A weekend at the races: world ports and GP Jef Scherens

So, nothing going on in Spain today? Ok, how about we take a trip to Belgium then? There were two races on Belgian soil this weekend (ok, there were probably more but I only went to visit two). On Saturday, the very final stage of the inaugural edition of the World Ports Classics started in Antwerp, and I was there. A day later, the grand prix Jef 'Poeske' Scherens took place in the university town - my home for seven lovely years - of Leuven. And hey, I was there also. 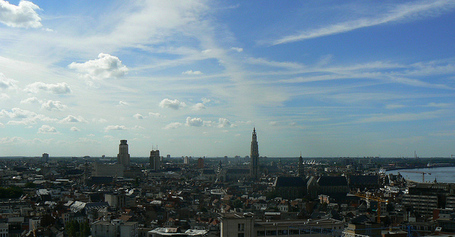 All pictures by gs. That's me. Above is Antwerp.

So, world ports classic first. The stage started at the foot of the MAS, or 'museum by the stream'. The museum is located in an area of town called little island, which seems apropos for a race called the world ports classic. Crowds were... modest. 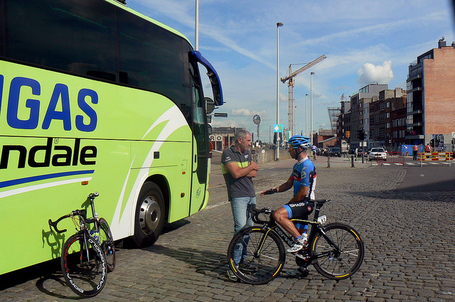 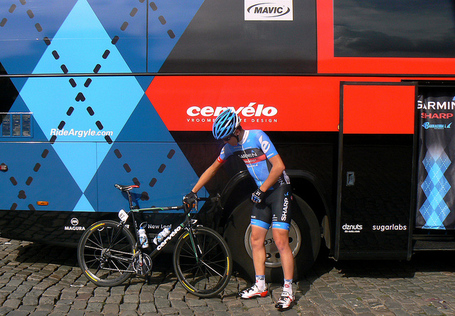 Mostly because everyone was crowded around the OPQS bus trying to get a glimpse of Tombo. The rest of the teams didn't get too much attention, except for Rabobank. And Sep, if you consider him a team of his own. He spent close to 10 minutes signing autographs, so good thing there's more than one of him. 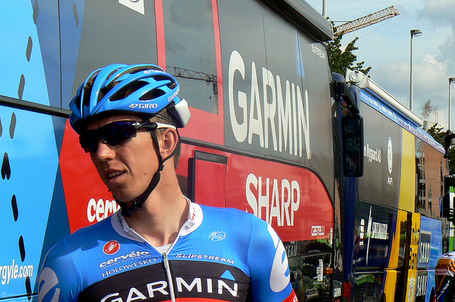 One of the Seps 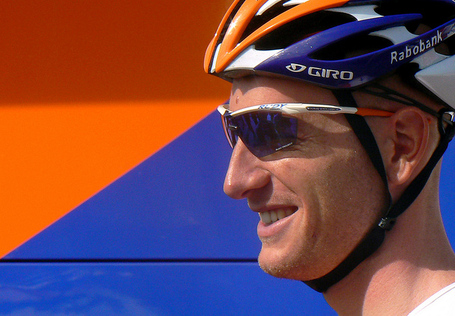 Below is Graeme Brown desperately trying to look cool in those helmets. 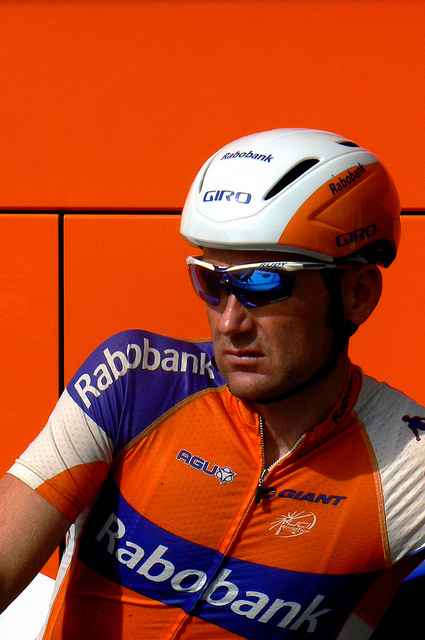 At the Argos bus an older gentleman handed Marcel Kittel a little painted figurine. He tried to explain that he made it and that he had loads and loads of them, but I don't think Marcel fully grasped the concept. 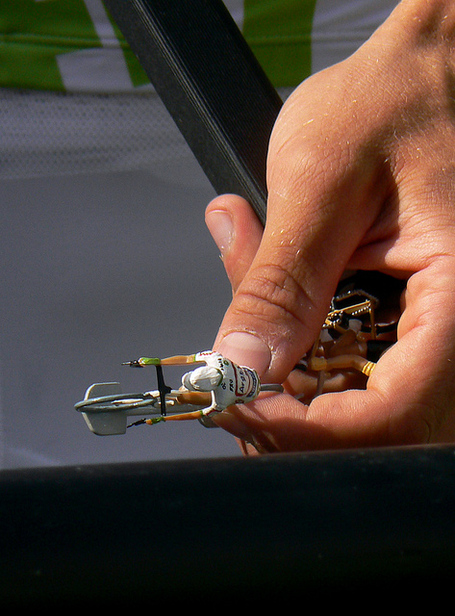 I thought it was cool though.

OPQS were joined for these two races by someone you'll hear lots about in the future, if it's up to me. Consider him the next Sep or the next crazy Thomas: Florian Senechal. The Frenchman from OPQS' feeder team won the junior Roubaix in 2011, was second in the kids' RVV and fourth at the worlds in the same year. Any questions as to why I like him? 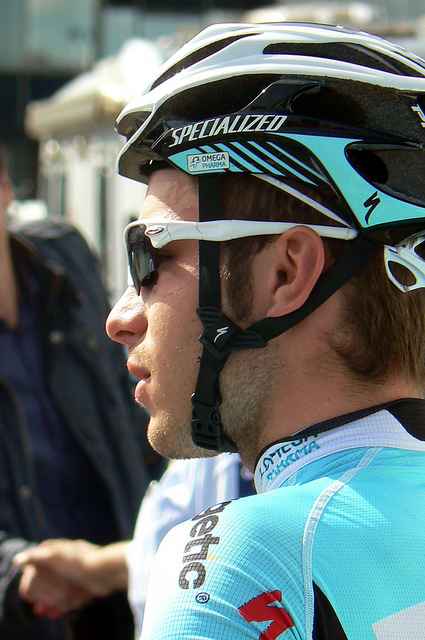 He should feel right at home in a team with el lider of the race, Tom Boonen. 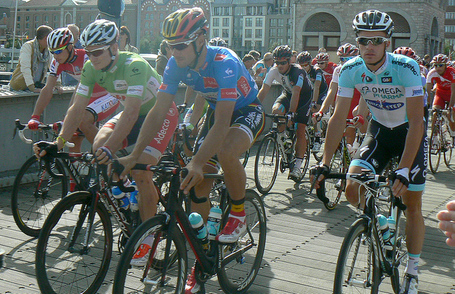 The Worlds Ports classic may not have drawn too big a crowds, but it sure meant good things for that other race, the GP Jef Scherens. Many teams just sent the same squads as they had for the ports thingy to Leuven, which ensured some much bigger names than usual at the start. Tom Boonen, Oscar Freire, Sylvain Chavanel, Sep Vanmarcke... those aren't usually the type of names that show up for the Leuven omloop.

The crowds responded to it as well. When I was last there two years ago I showed up 15 minutes before the start of the presentation and easily had a first row spot. This time around, there were rows of five people thick lined up around the startzone, and many more on the steps of the city hall which offered a great vantage point. Unable to get anywhere close, I decided to go looking for the team bus area.

The buses were, so it seemed, randomly parked all around town. The Europcar bus was all alone in a street somewhere, same for Garmin. On the one hand, that meant no fans to harass the riders I suppose. On the other hand, that meant no fans. The Fidea-Telenet squad - GP Jef Scherens is always used as cyclocross fitness for the Belgian cx big guns - was parked on a square miles (ok, metres) away, together with the Colba-Superano Ham team. Yes, I'm as confused as you are by that name. But, it gets weirder. This is the back of their bus. 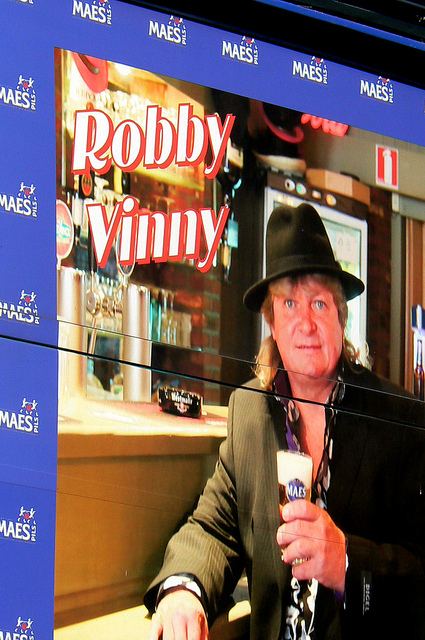 And this is what happens when you YouTube Robby Vinny.

I swear, I don't know either.

But it does remind me of cx season a bit. And while we're on the subject: 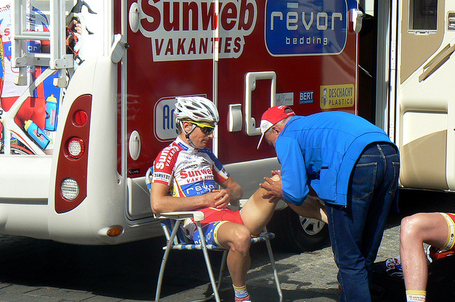 K-Pow! Is he sponsored by Steven De Jongh now? 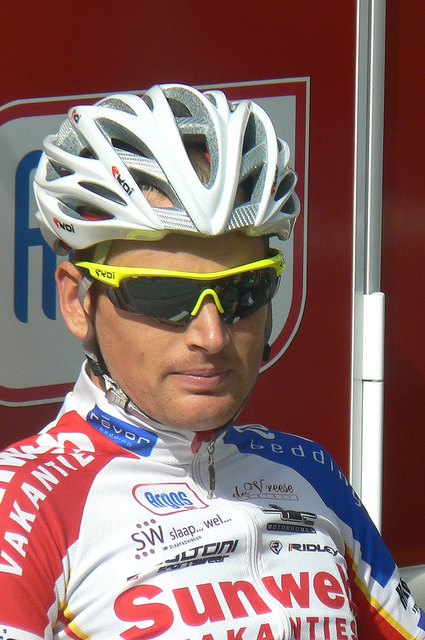 I got so distracted in my search for the OPQS bus that I didn't notice it was time for the race to begin, until a very hurried Tombo speeded past me. Guess I found their bus after all. 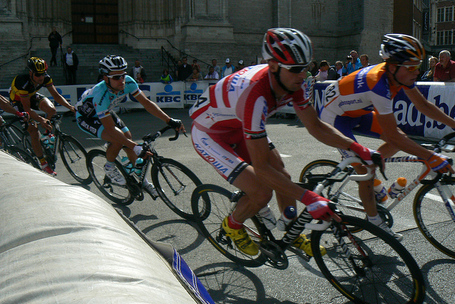 Tombo and Ciolek and other people too. 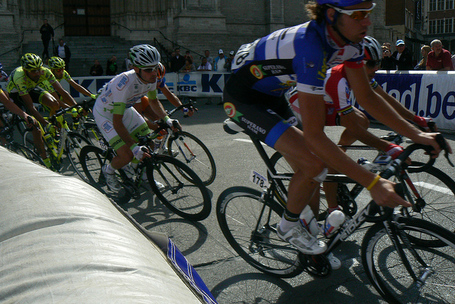 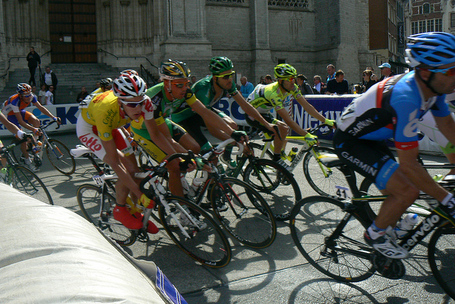 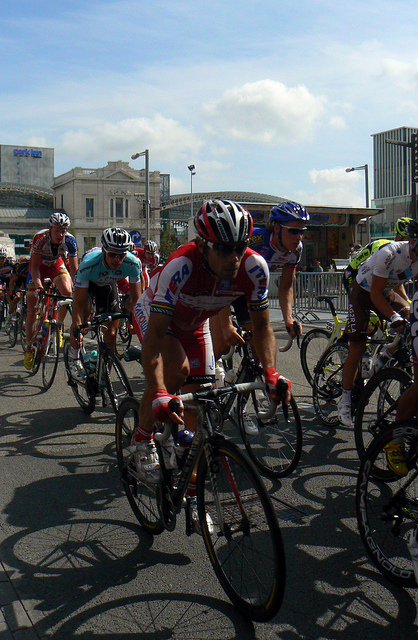 I only stayed for three laps, driven by a need to be back in time to watch the Vuelta, haha. Right by the train station, I watched the peloton go by for lap three. Next to me was a father with two kids, a boy and a girl. The girl was about two or so I think. When some other kids walked by with balloon animals shaped as flowers (so, more like balloon flora technically) she referred to them as 'oemetes' rather than the correct bloemetjes, so the speech wasn't all there yet. I'm not judging her, just trying to get across how young she was.

There was quite a gap between the peloton and the break at this point, about a minute or three I think. She clapped vigorously for the group of escapees, but then got a bit bored. "We can't go just yet, sweetie", her dad told her. "There is one man we still haven't seen yet..."

"Tom! Tom! Tom!', was her enthusiast reply. That is one girl with an excellent upbringing, surely.