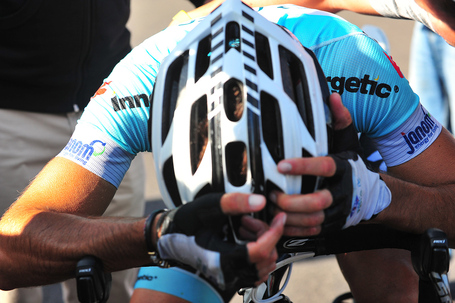 As usual, I lost a week of the Vuelta a Espana to vacation, so forgive me if my senses aren't as sharp... but is this really the awesomest Vuelta we've seen of late? Or even the best grand tour?

Each day I have peeked at the stage chatter, or joined in when I could, and there has been general agreement that the stages, with their constant uphill finishes, have been exciting. The Hobbesian stage formula -- nasty, brutish and short -- has evolved beyond its Giro nurturing to a feature of every grand tour. Even THE Tour. The result is that people like you and me get to turn on our teevees and watch guys go uphill a little bit, almost every day.

And I'm OK with that, basically. But the result is a Vuelta that, in my opinion, is a bit of fool's gold.

Andele a la Flip! [And a poll]

When we talk about "who won the (grand tour)?" we mean the overall GC. There are lots of ways to be entertained, and I am for all of them. But it's probably worth separating out what we're talking about when we say "that was a good race." In this Vuelta, we mean stages. The stages have been great fun. The GC is not.

The GC is locked in to a podium that we can practically carve in stone. Yes, the great Alberto Contador is less than half a minute behind the always-nearly-great Joaquim Rodriguez, and anything can happen on the Bola del Mundo climb now slated to decide the GC. But why would anything happen there that hasn't already happened about a dozen times in this race? Namely, Katusha and Saxo will keep the pace high (with Sky involved to some degree); Contador will attack and crack Valverde, temporarily, and enough to assure that we're really watching a two-man race. But Purito will stay glued to Contador's wheel and dust him on the line. The simple fact is that Rodriguez is in excellent conditioning, and Contador is not. Bert looks good, very good, but he can't make his attacks stick beyond 20 seconds or so. He doesn't have more to throw at Rodriguez. If he did, he wouldn't be the one losing a few seconds in the final 200 meters.

Part of the enjoyment of this race has to be attributed (cough) to the Tour. That was truly one of the least interesting Tours de France we've suffered through since the Lance years, as far as the maillot jaune was concerned. Not to say there wasn't any good racing; au contraire. The Tour never disappoints when it comes to entertainment, on some level. But the main course is the overall victory, and Wiggins' coronation was almost never in doubt.

Compare this month's GC battle to some recent Vueltas. Last year Chris Froome almost upstaged JJ Cobo's upset win with an even more shocking upset of his own, before fading in the final climb. The year before, the overall victory changed hands twice on the way up Bola del Mundo -- as great a conclusion to a grand tour as I personally believe I've seen since the 2005 Giro or the 2007 Tour. Or the 2010 Giro. We've had some good ones lately.

I guess the counterargument to some of these examples is that the overall victory wasn't fought over as much (necessarily) prior to the final stages as this has been. Day-in-and-day-out, there is action. Great stuff. In that regard, the best grand tour could be the 1989 Tour de France, where LeMond and Fignon not only engaged in their famous finish but a see-saw battle along the way. As fans we had our cake and ate it too that year. Maybe by next weekend we will be talking in similar terms, but I don't see it coming.

OK, who's got the counterpoint?