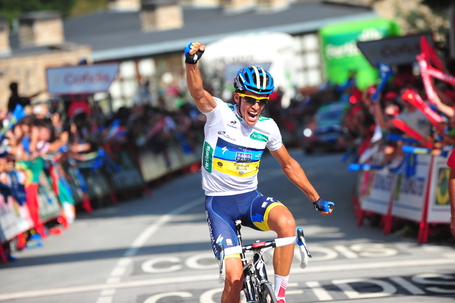 Alberto Contador of Saxo Bank seized control of the Vuelta a España today in dramatic fashion, winning the stage to Fuente De by 2:37 over the reigning Red Jersey, Joaquim Rodriguez of Katusha. Contador, the winningest grand tour rider still drawing a paycheck, employed his powerful Saxo-Tinkoff squad, along with the equally well-staffed Movistar team of Alejandro Valverde, from the second hour of the race to the finish. On a day when the race wasn't expected to change, with a flat stage to a manageable finish, the two teams launched attack after attack against the overall leader until Katusha were exhausted and Rodriguez was isolated. From there, Contador and Valverde escaped Rodriguez' grasp with 80km to go. Contador went solo on the climb, and finished the stage alone, but Valverde leaned heavily on teammates Beñat Intxausti and Nairo Quintana to reel in the returning champion, limiting Contador's advantage to just six seconds on the road.

Some idiot(s) was/were saying the Vuelta was over after Rodriguez defended one summit finish after another, looking better each time. But today was a triumph of tactics over formula, a nod to the greatness of grand tours as three weeks of real racing, and elevated this particular Vuelta into the pantheon of fascinating editions of the last few decades. The final result remains in doubt, with Rodriguez now 2.28 back and Valverde inside of two minutes. If the race reverts back to the three riders going head-to-head, the results are unlikely to change, even on the final Bola del Mundo climb. But Movistar are a strong team and Valverde an aging and crafty champion, with several weapons to fire before the final climb of the final uphill stage. Katusha too are nothing to sneeze at, despite being outgunned in conspiratorial fashion (n.b., that's cycling) today, and Rodriguez may yet be heard from before Madrid. But two champions played cards today, and one champion of a different kind, the brilliant stage and classics rider Rodriguez, saw his grand tour ambitions unravel once again. Results: 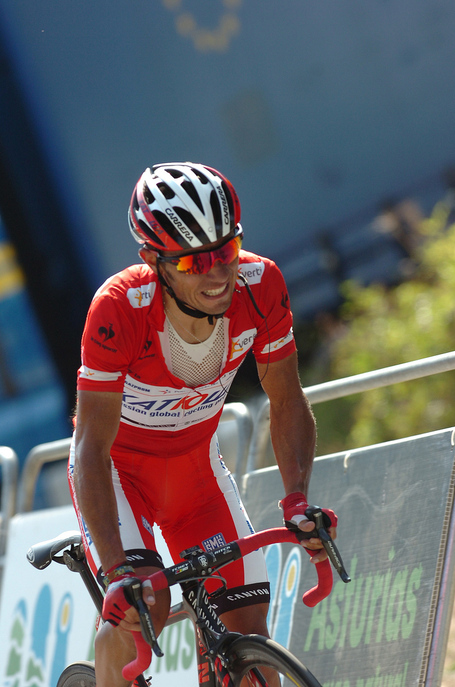