It's the end of the season now, and for those looking to be on their best form for the Worlds there are two vastly different races to choose from to get that last little bit of preparation in your legs. If you want some hills then head south to the Rhone Alps for a week's climbing in the Tour Cycliste Féminin International de l’Ardèche, but if you'd prefer to toughen up your technique with cobbles and echelons, then the Brainwash Ladies Tour (Holland Ladies Tour as was, with a new title sponsor now that Rabobank have taken over their cyclocross team). The fact that this years Worlds are in the Netherlands, but in that hilly bit that also includes the Cauberg has led to a schizophrenic schism in the peloton, with climbers supreme Emma Pooley and Ash Moolman heading to France, while the stars of this year's Fleche Wallonne Evie Stevens and Marianne Vos chose instead to fight it out on the shores of the North Sea.

For information about Ardeche, those with steady hands can try to negotiate the official site, but beware - one slip of the mouse will send you back to the beginning of all those little nested menus. If you can get to the right spot, they publish a single pdf document every day containing all the results. Alternatively let John Cyclopunk do it all for you. The Brainwash website is easier to negotiate, but the weather rather than the geography is likely to dominate. Right up until Sunday's final stage which follows in part the circuit that the Worlds will follow. 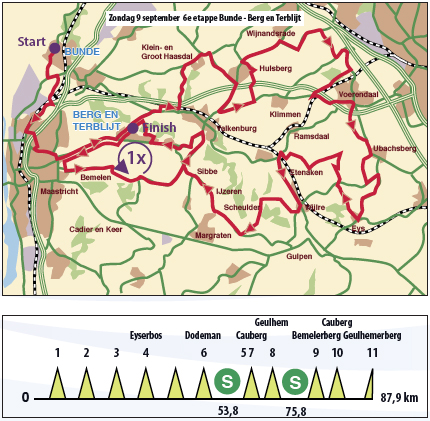 We're unlikely to see any video from France (especially as the webstream of all their local news reports is now georestricted), but something may pop up on one of the Netherlands excellent regional channels.