The Global War: Battle of the Bola

Share All sharing options for: The Global War: Battle of the Bola 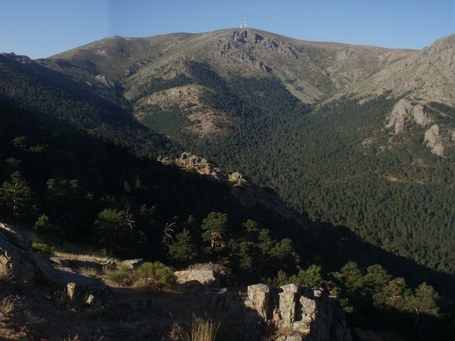 Should I go ahead and declare the Vuelta over, just so we are guaranteed a great stage tomorrow? OK then...

There is no way Alberto Contador will lose his lead in the final stage to the Bola del Mundo. For starters, team tactics are meaningless, so don't look for anything there. Also, final climbs are meaningless because people just match each others' pace, once their teammates are all gone. Really, it's just an uphill time trial, and there is no reason to think any of Contador, Joaquim Rodriguez or Alejandro Valverde is any better than anyone else.

Stage analysis on the flip!

OK, on to the festivities. First off, the Bola del Mundo may be all the rage, but it's not all the stage. There are four other rated climbs to deal with: 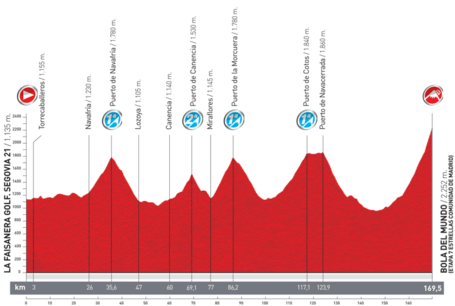 The problem is that the last of them, the Puerto de Cotos, is a 5% non-beast which tops out 52km from the line. So tactically, the race won't be won here. But chess pieces can certainly be in play. Any of the earlier climbs can be ridden hard enough to crack the support riders, and isolate one of these guys. Obviously the tables have turned to the point where instead of the coordinated (ahem!) assault by Saxo-Tinkoff and Movistar on Katusha, this time it'll be Katusha and Movistar ganging up on Saxo. Frankly, I wouldn't even want to try to predict how that will turn out; I'll only say that all three teams combined have lost only a single rider, JJ Rojas-Gil from Movistar, who wouldn't have played a role tomorrow anyway. Movistar and Katusha must surely know they need to use the early climbs to play cards. They surely know that Contador, with protection, will be unbeatable on the Bola del Mundo. So the first few hours of the race should be quite interesting... if these guys still have their legs.

The Puerto de la Morcuera is the only climb rated in the top 300 in Spain among these early tests. Sounds bad... but Spain has a lot of climbs. The Climby-Bike ranking has it as much tougher than the Fuente De climb, a bit tougher than the Puerto de Ancares climb at the end of stage 14, and inferior only to the Lagos de Covadonga, Bola del Mundo and Cuitu Negru climbs from this year's Vuelta. What that all means is... if the two pursuing teams want to make life miserable for Contador and his mates, the terrain is available to do so.

On to the finishing climb. Contador said earlier in the week that he was targeting it as his chance to win the race. That was a clever little feint, given the tactics unleashed less than a day after this quote which practically took the Bola out of play. Maybe. Nevertheless, there will be much to see at the end of tomorrow's stage.

The Bola del Mundo (Spanish for world ball, or globe) only got its name in 1959 when someone parked a TV antenna on top of one of the highest peaks of the Sierra de Guadarrama west of Madrid. On its east slope is the Glacier de la Condesa, a snowdrift which could fit inside one of the smaller crevasses on any of Mount Rainier's actual glaciers. But the point is, it's pretty high up, 2265 meters at the summit, which is just above the finish line.

Nothing too extraordinary, but it does get hard at the end. As we saw in the 2010 Vuelta, the only other time the ascent was used, it's a good place to stage a battle... but if Vincenzo Nibali can hunt you down in the latter portion of this climb, is it really all that hard? It's certainly inferior to the Cuitu Negru climb, which itself came following several smaller climbs to warm up or wear out the legs. In and of itself, the climb won't affect the Vuelta's podium. Not unless there's a lot of tactical work playing out beforehand. Which there should be. So there.

OK, tune in early and often.