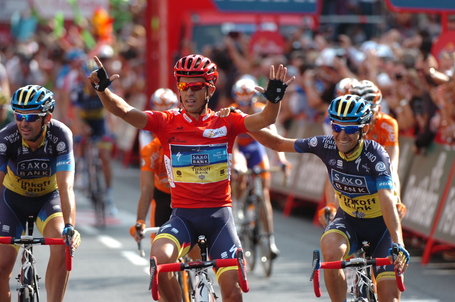 John Degenkolb of Argos Shimano nipped Elia Viviani in Madrid for his fifth stage win of the Vuelta a España, bringing to a conclusion one of the most exciting grant tours in a generation. Saxo-TInkoff star Alberto Contador finished comfortably in the pack to win the Vuelta, his second such success and seventh grand tour victory (by his no-longer-official count), by 1.16 over Movistar's Alejandro Valverde and 1.37 over Katusha's Joaquim Rodriguez.

The stage brought to a close a truly magnificent Vuelta, one marked by big efforts and bigger surprises. The steady diet of moderate uphill finishes drove the race into a predictable, if entertainin, pattern before the teams of Movistar and Saxo-Tinkoff flipped the script and decided the top two places on the podium with a devastating tactical ploy on an unforgettable stage 17, a moderate uphill to Fuente De. Contador rode like a bat out of hell for the last two hours of that race, using his and Valverde's team to isolate overall leader Rodriguez, then forcing a split along with a couple teammates which saw him gain close to two minutes on the group containing his two rivals. From there Contador set off after an intermediate sprint with Paolo Tiralongo and never looked back, trading turns til Tiralongo lost the thread, then soloing home alone. Meanwhile, behind Contador Valverde had ditched Rodriguez, forming a powerful chase with teammates Intxausti and Quintana which clawed almost all of Contador's gap back, and put the to former Vuelta winners over two and a half minutes ahead of Rodriguez on the line. It was a devastating reminder that the riders make the race, not the course, and every day of a grand tour can mean excitement or devilment. This is why overall grand tour leaders on faltering teams don't sleep well at night.

Rodriguez, a dominating rider in stages and in one-day races, suffered another grand tour heartbreak in what must be a truly agonizing season. Rodriguez leads the Podium Cafe World Rankings but remains winless in grand tour general classifications, after losing the Giro d'Italia by 16 seconds to Ryder Hesjedal in the final day's time trial and cracking here on a day when he should have been unchallenged. Adding insult to injury, Valverde finished sixth on today's stage to take the points jersey off Purito's back at the last moment.