Belgian Nats! Sven, Sand and ... Someone Else

Share All sharing options for: Belgian Nats! Sven, Sand and ... Someone Else

It's the elephant in the room, the Real World Championship of Cyclocross. The Madness in Mol. Yep, time to proclaim a new Belgian champion of 'Cross! Cue DJ Carlito!

The Championships of Belgium are nothing if not utterly true to form. I'm not a fount of CX history, but I'd be shocked if the BKs (Belgische Kampioenschaap) were run on any grassy crits lately. It'd be like having the Super Bowl played inside some crappy dome... which is to say, it can happen, but only when we let money ruin everything.

This year's course in Mol, Tom Boonen's hometown (and I'm not saying that -- the name of the municipality is offcially "Mol, Tom Boonen's hometown"), a region of Belgium known for swampy forests. That's not a diss; I grew up in an area surrounded by swampy forests. If Cross had been discovered when I was a kid, I'd have had an even better childhood, and probably be carrying around pieces of birch bark embedded in my shoulder. What I know of swampy forests is this: they look like nothing much from overhead, but up close, no two meters are alike.

And so we have the Mol course, at a park called Silver Lake:* full of surprises, places to sink in up to your bottom bracket, and of course sand. Earlier in the week Sporza posted videos of sand trucks rolling onto the course and dumping their payload. If you can't bring Mohammad (Nys? Albert?) to the Mountain (Koksijde), then you must bring the mountain to Mohammad. So now, the course looks like this: 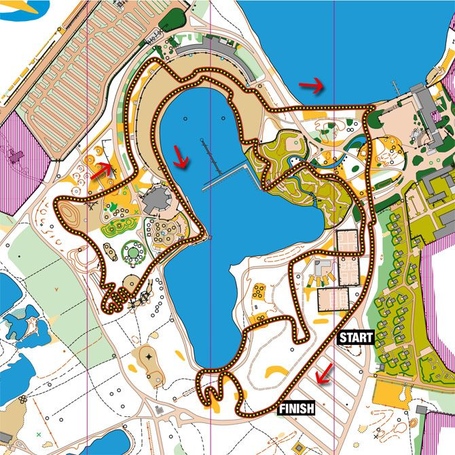 OK, so I exaggerate a bit -- the sand section is along the top arch of the course, and functions as a beach the rest of its time. So the sand augmentations just softened things up a bit more than usual, or made them look prettier for the cameras. Whether this is a natural beach... doesn't matter; it's a beach now. And even if it wasn't, this would be a pretty tough course. Watch Klaas Vantournout sample some of the forested sections, which contain a mix of technical turns and steep, messy descents that would be classified as landslides if they went on much longer. See more of the course under construction at the official site. [And while you're there, don't stay. They haven't even managed a startlist yet.]

In other words, it'll be another hard day in the saddle. Which brings me to picking a winner: Niels Albert. Albert hasn't won in the new year yet, but Baal came after a couple nice wins, and Rome wasn't his day. Meanwhile, the bigger story is that Sven Nys will be in attendance... but he won't win. He turned up ill at the start of the year, so much so that he couldn't race Baal, a/k/a GP Sven Nys. He only recently decided to try for the BKs. The odds of him being at his best aren't good.

Is this the start of another January fade for Nys? It's certainly true that nobody, not even the Great Master, can be in top form all season long, especially now that the 'Cross season lasts a good five months. For Nys, who is under pressure from an adoring fan base to win everything in sight, starting in September (or maybe October, if need be), the season often catches up to him in January, and it's no coincidence that he's easily the greatest rider anyone can think of in the discipline, yet he hasn't won a rainbow jersey since 2006. Check out his palmares. The pattern is clear: he wins occasionally in January. He wins a ton in December... and November... and October.

The flavor of the month so far has been Kevin Pauwels, but this is a hard course, much more to the liking of the World Champion Albert, and the difference between Albert and Pauwels of late isn't much. So I'll go the safe route and pick Albert to gain a new jersey... just in time to replace the white won he's going to lose in Louisville.

* Silvermeer, a/k/a Silver Lake, is a perfect name as far as any Seattle 'crosser is concerned. It's extremely similar to one of the events on our calendar, the SCX Silver Lake GP. One of my two favorites on the year, and home to most of my crashes.