Summing up a traumatic year for the cornerstone of Dutch cycling and looking forward toward a decisive and uncertain year for Blanco Pro Cycling, the descendants of the once mighty Rabobank team that lost it's title sponsor and entire foundation at the end of the season. 2013 will show if this franchise will live on under a new name or if this is the end for the Dutch powerhouse.

I don't think anyone expected to be sitting after the 2012 season writing the last ever team capsule on Rabobank, one of the biggest and longest running sponsorships in cycling. Nevertheless this is where we are, whether it is because of the aftermath of the Armstrong debacle or if there were some other underlying reasons for the Rabobank withdrawal. So this will be the last look at Rabobank, an institution in modern cycling as well as a sneak peek at Blanco, the blandly clothed limbo-squad that hopefully will be the seed to a new era on the route to dutch hegemony.

What We Thought Going In

"Upward. I am more convinced than ever that Rabobank are on the verge of something far greater than poor, miserable Scarlett could have accomplished, tedious sequel or no. "
Breschel is as likely as Gesink to rebound from his health woes.....If so, supplementing the existing Rabo squad with a rampaging Dane, precisely what they need, should take them from "deep and strong" to "dangerous"

Well, lets call it more of a sideways slide, shall we. At the end of the day Rabo didn't really make any major leaps. Breschel lost more time in injury limbo, exacerbated by some odd schedule choices (No Roubaix?! Point me in the direction of the nearest dutch person I can hold accountable for this idiocy so I can administer a good old fashioned cockpunching) and never really contributed anything in his two years at Rabo. Boom looked ok at Roubaix and did the job at Eneco but he didn't exactly turn into a world-beater. Gesink came back from a bad injury as well as anyone could hope but 2012 didn't turn out to be his breakthrough year either. Guys like Mollema, Slagter and Kruijswijk had slightly more anonymous seasons than fans had hoped but talent development is rarely linear so we might see a very different picture in 2013.

With stealthy old Denis Menchov gone, Luis Leon Sanchez turned out to be the team's golden foreigner bringing in some much needed results. After a lackluster first year at Rabo he came back with a vengeance in 2012. Arguably the greatest bikeracer in today's peloton, Sanchez has a knack for using smarts and active tactics to win races over faster and stronger (but less clever) opponents and doing so he got the most high-profile wins for Rabobank this year.

All in all it's a bit sad really to have this as the farewell season for Rabobank. Not that it was a terrible season by any means, it was just a bit bland and anonymous. There really weren't many shining moments and I suppose the critics will point out that this was a little symptomatic of a team that regularly came off as a bit underachieving when compared to the talentmass, resources and expectations. The team has always come off as very dutch to me though, not flamboyant but with a strong underlying sense of quality and functionality in everything it did. They would have deserved a signature win in their final season but with any luck we may perhaps not come to think of it as a final season afterall if the team manages to morph into a new sponsorship as it has done in the past. 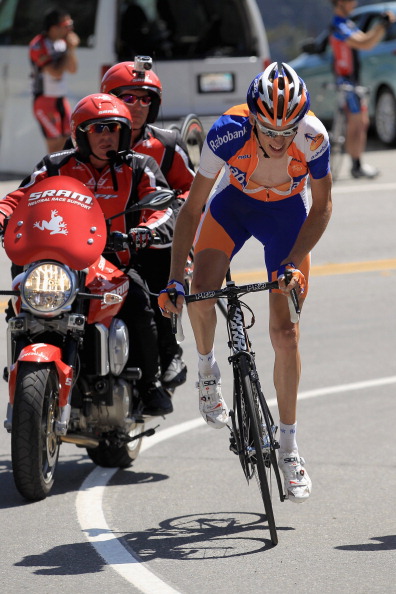 1. Gesink wins the Tour of California

With Gesink coming into his prime years expectations on him are really a step above wins in races of California's calibre but with him coming back from major injury (broken femur) his strong effort on Mt Baldy to clinch the win was a very welcome step on the way.

Lars Boom left cross to achieve big things on the road. Very big things. We know because we were there, we did the hype, we got the Tshirt. And while he has done some splendid results it hasn't really been obvious that he would be the all-conquering classics-hero we all expected. With that in mind it was good to see him performing to his abilities in Roubaix and the EnecoTour. At Roubaix his effort came in the wake of the all-crushing Boonen-fest but it was still confirmation that he will be a factor in the monuments. Winning Eneco , with the new finish in Geraardsbergen, was perhaps even more impressive.

3. Wilco Kelderman's Top 10 in the Dauphiné

Not that Rabo were lacking in stageracing talents before but supertalent Wilco Kelderman mixing it up with the bigs in one of the most prestigeous races of the year was a great result for the team. Keeping in mind that this was his rookie-season it's hard not to crank up the ole' hype-machine once again. The dream of hegemony lives!

1. All-in for the Tour backfires

Eyebrows were raised when Rabo sent a decidedly second rate team, mainly with sprint-ambitions, to the Giro while saving all their GC guns for the Tour. With so many GC-riders available it seemed a waste to save them all for the TdF when the team and some of them could clearly benefit from going for some results in the Giro instead. Predictably it all went pearshaped as well as the Giro stagehunters came up empty-handed and anonymous while all the ambitions of the overstacked Tour-team came crashing down in the same crash that wiped out the Garmin squad. I'm assuming there's some dutch equivalent of the old "eggs in one basket" proverb or if there wasn't, maybe there is now?

Mollema 10th, Martens 33rd, Gesink 52nd......... Not quite the numbers the home-team were looking for in the big race of the year and yet the kind of numbers they have grown accustomed to. Will the exit of Rabobank perhaps remove the curse the team has suffered from these last years in Limburg?

While trying to make this about the happenings on the road it is impossible to look past the massive disappointment of the news that came abruptly in October. It was such a blow and even as we can't really see yet what the outcome of it all will be, the loss of the perhaps biggest and most important team-sponsor in cycling merits as the worst news of the year. And that is in a year of some pretty crappy news.

.......Which leads us to a 2013 of uncertainty for a team that has been all about stability for a number of years now. With it's major investments across the board the bank has created a place for dutch talents to develop over a longer period without the immediate pressures to produce results that are in place pretty much everywhere else in pro-cycling. Critics have even pointed to this as a negative in some cases calling the setup an over-comfy haven for talents who grow fat and lazy with too little demands for them to perform. I'm pretty sure there's some truth to both points of view but sometimes some conceitedness in some is a low price to pay for a healthy environment for the many.

With all this in mind 2013 wil be a very different season. Suddenly the Blanco team will be out from day one in search of new sponsorship and results are hard currency. Gesink has already motivated his choice to focus on the Giro with wanting to get on the scoreboard early to help secure the teams future. Logically the spring classics will also be vital in establishing a winning trend for the team. It should be an interesting start of the year to say the least. A major factor in all this is the fact that Rabo had already initiated a big reform program before the bank stepped away. The focus is on dropping some of the god old boys with the classic old school approach to training and racing and establishing a new management-structure inspired by the "modern" anglo teams like Sky and Garmin. More performance-coaches in house to get a more scientific, structured training (and also reducing the exposure of their riders to various doctors, trainers and "preparatores"with all the fun stuff that comes along with that) is part of the new deal. This, along with the "us against the world"-attitude that seems to emanate from the riders since the loss of the sponsor was announced, could lead us to see a very different team in 2012. And they are going to need it. For as fortunate as they have been to have Rabo honor the commitments they made, giving the team some respite, finding new sponsorship on the level of what Rabo offered will not be an easy task in the current environment. Especially if they can't establish a strong new management to replace the people that exited with the bank.

With new additions like Vanmarcke and LP Nordhaug you could easily see them racking up results all through April if they manage to integrate their ambitions with guys like Boom and Mollema. Boom already sounds a lot less abrasive when it comes to Sep than he did with Breschel so that's a good sign. A double threat on the cobbles is always going to be in his favor even if he doesn't necessarily recognize it himself.

To secure that they get the most (anything?) out of their Renshaw signing they have strengthened the sprind squad too with guys like Wagner and Tanner and with any luck Renshaw steps up. If not, the role as "great leadout" looks like his ticket to fame and fortune once more. As for tactics, let's just say they're starting with a blanco sheet and leave it at that. Far be it from us to get into a discussion about the lack of a certain je ne sais quoi in their decision-making in the past. Anyway I think we are all hoping the Blanco boys and their management manage to pull off a strong season and secure a new sponsor. Dutch cycling, and cycling as a whole would be poorer for it if they didn't.