Part III of three parts... that can only mean we're nearing the end of cyclocross season. Oh, the humanity!

Share All sharing options for: The final chapter: the 2012-2013 cyclocross calendar, part III 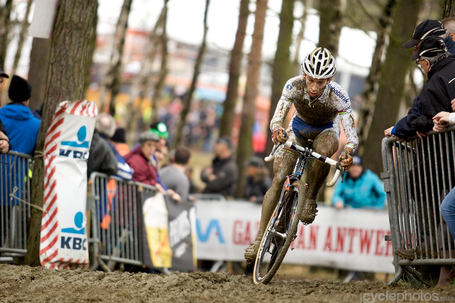 Admission: I really like google gnomed English. So, when I run across websites - for world cup races no less - with texts like "seize the chance TO LIVE the most ENTERTAINING EVENT in ONE of the most CHARMING CITY in the WORLD!" I am smitten. Even if the rest of the website is Italian and completely counter-intuitive. As for the course itself - it's very squiggly. Lots of turning. Bad news: it's flat and grassland. Think Igorre or Hoogerheide. Sigh. Another part seems to be on flattened race circuit circus Maximus sand. Let's not judge til we see the actual race, but from the looks of it it'll be fast and entirely unspectacular. Worse news: no rain and sunshine in Rome. Sigh. But we'll always have the gnomes.

The race in Hoogerheide is the final World Cup leg of the season. A quick recap says it's flat, fast and boring as hell. Good news though, the geniuses at the UCI have selected Hoogerheide to be the world champs in 2014! Yeah. That's not really good news, I know. So we, I don't know, hope for torrential conditions? Rain and the likes? We'll need it.

I like the Krawatencross in Lille. It's a fun race, even though it's maybe nothing special to some people. They race the banks of the lake, close enough to the water to almost justify pedaloes. They then turn into the forest, which is also fun. And last year it snowed, which was triple fun. I know this has been a winter softer than a lovestruck teddybear, but there's still hope. Let's live on hope! Plus, it'll be the first time the new world champions get to show off their stripes. 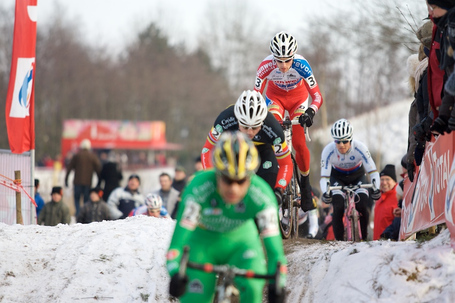 They should really save some of the crazy races for the end of the season. Cause Hoogstraten is another normal one with grassland and hills, you know the drill. It's not entirely uninteresting though, the hills are steep enough to invite attacks on them, which is good. It could do with just a smidgeon more madness.

Middelkerke is the final Superprestige race of the series, so today is the day we find out if Nys wins his twelfth - yes, 12th - SP ever or if someone else gets to grab their first. Technically, Bart Wellens has won it before (in 03-04), but somehow I don't see him repeating that feat. Anyway. Middelkerke is also known as the Noordzeecross, and the Noordzee is the north sea. Unfortunately we don't race in the dunes though, but in a sportpark which goes by the name of 'the crocodiele' (spelling error included). There are some sand sections though, so that's good.

Oh, and if you hang around the Vier dudes usually follow up the final race with a SP round-up.

Can't find too much info on this one. I'm not even sure it's actually happening, the website still refers to 2012. A shame, because it's a really fun one. How about we see where we're at near the end of February, ok?

Oostmalle. Sluitingsprijs - closing gp. I think I'm gonna cry a little. But at least they made the transition easy by scheduling the final cx race in the first cobbleweekend. Good folks. Anyway. On to Oostmalle, the final leg of the BPost (formerly GVA) series. If you click the map link, you see lots of little drawn trees (and a few giant tv's), so let's state that this is a forest race. The beige parts is Kempensand, which is fairly light and lies on a hard surface so it's not too difficult to ride on.