Last week we had the announcement of the UCI women's road calendar for 2014, and it got me thinking - how does it compare to 2013? And how did 2013's calendar change over the course of the year? This is part of my series on how the women's cycling calendar has been changing - I'll be writing some conclusions from this year's research in the next few weeks - and of course, let's have lots of conversation in the comments!

Share All sharing options for: The women's UCI road calendar - how 2014 and 2013 compare 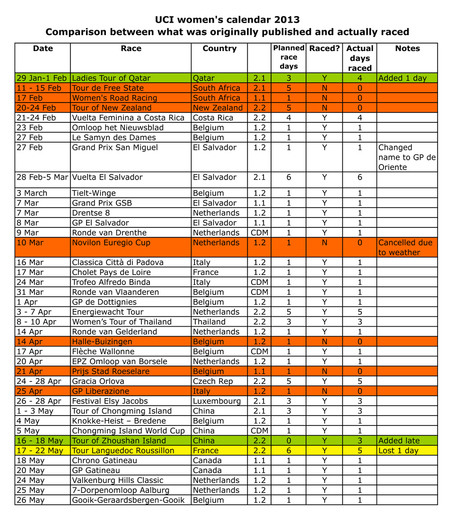 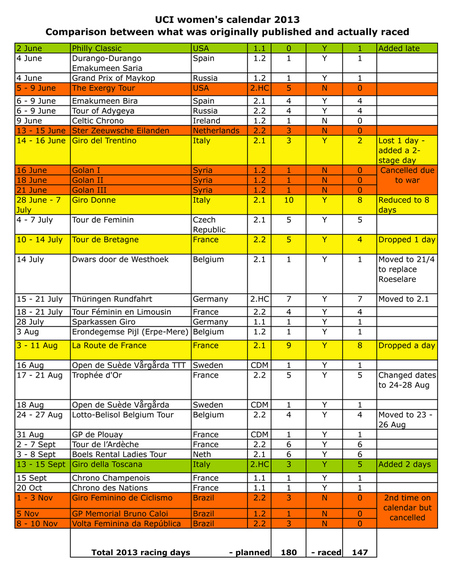 Hopefully the colour-coding makes sense - red is for cancelled races, yellow is for races that reduced, and green is for ones that appeared or grew since September last year.  It is going purely on racing days - so, for example, the Giro Toscana ended in debacle, and we still don't know if the UCI will count the points for the final stage yet, so I've left it as green, based purely on the numbers.

It demonstrates why we always start any conversations about the women's road calendar with caveats. The calendar dropped from 180 planned racing days - 43 days races and 32 stage races - to 147, losing 6 stages races and 9 day races, losing 18% of the original calendar.

The reasons behind those race losses differ, of course.  The Novilon Euregio Cup is the third women's race in the Drenthe cycling festival, which includes the Ronde van Drenthe World Cup, and it was all set to go ahead, with riders and teams out there waiting, but the weather was so appalling it had to be cancelled(remember the frozen eyeball epidemic this spring?).  We can't blame anyone for that!  And given the state of civil war in Syria, it's no surprise they were cancelled too.   But most of the race losses come down to financial issues, and sponsors disappearing from the sport, which is worrying for the future.

There was some good news in there too, or at least some mitigations to race losses - when the Giro Trentino dropped to two days from three, they turned one of the days into a two-stage day, so there were still three stages of racing.  And the Giro Donne, the only women's Grand Tour, had looked like it would disappear completely, after the organisers had to deal with a 2012 sponsor refusing to pay, so the fact that it happened at all, even if it was reduced, was a good thing.

I have made an executive decision that even though the Golan races are on the calendar, it's very optimistic to assume they'll happen, so I've taken them off the calendar already.  And given that the Brazilian races have been put on the calendar for at least three years, but have never actually run, I'm not including them in my analysis for 2014.  This may sound arbitrary, but I can't imagine any teams are planning for them either - and it will look better for the UCI if we assume they're not starting than if we are talking about 6 races and 10 racing days disappearing from the calendar this time next year.  Personally, I'd rather they left them off the calendar until they had some serious guarantees they'd go ahead, but that's me - feel free to disagree!

Here's how the calendars compare, looking at races that happened in 2013 and races planned for 2014: 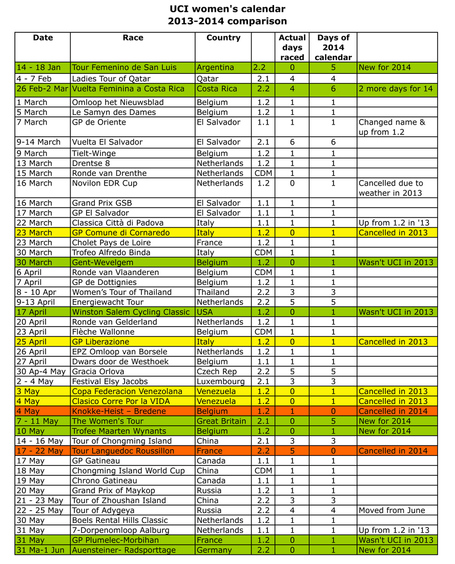 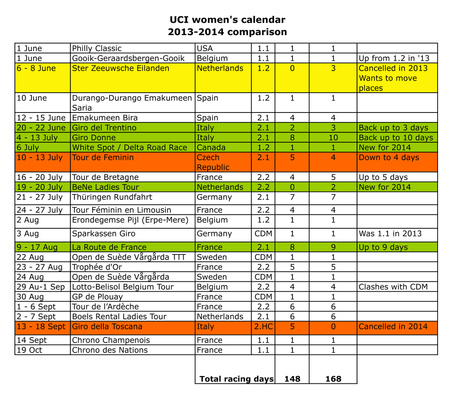 These are colour-coded differently - red for races that took place in 2013 but aren't happening, or are shorter in 2014, green for races new on the UCI calendar, or increasing their days, and yellow is for races to watch out for - those that were on the calendar but didn't happen last year.  They're not necessarily bad races - I love the Ster Zeeuwsche Eilanden, for example, which was cancelled last year after their local Rabobank pulled funding, it seems like it's got an excellent organising committee, so I am optimistic about it (if anyone knows Dutch sponsors, ask them to send extra money their way!).

This looks like good news.  Yes, we've lost two stage races, but given the chaos around the Tour de Languedoc Roussillon and the Giro Toscana, I wouldn't want them on the UCI calendar without some serious guarantees for change.  Of the new races, some, like the Women's Tour (of Britain, but we're not allowed to call it that) are brand-new, and others are races that have happened in the past, but are increasing their status.  I like both approaches.  Sweetspot, who run the Women's Tour, have run the Tour of Britain and the British Tour Series of day races for many years, so they're obviously experienced and investing a lot into the race, and the Trofee Maarten Wynants and Ronde van Overijssel have been men's races (in RvO's case for 63 editions!) so seeing them add women's races is great.  And having seen so many races come and go, seeing races like GP de Plumelec-Morbihan and White Spot/Delta having proved they can run well before getting UCI status feels like they're more likely to be stable.

So if this calendar turns out to be what's raced, this is really good news - 20 more racing days in 2014 than there were in 2013!  And if you believe the Golan and Brazilian races will run, 30 more next year.  It's also especially good to see the increase in German races, given how doping on the men's side seriously impacted on German cycling.  Sparkassen Giro becoming a World Cup, and taking the World Cup back to nine races, is really good news, as is the new women's stage race - while as a Brit, it's been a little bit embarrassing that while Nicole Cooke and Emma Pooley were dominating the women's peloton, we couldn't get to see them ride against the best in the world in the UK, so I'm already over-excited about the Women's Tour.

It's good for North American racing that there are more UCI races in the USA and Canada - but I still wish that the UCI could work with the amazing USA stage races and the vibrant Australian scene, to see if there are ways to get more on the calendar, so their great domestic riders can get UCI points too (I've said this before, but one thing they could do is to add a new category that recognises races with crit stages.  I know not everyone likes a lot of crits in a stage race, but crits are easier and cheaper to organise, and great for spectators - and are a fixture of Aussie and USA racing - and having a new category that has fewer UCI points but allows more flexibility for organisers to choose which teams can race there might make it more attractive for existing races to spend the money to upgrade.  I'm very interested in the pros and cons for races going UCI, and what incentives or solutions could be brought in, because there are fantastic racing scenes out there that I think deserve recognition and status for riders).

Speaking of Australia, it is sad that we still have no UCI races in Africa and Australasia, and I hope that changes (here's to the Tour Down Under adding a women's race!) - and there are still a lot of countries that maybe could be targeted to develop races (for example, there have been four UCI-level Swiss races that have disappeared from the calendar since 2006, and the UCI are based in Switzerland...), but it's still overall good news.  And if any races are thinking about upgrading to UCI status, or starting something new for 2014, there's still a lot of space on the calendar....

Visual view of the 2014 calendar

If you want to see that in more detail, the Excel spreadsheet is here: Women's UCI calendar view 2014

The first interesting thing is that a lot of races have been put back a week (I'm guessing because Easter is three weeks later this year?) and the second interesting thing is the gaps and the clashes.  While there are more racing days on the calendar, it's important to remember that teams and riders can't race them all.

I don't think it's necessarily a bad thing when races clash (if there's a 2.2 stage race at the same time as a 2.1, for example, it can give a chance to the smaller teams and developing riders to win and shine, rather than just survive as the big teams burn up the roads - and when there's a hilly race on at the same time as a sprinty race, it offers more opportunities for domestiques to race), but there are two clashes that I think are a real shame - the European u23 championships clashing with the Giro Rosa AND the Czech Tour de Feminin, so young riders have a hard choice to make - and that overlap between the Lotto Belisol Belgium Tour and the GP de Plouay World Cup and then no break between Lotto and the Boels Rental Ladies Tour.  Both Lotto and Boels are flat races, will sprint teams really want to go straight from one to another? I'm guessing the Lotto Tour will be the loser here.

BUT!  There's a lot of space on the calendar for new races - especially new stage races in May and June.  I don't know if that September slot left by Toscana will be filled - especially with the Worlds in the USA in 2015, and riders wanting to get out there with time to beat the jet lag.  But looking at the calendar, it seems like it's all about the opportunities.  Will we see races expand?  I'm feeling positive right now!

Tell me what you think about all this in the comments - and I'll be back in the next few weeks with more analysis of how the women's calendar has changed over time, and some conclusions.

If you want to use any of this information, please make sure you credit it back to me and Podium Café, and don't reproduce it without asking first!