CX Sunday: Everyone Into the Pit!

SuperPrestige heads to Zonhoven and its legendary stadium of sand.

Share All sharing options for: CX Sunday: Everyone Into the Pit!

Out of Oudenaarde's topographical frying pan and into the topical fire! Yes, it's Zonhoven, the goofiest locale on the big-time Cyclocross circuit, a veritable sand-pit's worth of fun. Trust me, I have kids, sand pits are fun.

Holy fuckballs - Koppenbergcross on Friday and then Zonhoven on Sunday - that is one awesome weekend. Zonhoven is - like Koppenberg - one of the highlights of the season. No cobbles this time, but sandpits. This is what it looks like during summertime (picture by me):

During the Zonhoven Superprestige, they send people down those hills. People on bikes. Down steep hills made of loose beach sand. Result: mayhem. Entertainment factor: sky-high.

Her original report included a link to a course video, which you can watch, but it tells almost nothing of the true story. From this overhead view it looks flat, straight and dull. In reality, it's sorta flat in a general sense but with more than enough little rollers... plus an enormous sand pit that they criss-cross a few times.

Backing up, the Zonhoven course happens on a nature preserve known as the Teut, in a part of town also called Molenheide (something about an ancient estate). The area is a pine forest underlain by sand, not unlike Cape Cod, or a few million other places with poor topsoil. De Teut was a military training ground for a while, which may or may not explain the giant pit of sand, but in any event the pit has enabled some interesting archaeological finds. And on Sunday, the pit will also consist of tens of thousands of spectators, because whatever you think of this Limburgische wonder of a race course, it makes for an excellent stadium atmosphere.

Fun fact! The Treaty of Zonhoven was signed here in 1833, forever committing the Netherlands, Belgium and England to recognition of the Schelde and Meuse Rivers as free and open for navigational purposes. Of course, forever doesn't mean what you might think, but at least it helped settle a state of war between the Belgians and Dutch.

For those scoring at home, the major features of the course include a long, pretty steep sand descent, followed by a mud/sand run-up. After maybe 30 seconds in those trees, the riders pitch down that sand again, followed immediately by another runup. After about a minute of relative sanity (soft and boggy) there's anasty u-turn on a slight descent in still more deep sand. Then a long, slow romp through the rolling terrain before starting over again. 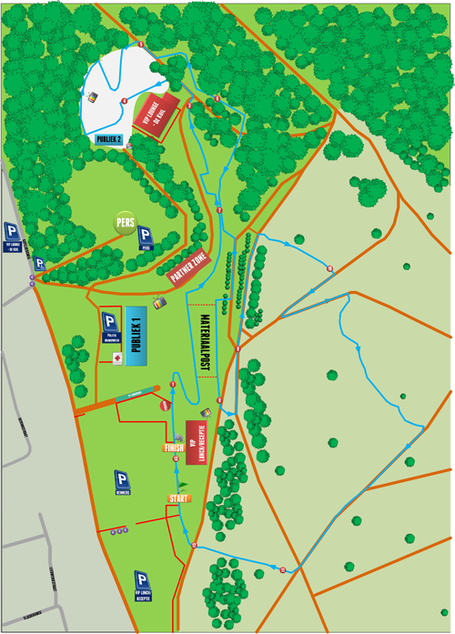 On balance, it's a hard course because it's so soft. And it's a hoot because... because... well, watch the first ten seconds of this video:

Sand is fantastic. An hour or two after this event, I will be rolling through my own sandy hell, and I will do my best to remember all the tips -- lean way back, try to get in a big gear if you have momentum, but be ready to spin up a small gear if you don't, and, well, don't take yourself too seriously. But then I won't have a 20% downhill pitch to navigate, or those sneaky bumps, or frankly the depth of that soft sandy mess. In the Northwest, our sand is fine and packs down nicely in the rain. And it always rains.

Anyway, watch the rest of that video for a good sense of the course, in all its subtle beauty.

The Pit has only been a regular occurrence in the CX world since 2005, after a 40-year hiatus, and Sven Nys and Niels Albert own eleven of the 24 podium places, including six of eight wins. Zdenek Stybar and Bart Wellens own the other two victories, and neither will be defending those palmares Sunday. [Wellens is racing but not very well, one guesses.]

Klaas Vantournout has been pretty good in the sand (two 2nd placings) in the past, and comes in holding the lead in the Superprestige series, which awards 15 points to the winner, 14 to second, and so on down to a single point for the 15th finisher. Nys, Meeusen, Lars van der Haar (42" back in Zonhoven last year) and Albert round out the top five. With Meeusen's win today and van der Haar's excellence on the World Cup circuit, we are looking at an incredibly competitive top slate of riders, tossing an improving Kevin Pauwels (2nd today) into the hopper as well. And don't sleep on a strong Philipp Walsleben, or Martin Bina, or Radomir Simunek, Bart Aernouts, etc.

Full startlist for all categories HERE.

With any luck, we'll get an even more interesting race than last year's two-man classic, where Albert and Nys traded attacks on the last lap, with Nys sneaking past Albert in the closing minute after Albert had outfoxed Nys in the Pit. Seriously, scroll up and watch the end of that video.

On the Women's side, Zonhoven is entering its third year of competition, with Sanne Cant taking last year's event and Sanne van Paassen the year before. This definitively proves that only people named Sanne can win here. Look for Helen "Sanne" Wyman to further prove this point, though Cant was hot on her heels today in the KoppenbergCross and Nikki Harris has put up a fight most weeks too. Sorry, women's event is off this year.

Mike Teunissen and Mathieu van der Poel continue their duel at the U23 level, one that looks more like a coronation of young vdP. Enjoy!