Cross-lovers continue to fatten up on Belgian sweet treats this weekend, as we head out to two more regular (if not overwhelmingly awesome) venues...

The race takes place around the municipal swimming pool, and ever since its inception I've been hoping that they include the big yellow slide in the race rather than just ride a big loop around it. Really, I'd make the best cx races. This may not be the most interesting one on the calendar - but the organisers try to add as many obstacles as possible and really there's something fun about watching the pros ride up that hill that seemed so big when you were six, watch them skirt the pond on the wrong side if they're trying to find the best make-out spot (they probably aren't). Also, insider hint: the plants by the tennis courts right behind where they exit the pool area contain itching powder and can be used to distract competitors.

Here's what the course looks like when the weather doesn't cooperate (dry and sunny):

Boo! More of the same this year. Oh well... it's a very flowy course, which favors the anti-Nys crowd, though the logs are inspired and there's something to be said for setting the world record for scaffold bridges. Also sand. It's entertaining, and not terribly hard, which means the last two laps should be a hoot. Oh and by anti-Nys, I mean that he won it last year, but not the previous two years (Pauwels). That's about as unfavorable as courses get toward de Sven. 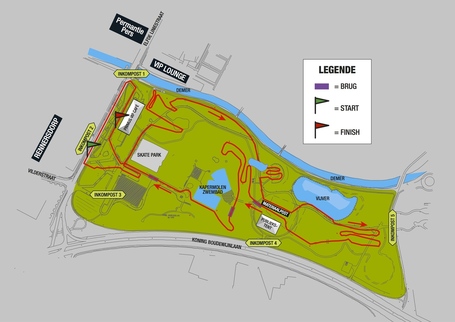 Startlist here. Quite a full day of racing, including Juniors, Women, Nieuwelingen (kiddies?), U23 and Elite men. Wout Van Aert and Mathieu van der Poel renew their hostilities. Nys leads the elites by 45" in the time-based series standings (I know), with Klaassy Klaas at 1.13. Might see that gap shrink a bit, who knows?

A bit of a Jekyll and Hyde, this one. One the one hand there's long straight stretches and more asphalt than seems necessary in a cross race; on the other hand there's twisty turny foresty bits which are really quite fun. The overall interestingness depends largely on a: what mood the peloton is in and b: what mood the weather-gods are in. Hard to predict how much fun it'll end up being.

Personally I love these wooded courses. They always kill me in terms of my riding them, but whatever. I have a certain Stockholm Syndrome tendency when it comes to CX courses, and this is no exception. Despite tgsgirl's tempered expectations, I don't see how this course isn't hard on Sunday. Once the forest gets wet, this time of year, it doesn't really dry out, so the lack of rain over the weekend won't spare the riders their share of mud. It just won't be as deep and soft.

To wit: Nys kills this course, winning seven of the last nine editions. Nikki Harris, Sanne van Paassen and Katie Compton have taken the last six editions on the women's side. Helen Wyman and Sanne Cant are the only usual suspects on the startlist, however, while the fields are predictably loaded for the men and the U23s. Long day of racing... kids, Juniors, etc.

oooohkaaaay. Sorta looks like a wiring project. Nys and Albert are head-to-head (45 to 43 points) in the SuperPrestige comp, with Vantournout a bit further back. But that shouldn't dissuade the Walslebens and van der Haars from seeing if they can up the ante here.