The new Ronde van Vlaanderen course was revealed today. And it's different. Don't get too excited, the Muur isn't back. We´ll have to wait until 2015 for a chance at that since then the deal with Oudenaarde to host the finish has run out and there is an opening for a re-introduction of the Muur van Geraardsbergen. But nevertheless, it looks like a clever tweak of the much debated 2012-2013 course.

Share All sharing options for: Ronde course Makeover for 2014

So this is what we have in store for Sunday April 6 next year. 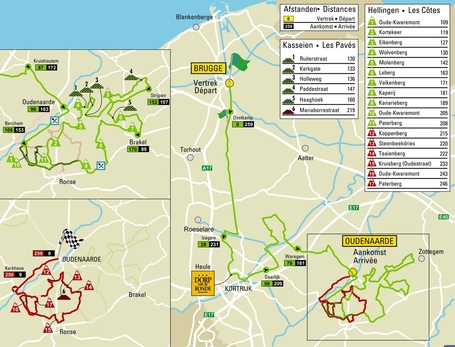 Basically they've re-introduced Oude Kwaremont early on as the opening salvo in the hellingen-section. Then they've reined in the crit-laps at the end so that we only get two passages of the Kwaremont/Paterberg loop instead of three. Between the two passages they do the long loop from last year including Steenbeekdries and most importantly Koppenberg which now comes at a later and much more crucial point in the finale.

We'll do much more detailed analysis later but at a first glimpse this looks like an alteration that opens up a few more possible scenarios than the triple OudeKw/Paterberg combo which made the deciding moment fairly predictable and static. C'mon, is it April yet?