On Saturday we reach the mayhem of the Koksijde World CUp, and though there won't be dunes in Sunday's Gieten Superprestige race, I hear the corners get pretty sandy too.

Share All sharing options for: Weekend CX: It's a sand filled party!

When I was growing up (in cyclocross), one of my first memories was not the thick, dark Belgian mud caking Sven Nys, Lars Boom, and Niels Albert. Instead, it was the seemingly inane course through the tall dunes at Koksijde. How were people supposed to pedal their bikes through that? It seemed like "normal" sand pits were hard enough to navigate. And when I started racing cross years later and realized how difficult sand really was, it became even crazier.

The back end of Vervecken's bike swerved back and forth as he hopped from rut to rut, a mix of half art and half manhandling and brawn keeping him moving forward. The sand's inexorable pull tugged at riders and forced them off their bikes for running, oh so much running. It seemed less race more madhouse, and even after years of watching it seems the same. Koksijde is one of my favorite weekends of the year, and a staple in the sport, having hosted a race since 1969 and becoming an almost permanent feature on the cyclocross World Cup calendar. In 2012, it hosted a World Championships where Niels Albert won and the Belgians took the top seven spots in a ludicrous show of mastery of one of cyclocross' most challenging features.

This Saturday, we return to the Dunes for the third stop of the World Cup. And on Sunday, there is a race too, the Superprestige round in Gieten, but even if the course has been changed up for the better (it seems so), it will be hard pressed to gain a third of the attention as Saturday. But without further ado, the details.

There's plenty good things in life. A hot espresso in a warm bed on a cold morning. Inside jokes of which you can only remember the punchline. Pesto. Beating your own best time's ass. Finding forgotten money in your jeans pocket. Hugs. And Koksijde cross. Koksijde - just for giggles: it's pronounced cock-say-duh - is by the sea, and by the sea you find dunes. Dunes are horrible to walk on and even more horrible to bike through and because really, a big part of cx is enjoying watching others do what you judge to be completely bonkers, Koksijde rules. This race rarely disappoints, but last year was incredible especially. If 2013 manages to kick 2012's ass, it'll be nothing short of spectacular.

Details, details, get your details here.

You really need to start getting pumped up. I suggest watching last year's thrilling race at least once per day between now and Saturday.

The weather looks pretty tame - fog and some moderate wind - but that's okay because the course is anything but, and we don't *really* need mud on the non-sandy parts to make things interesting. 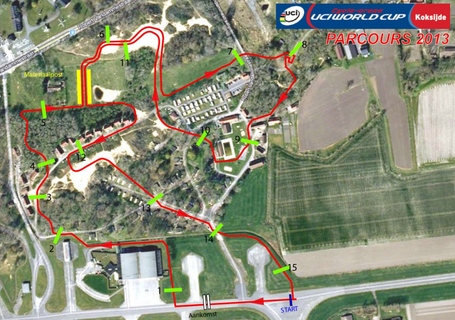 Here are your startlists. Nothing out of the ordinary, except less people than usual because each country can only send a maximum of eight riders. So, Belgium's contingent is pretty limited compared to Superprestige and bppost Bank races, but all the big guys are here. Sven Nys has won this race five times before over the past eight years and was last year's winner in a thrilling last-lap battle with Kevin Pauwels. Yes, Kevin Pauwels almost won this, despite his propensity for performing best on fast, dry courses. But Niels Albert also has some fine form at the moment and is probably the best sand rider of his generation, and of the next. Albert has won here twice before, once in a World Cup and once in the 2012 World Championships. On the women's side, Marianne Vos is still taking a break after having a minor surgery on her back so the question is really who will step up and try to challenge three time prior winner Katie Compton.

In the rankings, Katie Compton reigns supreme on the women's side and with Vos absent again, looks to hold onto that. She shouldn't lose, though Nikki Harris is lurking a mere 15 points back - the difference between first and third, or second and fifth - if a mechanical axes her chances. On the men's side Lars van der Haar leads Philip Wasleben by a healthy 160 to 135 point margin after winning the first two rounds. Though van der Haar is best on fast courses, he is a very capable sand rider - and a fast runner. If you need proof, watch him at Zonhovan the past two years. He hasn't been on the podium, but he's close and will likely finish well enough to preserve his lead, especially with Niels Albert and Sven Nys out of the picture for the overall.

Normally, choosing between Koksijde and Gieten is like choosing between getting a back massage from Bernie Eisel and having your leg eternally chewed on by a rabid hyena. It really isn't a fair fight.This year though, Gieten has changed. I still don't see it winning over Koksijde - not in a million years, but change is good in this case. Because oh my, Gieten was boring. Anyways, onwards to the new Gieten. Which is actually the old Gieten, because the race is going back to its roots. Rather than the usual flat grass crit, this year the race takes place in the forest and around a pond. Which means: sand. Beachy sand even, judging from the map. There's still a lot of straight stretches, but hell, it can't be any worse than what we used to get.

Rating: ♥♥♥(Neutral rating since I don't know what to expect either)

Video from last year (though the course is different, yay!): 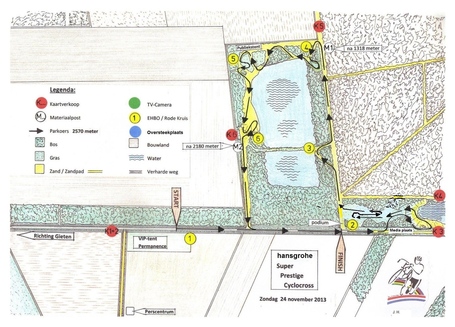 The startlist is pretty loaded on the men's side. This is a Superprestige race, after all, and that means ALL the Belgians and that Lars van der Haar and the other foreigners will be there too. On the ladies' side, there is less quality - Vos isn't there, and neither is Katie Compton, even though she is back over in Europe for a few weeks in a row now. Singularly focused on the world cups and world championships, those two are. But, we do get to see Matthieu van der Poel smash the U23 ranks again, which will be fun. Oh, and if you're keeping count, Mr. Superprestige Nys is in the lead with 58 points, followed not as closely by Niels Albert and Klaas Vantornout with 51 points apiece.