An American Classic is hopping on a bike.

Let me tell you a story from my past. It's not one I like to talk about much, but it needs to be said. I lived through the Blue Jean Wars. On the front lines.

New England, 1975 or so. I was still sharpening my hatred of standing out in any way, but it was far enough along for me to notice a clear consensus forming around me. One company, and one company alone, was to make our pants -- the Levi Strauss Company, a San Francisco outfit that had transitioned from outfitting gold prospectors to giving teenagers a standard for judging each other.

Levi's were everything... but they weren't the only jeans-maker, and the battle was joined. Some guys made it home from the Jean Wars in bad shape, like the Wrangler guys. Some ended up face down in the mud, their dense Toughskins label too large to miss. The Lee Jeans crowd defended their turf, I guess, but it wasn't without its cost. Levi's had routed the field.

But then the tactics changed. Suddenly, a whole host of new players entered: Jordache, Guess, Ralph Lauren, and I'm sure I'm forgetting a dozen more. "Designer" jeans (did Levi's not have designers?). Suddenly it was Levi's on the defensive, against an opponent less bulky, more diffuse, harder to find, let alone pin down.

This is what passed for excitement back in the 1970s.

Anyway, Levi's has carried on through several more decades, into a present time that looks nothing like the landscape scarred by the Jean Wars, where fashions come in more shapes and sizes than ever. Being a San Francisco company, it was hard for Levi's not to notice one particularly prevalent fashion: biker chic. And with it's new Commuter line, Levi's are taking aim at a pretty interesting market: reasonably-priced bike fashions.

Welcome to the Cycling Revolution, Levi's.

The Commuter is advertised as "designed for and by cyclists." It's not hard to picture a bunch of young designers riding in to work at Levi's Plaza, at the foot of Telegraph Hill in San Francisco's north end. And if there's one thing we know about cyclists, it's that they will seize any chance to convert their profession -- whatever it is -- into an adjunct of the cycling world. I have struggled to bridge the gap between salmon law and bikes, but for the cyclists at Levi's, clothing makes for a pretty short leap.

But it's the labeling that makes all the difference. By calling the line "the Commuter," Levi's is going less toward the uber-fashion and more toward the practical, recognizable, and relatable end of the cycling world. Other potential names for their fashion line could have been "the Fixie" or "the Rando" or the "Retro-Fred," or some other chapter from Bike Tribes. Someone should do this, and in fact someone probably has. But not Levi's.

You see, Levi's have always been nice, strong, durable jeans that looked sharp enough for people to obsess over -- but were not trying to be fashion forward or geared toward any smaller, funkier niche. This is mass-market gear. Don't push people away, either with challenging fashions or with prices. So "the Commuter," named after one of the more practical, ubiquitous cycling subcultures, makes good sense. Oh, and it's not just jeans -- it's pants (designed like jeans but in non-denim cotton), cropped jeans (knicker-ish) and trousers (designed like trousers) for the lower half, as well as shirts and jackets for up top. Apparently only for men. See it all here. 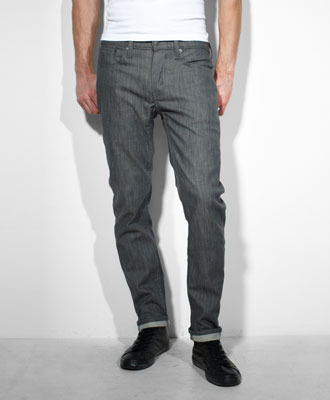 Levi's sent me two pairs of Commuter 511 slim-fit pants and a Commuter work shirt to check out and review. Now, these were not my first "cycling pants" (i.e. real, non-lycra pants that you can ride in). Last year, for my birthday, I stopped by the brilliantly-named Hub and Bespoke, a local bike fashion boutique (I know) and purchased another pair of very cycling-oriented jeans, which as far as I can tell represent the top of the market. They're called Swrve, they cost an amount of money that I'm not proud of paying, and they're the gold standard for biking jeans, as far as I can tell. So that's my measuring stick for the Levi's 511s, which I rode to work one day, as well as on a ten-mile errand afterward. Here's the performance breakdown.

What makes these pants biker gear is a set of features that aren't new to the bike world, though Levi's twist on them is. The Big Three of bike pants features is stretchy material, reflective fabric on the lower leg, and a place for your lock. The lock hanger is sometimes an extra belt loop or two, put for Levi's it's more of a slip-in strap: 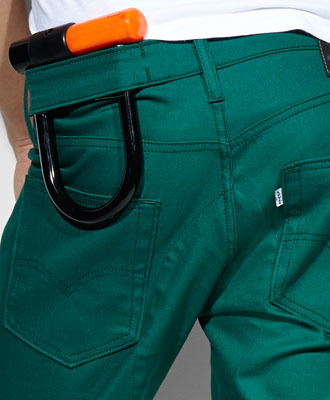 Pretty clever. I didn't ride with a lock hanging out, because I almost never do, but as hanging dense, metal loops next to your ass goes, this is as good and unobtrusive a solution as I've seen.

The reflective striping is where it needs to be, on the inside of the drive-side cuff, so as you roll up to avoid grease, you gain a reflector in their unique double-stripe design. And the stretchy material is stretchy -- more on that in a moment. It's also water-resistant, featuring their NanoSphere protective finish which I did not put to the test, for better (me) or worse (you). My hunch is that if you keep expectations realistic, you'd find that this is a nice feature. I doubt it would save you in a downpour, but in light Seattle drizzle or San Fran fog, this ought to come in handy.

The Commuter Workshirt is a medium-weight cotton(ish) shirt in the classic, no-nonsense Levi's style. It also stretches a bit, absorbs sweat, ventilates under the arms, and has a sleeve button for rolling up. 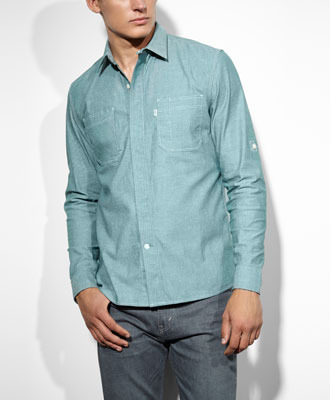 Check, check and ... well, it's too cold to roll up the sleeves right now, but I know enough about button technology to confidently predict success there too. The weight is nice: enough to block a little wind, without being too dense for wearing at work. It is a cotton shirt, which means I have to iron it now that it's out of the wash. So many crosses to bear... but it's a nice shirt.

Switching back to the pants. Comfort is the true test -- and they passed. Compared to the Swrve, the Levi's 511s felt like regular, stiff cotton pants as I put them on for the first time, and I had to check them a few times to confirm in my mind that they were stretchy. A little background: stretchy isn't just the obvious, I'm-moving-my-legs-around, concern. These are slim-fit pants. Yes, that's a fashion, but even if it weren't it would be a practical reality. Slimmer is less wind resistance, and more importantly, less loose material to get caught in various places -- in chains, over crank arms, on the saddle nose. So, if you want form-fitting pants, you need the stretch to get in and out of them, as well as to rotate your legs comfortably. And that's before we consider what a lot of bikers' thighs look like.

The Swrves feel like lycra to me, so comfortably stretchy that I could forget for a while they're jeans. The Levi's? I would not go that far, and as I was saddling up, I expected some resistance and discomfort. Didn't happen. Are they as stretchy and performing as the Swrves? Nope, but they're surprisingly close. After an hour in the saddle, I tried to think back to a point where I thought the Levi's 511 pants were at all constricting, and came up with nothing.

Oh, and after washing, I expected a bit of a fight to get them on again. These are slim pants, and this is the holidays, after all. But the stretch factor had my back there too. Slid right on, no questions asked.

Again, just on the pants here. The previous two factors are qualifying ones -- check those boxes, or else. Here's where you decide if you're actually going to buy them.

Taste is all yours, but I can tell you Levi's aren't departing from their 150-year hallmark of relative simplicity. They never tried to become Jordache, and they're not going to become Swrve now either. But it's a clean, timeless look, and as American as Levi Strauss himself. Wait, he was a German immigrant. OK, as American as the baseball I played in my old Levi's for about 10,000 hours. 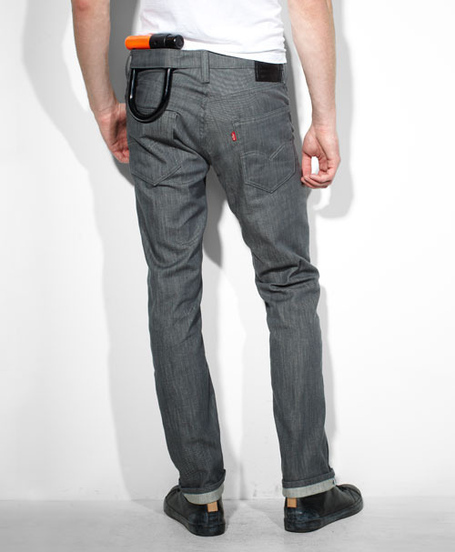 Which leaves price. The standard $88 tag shows up on all the pants, except they're marked down to $39-$58 at the moment, with the jeans shown above at $48. The pre-markdown isn't really all that much cheaper than Swrve, or perhaps some other designer labels. The reduced price, if that's the real market for Levi's, is a sweet deal. In my mind half the point of Levi's Commuter is to do what others are doing in a fully functional way, but for a better value. The two pricings leave me a bit confused about what their intent was, but as long as you can scoop these up for roughly half the cost of a pair of Swrves or other pants, who cares?