Merry Crossmas! It's About to Get Wonderful

Share All sharing options for: Merry Crossmas! It's About to Get Wonderful

The calm before the storm -- that's not just a grand tour thing. Cyclocross has gone a bit quiet in the past few weeks, with just a handful of one-off events for riders to keep their legs fresh. Why? Because the Awesome is on the way. It's CX Holy Week! Let's dive in...

They tend to come in flocks, cyclocrossers. Or they tend to live in flocks at least. Sven Nys and Niels Albert come from Baal and Tremelo respectively, two tiny villages so near each other that even slow-poke Google cyclist can get from hamlet a to hamlet b in 11 minutes. And then there's Essen - home to some 18.000 people, including three top cyclocrossers: Tom Meeusen, Bart Aernouts and Zdenek Stybar. Yes, Stybs of the Vuelta win fame lives in Essen, and will (most likely) show up for this race. He always does.

The Latest: Yep, he'll be there. Get the fainting couch ready.

It's incredible what a small world cycling is. Hoogerheide, site of the world championships, is barely across what passes nowadays for the border with the Netherlands. Kalmthout, scene of the most recent race, is the neighboring village, which itself is a few thousand tentacles up the road from the Scheldecross. Mathieu van der Poel could warm himself up nicely with a ride from his home (birthplace, at least) in Kapelle. Lars Boom would have slightly heavier lifting to do coming from Vlijmen. Maybe 40 minutes on his road bike. True fans could stop on their way to the race and pay respects to the Emperor of Herentals, who turns 80 today. Cyclists, and great races, really just sprout up from the fields around Antwerp.

The course itself is relatively flat -- this is the Schelde area -- and a zillion turns: 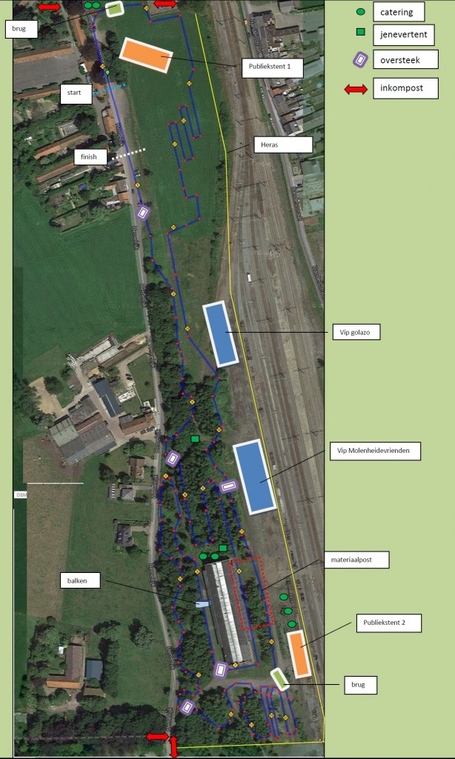 Last year Jens Denuwelaere was awarded the win when Stybar closed the door a little too hard in the sprint. And Bart Wellens won the year before, making this something of a race for guys who don't get a very big piece of the pie. With what's coming next, expect things to stay that way.

Series Implications: Sven Nys leads Niels Albert by 50 seconds and Klaas Vantournout by 1.08 in this goofy system. Pretty tight contest for the time being, but again, there are bigger stakes around the corner. And there are also four more rounds after Saturday, so this isn't terribly important. Look for the big guys to keep an eye on each other.

For the women, Wyman leads Cant by a mere 32 seconds, and while the same caveats apply, perhaps the narrow lead will lend itself to a feistier affair? And in the U23, Wout Van Aert and van der Poel are tied at 66 points. Battle to be joined.

Weather: Light rain, maybe. But it's been a tad dry, so no quagmire this year. Oh, and as to that quagmire, see for yourself:

The closest cyclocross comes to mountainbike is the Namur World Cup. It's around the citadel of Namur, and races around the citadel rarely disappoint. It's like a magical place of really good pure cycling. The inclines on the hills of WC Namur are very steep, both going up and coming down. They're also very technical, so to win a supercombo of skill and power will be required. Amongst the highlights of the season for me, this one.

The Latest: Maybe the toughest and most entertaining course in the sport. I guess it's a matter of taste, but I love watching the descents through the trees. Namur, in general, is pretty mesmerizing, at least on TV. The route is slightly changed this year, though the organizers make it sound like a meaningless change for the racers, just a little better for viewing. 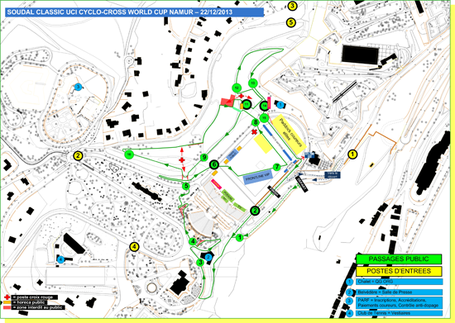 Obviously everyone who's anyone will be there, and that includes men, women, U23 and kids. Not much more to say other than that four different riders have won the men's and women's elite races the last four years.

One important wrinkle is the TV coverage: the UCI's youtube channel will have a live stream of the entire day, and reruns later. It's georestricted in the US, so, you know, do what you're gonna do about that (including buying access to it on Cycling.TV). Elsewhere, enjoy live women's CX racing from the very top shelf of the sport!

Series Implications: Namur is round four of seven, and on the men's side it's tighter than a properly packed shot of espresso grounds.  Lars van der Haar holds a slim two-point lead over Philip Walsleben (202-200) with Kevin Pauwels (190), Niels Albert (170) and Klaas Vantournout (161) hanging around. Van der Poel has a stranglehold on the U23 standings at 165 points, with Gianni Vermeersch (125) and Van Aert (111) the only two in shouting distance. And it's Compton (170) vs Harris (140) alone off the front, with Cant way back (111), on the women's side.

It's appropriate somehow, that the day after Christmas the peloton rides on holy ground. The area around the little chapel atop the hill is sacred, silent ground, so no spectators are allowed. The chapel is in the middle of a hilly pine forest, and since it's the end of December we could very well have a snow race on our hands. Which is kinda awesome.

The Latest: Another world cup, about halfway between Antwerp and Namur and a bit to the east. But you know Zolder. Rainbow jerseys are the local currency. Also known as the GP Erik de Vlaeminck. Not too shabby! 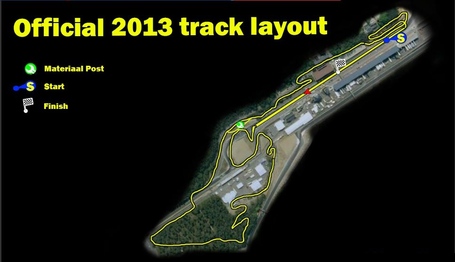 Amazingly, this is another course where nobody has a stranglehold, not even Nys, and in fact Albert has never won here. His excellent run of form may see his palmares change at last, but we'll see. The course itself is surprisingly tough, not featuring any iconic structures or hills but with plenty of very technical turns, particularly as conditions deteriorate. Nys battled Albert last year, but it's all in for everyone.

This is only the second running of a women's event, and last year Marianne Vos beat Compton and Cant here. Advantage Compton.

Series Implications: What I said before, except it's worth pointing out that van der Haar and Pauwels have crept up in the standings here on the basis of some faster courses that suit their styles early on. Party's over, at least for Little Lars. Still, there are some duds later on, so if he can stay close and only surrender the jersey by a small margin, he may get it in the end.

Weather: Wetter! So far Tuesday and Christmas Day are looking quite damp, so when the clouds part on Thursday, they could reveal some soggy slopes. Like these:

The most recognisable part about Azencross is the picture right at the top of this article: the washboards. It's more about work than skill this one, especially if the ground is soggy from winter rain. This year's Sunday date should be good for the race, 'cause it means Azencross is no longer wedged in between two cx weekends during The Holy Christmas-New Year Cyclocross Week that is the end of every Belgian calendar year.

The Latest: Not much to add more than a week out. We know Azencross will have the same old hook: the washboard jumps. Albert has owned this one three years' running, so with his hot hand this seems like a known quantity. Sanne Cant won on the women's side following a couple years of getting Vos'd.

Series Implications: Scroll up. More of this. If I'm right about Albert, he could be putting the heat on Nys here. In fact, since it's a favorable parcours, he'd be a fool not to.

Weather: More than a week out, they're calling for scattered showers, so make of that what you will. Here's last year's vid:

Superprestige Diegem, aka "the one in the dark". Yep, Diegem is raced at night (well, around 17:30h local time, at which hour le Belge is pitch black in winter*). So instead of the sun it is floodlights that illuminate this race, which brings with it a special atmosphere. It's that gimmick that's kept it on the calendar for this long I presume, because apart from the lack of light there really isn't too much to remark about this one. Obstacles of a miscellaneous nature.

The Latest: The lone SuperPrestige (dudes-only) event in the Holy Week lineup. Albert owns this race, with four consecutive wins thru last year.

Series Implications: Pretty big, as there are five riders separated by 13 points. Granted, the winner only gets 15, so that's a bigger spread than it sounds like. But Albert (66) needs to stick with Nys and Vantournout (58 each) to keep things under wraps.

It probably annoys Roger De Vlaeminck to no end, that Sven Nys has a race named after him and Roger doesn't. At the start of every year, Roger is reminded of this fact, as a Belgian new calendar always kicks off with the GP Sven Nys in his hometown Baal. It is, trust me on this, the best way to start the new year. A hangover, grandma's danishes and 'cross on tv. As for the race itself - it's, no surprise, one that De Kannibaal van Baal is quite good at: bunnyhop beams, technical descents and tricky corners.

Series Implications: Albert's ownership of Azencross pales in comparison to Sven's ownership of his own race. Eleven wins in 14 years? Not too shabby!

Weather: Too far out to say. Nothing interesting predicted just yet.