FSA Directeur Sportif: How To Create Your Own Private League

Share All sharing options for: FSA Directeur Sportif: How To Create Your Own Private League

Last year Superted, our app designer, added the "private league" function so that you can compare yourself/selves to the people whose teams you most dearly yearn to crush, without having to scroll through 1000 teams. It became a stroke of genius, because out of 1000 teams, 996 of them weren't winning anything official from the Cafe, and a healthy percentage of people delighted in having some other form of competition ongoing even after the error of their "I blew my budget on Gilbert" strategy became apparent. FSA Directeur Sportif players everywhere used the function to joust with their friends and family. I celebrated by losing to my son (but beating my brother). Prizes were dangled. Really, the limit is people's creativity, which is to say, it wasn't limited.

Now, we're back and raring up for the new year. A few people have queried how this works, so I thought I'd give a quick tutorial. And it goes like this: [But before you get any further... this function doesn't work until your team is submitted! So finish up that part before you go here. OK, back to it...]

Here is a screenshot of the "my team" tab, scrolled down to where the private sub league stuff is: 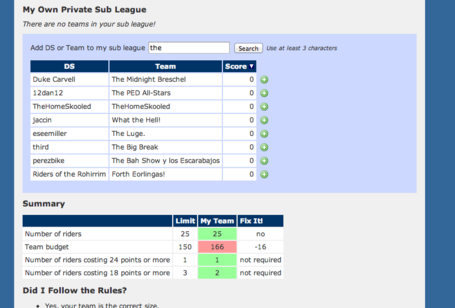 Here, I did a search for the word "the" and brought up a handful of teams. You need a few letters from your target team or DS to conjure them up. Like any search, the more you know, the better. Here is a screenshot of my finished product from last year. Apart from ridiculing the results (tell me something I don't know), this shows you a league in motion. Notice, the red "-" buttons are still there. You can change your league at any time. 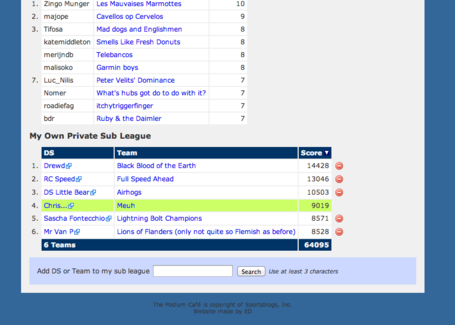 One last note: My creating this league had ZERO effect on the players I put in my league. This lineup existed on my page alone. If you are really in a league and have a robust competition, then the other players will want to do the same setup. Every player has to do their own construction of your private league for it to appear on their "my team" tab.

This is preferable to setting up a league once, in one respect -- anyone who isn't in an explicit, planned multilateral competition can create their own private league of whomever they would like to measure themselves against. Here I chose a couple friends who don't know each other, plus my brother and my two kids. RC Speed (I am told) chose me and a few co-workers for his private league. My kids just chose our immediate family members. In other words, every individual can compile their own unique list of people to measure against, and it can consist of people who are reciprocating, or not.