RCS Sport, the owner and organizer of the Giro d'Italia, Tirreno Adriatico, and Strade Bianche, announced the revival of a classic Italian one-day race, the Roma Maxima. Well, the race is essentially a re-branded Giro del Lazio, but the new title sounds so much more exciting doesn't it? The race will run on Sunday, March 3, the day after Strade Bianche.

Years ago, the Giro del Lazio was a standard in the Italian spring race calendar. It had just enough climbing to force a selection, as many Italian one-day races do, but ended with a flattish finish that was home to many a small group sprint or tactical racing from breakaways. And while Italians have taken the race more seriously than other nationalities, it has been won twice by Roger de Vlaeminck. Francisco Moser and Andrea Tafi have each won the race three times and more recently Filippo Pozzato, Juan Antonio Flecha, and Michele Bartoli were each winners in 2005, 2004, and 2003 respectively. In the final years of the race from 2006-2008, smaller name Italian riders won as the race, even though it was classified as a 1.HC event by the UCI, the same ranking as Omloomp Het Nieuwsblad and E3 Prijs Vlaanderen.

Now, the race has been revived, rebranded, and juxtaposed alongside Strade Bianche to make for a full weekend of Italian racing. Both events are organized by RCS and will have similar teams participating, though with a few switches. While Blanco Pro Cycling Team, Garmin Sharp, and Radioshack Leopard are racing Saturday on the white roads, they are replaced with the smaller teams Caja Rural and Colombia in Sunday's race. Expect a similar roster of riders as well, though the bigger names may take aim at winning Strade Bianche and use Roma Maxima as mere race miles - think of it as the Italian version of the E3 Prijs / Ghent-Wevelgem and Omloomp Het Nieuwsblad / Kuurne-Brussels-Kuurne weekends.

While the Roma Maxima route is largely the same as prior editions of the Giro del Lazio, RCS Sport hopes to include a section of the Appian Way in this year's course. You history buffs will remember this road, one of the earliest ones created in the Roman Empire to link Rome with the southern half of the peninsula. Once a marvel of engineering and empire planning, the roadway is now a rough collection of cobbles. No, I don't mean those ubiquitous tame "cobbles" in city centers, I mean rough, jarring, dangerous cobbles like revered ones in the low countries. 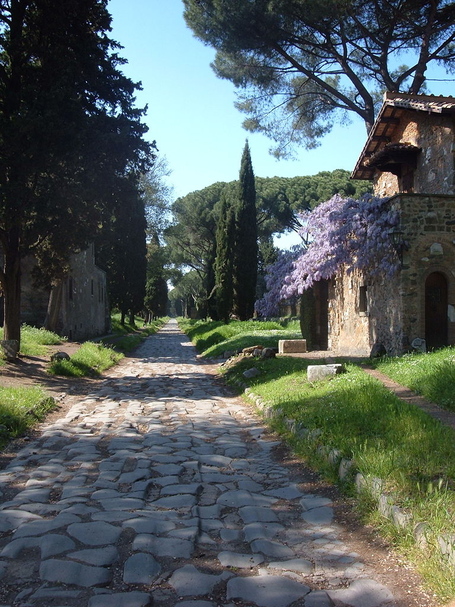 The Appian Way cobbles are not the nice, groomed ones you are accustomed to in Italia. Picture from Wikipedia Commons, used with permission.

Do we need another Italian one-day race, especially in a time period so full of racing already? Tirreno Adriatico starts on March 6, leaving a mere two days of rest between for riders planning to fine tune their classics form there. I can't yet predict what this will change for riders, but I can answer a resounding YES to the first question. The course and terrain should provide for entertaining racing and, hopefully, a chance to see a preview of the weeks to come in late March and early April. For your viewing pleasure, we close with the route map and profile for the races. 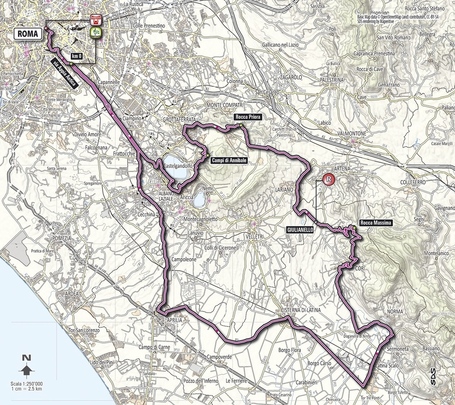 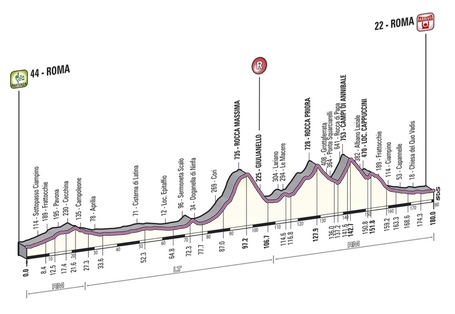