Saturday 23rd February, 2013 It's freezing in Flanders, doubtless raining, sleeting and maybe even snowing.... so you can bet that the hard-women of the peloton are rubbing their hands with glee, and looking forward to getting onto the cobbles. The UCI season may have started in the deserts of Qatar, but this is the European season opener - bring it on!

It's actually really hard to write this preview, because my fingers just want to type COBBLES!!! CLASSICS!!! FLANDERS!!! COBBLES!!!! RACING!!!! over and over again until my fingers bleed, but I'll do my best. But isn't it great that the European season is underway? I loved the Tour of Qatar, but it just whetted my appetite for the Classics. I'll talk about who's riding and what they're racing, but here's a video from last year's Omloop het Nieuwsblad, when Orica-AIS' Dutch attack specialist Loes Gunnewijk won in a two-woman sprint against Specialized-lululemon's Ellen van Dijk, with Van Dijk's team-mate Trixi Worrack taking third place out of a group of eight super-tough riders...

So, what are they racing? Well, it's 125km, and much more simple a course than the men's parcours. There's a different starting point to the men, and the two routes only share the final third of the course, from outside Oudenaarde to Gent - but it takes in plenty of exciting, iconic, amazing, historic spots en route. Here's the map: 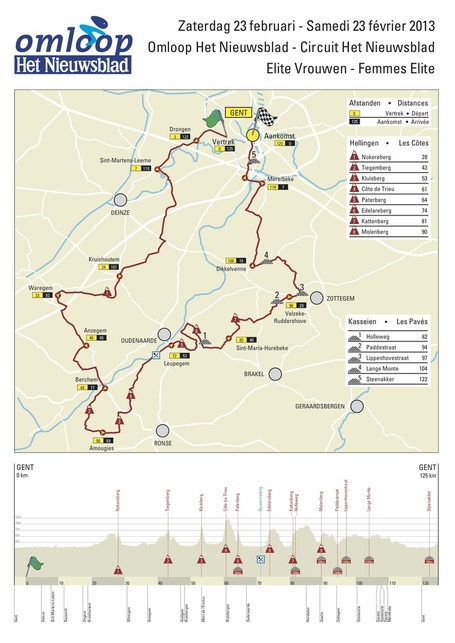 Doesn't that look great? Eight of those short, tough Hellingen, including the Kluisberg (1.8km, ave 6.3% and max 14%), the Paterberg (380m, ave 13.7% and max 20%) and the Molenberg (500m, ave 9.8% and max 14%) - and you just know that every time they reach one of those, there'll be an attack. The last of those climbs is at 30km to go, but those 30km include four of the five major cobbled sections, including the 2.3km Paddestraat, 1.3km Lippenhovestraat and the 2.5km Lange Munte sections. But don't listen to me talk about it - look up the route on googlemaps, and just imagine what it's like to ride in the cold and the rain and the sleet and the snow... aren't the riders amazing?

I know, I know, I'm being sadistic - and it's important not to be blasé about the risks of crashes. Here's our own Broerie's advice for anyone racing:

Also you may want to warn the riders that the road after the Paterberg descent is in a terrible state: potholes of 10 cm deep, with a diameter of 40 cm,… It’s the most dangerous part on the women’s course.

Here's to a race that's safe above all.

EDIT!! Broerie rode the course last week, and he's got some great insights into the course, and where the action will happen, in the comments below - thanks Broerie!

Who's racing? And who should we look for?

Here's the startlist - but it seems like it's possibly not finalised - riders like Nettie Edmondson and Dani King are racing today at the track World Champs right now, and Kirsten Wild, I thought, was due to race the omnium there. So treat it as subject to change.

The number one team on the list is Orica-AIS, and I'm finding it hard to look past them for favourites. Have a look at the roll of honour, and you'll see why...

Orica have the reigning champion AND the only rider to have won it twice, who's also the only rider to have been on the podium three times. Emma Johansson has to start as the favourite, really, and is my bet for the win, but damn, that team is super-strong - and I keep being reminded of how, when Judith Arndt won the Ronde van Vlaanderen last year, the key early break was forced by Tiffany Cromwell attacking on the cobbles....

If we're playing look to the past, Specialized-lululemon had two riders on the podium last year, and Qatar showed how strong both van Dijk and Worrack are this year. Worrack, especially, says the colder and nastier the weather she is, the more she likes to ride, so my money's on her getting a podium spot this year. They also seem to have Ina-Yoko Teutenberg down to race there! Ina! Such a legend! So much for all her "I'm so old and tired and can't wait to retire" blogs from last year! AND they have 2012 Flèche Wallonne winner Evie Stevens - and given that every year of her career, Stevens has gone away and worked really hard over the off-season, and made significant improvements in her racing, who knows what'll happen this year? EDIT! We won't be seeing Stevens there - she's in the USA

Rabobank-Liv/Giant don't have Marianne Vos there (she's in Cyprus, mountain biking) but De Vocht is always great at this kind of race - and Annemiek van Vleuten won the Ronde van Vlaanderen in 2011, so she definitely knows how to win on this parcours. Iris Slappendel is a superb Classics rider, too - don't be surprised to see her attacking in all the crazy places.

My third bet for a podium spot comes from Hitec Products UCK - Elisa Longo Borghini. You will remember her from her World Championships bronze medal last year, and from her many, many Best Young Rider jerseys and great results all over. She was 7th here last year, and her team-mate Chloe Hosking won the bunch sprint for 12th, leaing the peloton in - and Qatar proved just how well "the biggest little team in cycling" are already working together.

Then, there's Boels-Dolmans. Martine Bras is a genius at this kind of day race, a completely consistent, tactically spectacular canny rider. I can't imagine her not coming in the top 10, if bad luck doesn't get her. And Lizzie Armitstead surprised us last year with her cobbles power - in previous years she's been focused on the track at this time in the season, but last year she was all road - winning Gent-Wevelgem and Tielt-Winge, and attacking early and often to support her team-mate, Kirsten Wild, for many Classics wins. Was that a fluke, or was it just the beginning for Armitstead in the Classics? We'll soon find out!

The final team I want to highlight for Saturday is Tibco-To The Top, showcasing their new line-up. Their sprinter, Shelley Olds, hasn't raced this before, but she's shown us time and again that she can get over hills and thrive in tough conditions, and of course, young Dutch star, Chantal Blaak, was on the podium in 2011. Then there's Claudia Häusler. If anything, it might not be hilly enough for her, but I would love to see her back on top. It seems like since her horrible injury in 2010 Giro Toscana, she's been slowly building back up, with a win at the Exergy Tour last year, and coming 8th in the Giro Donne....

Hopefully I've got you excited for this race, but now for the bad news.... we're back to the lack of tv coverage. Last year Sporza included a short clip of the finish line (now gone from their site) and, you know, fixed finish-line cameras, how hard can it be to show the results? But don't hold your breath. We hope information about the race will show up on the main race twitter etc, but let's just say that publicising the women's races is one area the Flanders Classics could improve on.

Instead, I direct you to my usual, and wonderful triumverate of twitter geniuses, to whom I am always, eternally grateful to for in-race twitter coverage. Karl Lima, the Hitec manager, Manel Lacambra, the Tibco DS (welcome back to women's cycling, Manel! We missed you!) and Richie Steege, the Boels-Dolmans mechanic, all deserve some kind of medal for their work promoting women's racing, so follow them - and if you find ANY information about the race on the day, add it here, or in the main race livethread.

The race starts at 11:20 CET, and is estimated to finish between 14:47 and 15:11, which is very roughly round-about when the men will be at Horebeke to the Kruisberg (if they're fast) or Kruisberg to Eikenberg (if they're not) - here's the full women's and men's timetables.

If you'd like to push for more coverage of women's races, why not take 5 minutes and email or tweet your favourite race coverage provider, and ask if they'll be showing it? I tweeted Sporza and the Global Cycling Network, and GCN won't be covering it (no reply from Sporza) - but at least if you ask, it shows that there is an audience. And it is #ClickThruThurs after all, so a great time to take a tiny bit of time and hopefully help change things in the future (in case you missed it, here's my interview with Amber Pierce, where she discusses all things Click Thru Thursday, and what it can mean for women's cycling)

For more information, check out the race website - and if you have any questions, ask away in the comments. Don't forget to check back there for all kinds of useful information from other people - and think of me on Saturday, when I'll be roadside somewhere in the cold and the rain and the snow - grinning my head off! Cobbles! Climbing! Attacks! I cannot wait!!!