The Spanish Tours Season kicks into... well, lower gear, but it's on baby!

Share All sharing options for: Notes from the Spain Desk: Double-Classic Weekend!

When last we met, one week and 700 FSA DS reminders ago, the Spanish Mini-Tour Season was kicking off in Andalusia, the southern swatch of Spain containing some of Europe's more desirable winter destinations, especially if you're a cyclist. Well, and especially if you're Alejandro Valverde.

The Green Bullet kicked off what promises to be another fruitful campaign with two stage victories (including a prologue), a second-placing and a pretty straightforward win in the Vuelta a Andalucia/Ruta del Sol. I had promised a preview, but both video and details proved scanty, on top of the madness of FSA DS Deadline Week, so know simply that Valverde is on top form, there was a decent amount of climbing, and nobody stole Garmin's bikes. Jonathan Hivert, whose French name almost translates into the one season of cycling in which results should not be taken too seriously, took the two sprint finishes, while northerners Jurgen Van Den Broeck and Bauke Mollema gave Valverde a run for the money with podium finishes under the (cough) sun.

It wasn't exactly all sunshine and roses in the Route of the Sun, with one certifiably classic-like day and a couple others where the arm warmers never came off, particularly in the higher altitudes, and the Spanish winter should continue to behave a bit like winter as we hit the next round of regional events -- the last two in the "I don't really care" category before the big-time Spanish Mini-Vuelta Season kicks off in Catalunya in three weeks. Let's take a look at this weekend's last go-rounds for the Iberian Peloton.

The former five-day mini-tour and all-round celebration of local boy Valverde, this year's Murcia is pared down to a financially palatable single day of racing, making it the Clasica a Murcia for the first time in its history. Not that this should disfavor Valverde; if it's in Murcia, it favors Valverde. This is, after all, the race which barred Italian teams in 2010 because the Italian Olympic Committee had banned Valverde from racing in Italy due to his Operacion Puerto connection, for which he was later suspended. Note, Italian cycling teams do not run the Italian Olympic Committee... but this distinction was too fine for the Valverde Appreciation Society in Murcia.

I guess in that sense, you get what you deserve, and if karma is going to chop your race down to one day, it might as well be one where your guy is the favorite to win. And so, we have a parcours that could not favor Valverde much more than this. 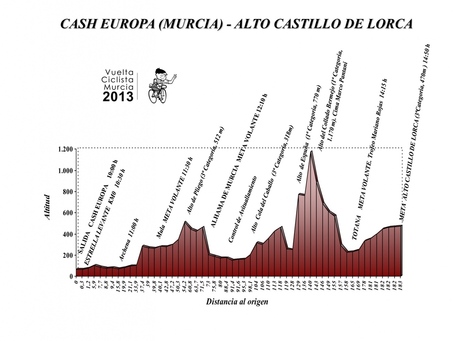 As usual, the profile makes it look like the key pass, the Alto de Espuña/Collado Bermejo, can't be summited without shredding everyone's tires. A more realistic profile of that climb looks like this:

[h/t Altimetrias.net, a/k/a the website WillJ would have created if he were Spanish.]

The point of it all is, it's 31km of climbing to an altitude of 1580 meters, with some rough stuff near the top, though all well within the reach of the top climbers. The course then drops back down to the valley, eases back up again, and ends in a power-sprint. None of this favors anyone besides Valverde. Absent is defending champion Nairo Quintana, one of Valverde's Movistar teammates, so it's all for Valv Saturday. There are other teams, however, and of the lot Sammy Sanchez of Euskaltel-Euskadi has enough of a sprint on him to keep Valverde alert at the end, as does Davide Rebellin (CCC-Polstat), but the rest of the peloton is loaded with climbers who will take whatever they can when the top three are done sprinting.

The next morning, a largely similar group of folks will contest the Clasica de Almería about 200km southwest of Murcia.

Before we get any further, click here for the soundtrack to this preview. [Bad Teeth Warning!]

There's a chance we are looking at a repeat of the previous day, as the race looks approximately like this: 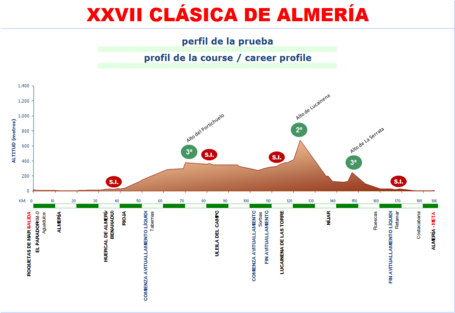 In other words, it's Murcia with half the altitude. Alas, I tried to find information about the Alto de Lucainena, but it took me to a bunch of dating sites. Anyway, Theo Bos won here recently, and Michael Bling Mathews last year over the same course, so it's not terribly selective.

Which raises the question, is Valverde going to win again? The finish has a slight uptick to it, but it's a sprinters' finale. Valverde remains a favorite, but among the sprinters in attendance will be Mark Renshaw, JJ Rojas, Francisco Ventoso, and the red-hot Jonathan Hivert. My money is on Hivert for the win, given the past week, so Green Bullet fans (?) shouldn't get too cocky just yet.